A portrait of Robespierre by Adélaïde Labille-Guiard

For the dominant figure of his age, there are surprisingly few authenticated portraits of Robespierre and those that exist are surrounded by question marks. Two notable early portraits were exhibited in Paris in the open Salon of 1791. The first was a pastel by Adélaïde Labille-Guiard, one of a collection of fourteen studies of deputies of the National Assembly. We know that this portrait was one of the very few for which Robespierre, still an upcoming figure, granted a formal sitting. Buffenoir quotes a letter from Robespierre to the artist dated February 13, 1791 in which he accepts her request in mannered tones,calling upon “The Graces” and suggesting that a “jealous God” was hindering his activities.[The letter is in the British Museum among the papers of Lord Egermont, who was given it by Labille-Guiard's husband, the painter Vincent.] The picture was noteworthy for its label, "the Incorruptible" - one of the first uses of this epithet for Robespierre.  It attracted much praise, though some writers felt that pastel was an unsuitable medium for the subject.(See Buffenoir, Portraits de Robespierre, p.250-2)

Where is this portrait now?  For Buffenoir, writing in 1908, Labille-Guiard's work was simply  "lost".  But nowadays this famous oil painting at Versailles, by the 19th-century artist Pierre-Roch Vigneron, is almost universally identified as a copy. According to the notice on the Agence photo website, this is "a copy of the pastel portrait of Adélaïde Labille-Guiard, falsely signed "after Danlou" " It is a beautiful portrait, showing a youthful looking Robespierre in the sombre but still sumptuous uniform of a deputy of the Third Estate.

However, there are problems in accepting this as a copy of Labille-Guiard's work. The original for Vigneron's painting was in fact known, and is possibly still extant.  It belonged to the well-known 19th-century collector François Marcille, then passed to his son Eudoxe Marcille, the director of the Musée des beaux arts in Orléans and subsequently to the latter's daughter Mme Jahan-Marcille.  François Marcille had attributed it to Pierre Danloux and penned a note to that effect, though other early commentators  were uncertain.  Buffenoir concluded reasonably that it could not be the Labille-Guiard since, like the copy, it was an oil and not a pastel (p.251). I am not sure why experts now disagree with him, but there are still dissenting voices. In particular Neil Jeffares in the Dictionary of pastellists states categorically:"These versions of a painting possibly by Danloux, are unrelated to Labille-Guiard’s lost pastel".

It would be interesting to trace some of the companion portraits by Labille-Guiard - Beauharnais, Talleyrand, d'Aiguillon, Duport, the abbé Maury, Lafayette, Alexandre and Charles Lameth -  most of them the Feuillant deputies who by the summer of 1791 already ranked among Robespierre's bitter enemies.  These might still exist, but if so, they are not to be found on the internet.

A portrait of Robespierre by Joseph Boze

Joseph Boze too exhibited for the first time in the open Salon of 1791, like Labille-Guiard submitting a number of pastel portraits of leading Revolutionary politicians, including Robespierre. The inevitable comparison did not work to his advantage; one critic advised Robespierre to stick to women painters for his portrait, while another said Boze’s work was “dry, cold, monochrome and incorrect”, the  Robespierre "too yellow and pale". Other writers, however, came to his defence and praised the portraits, particularly those of  Mirabeau, Lafayette and Robespierre, for their close resemblance and varied skin colouring after nature.  According to one commentator, the pastel of Robespierre was "an incredible resemblance" of the "Incorruptible Legislator" and "Friend of Humanity", since Boze had had the great good fortune to see, speak to and perhaps even touch the great man.   ("Lettres analytiques, critiques et philosophiques sur les tableaux du Sallon [de 1791]" ,reproduced in Revue historique de la Révolution française, vol.3, p.13.)

On the face of it, we fare rather better in identifying Boze's Robespierre. 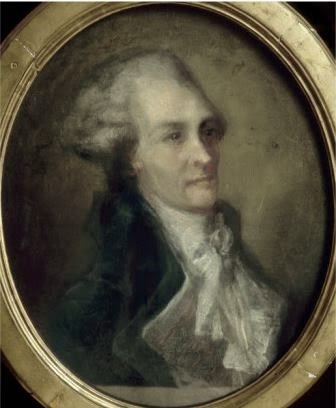 Gérard Fabre in his exhibition catalogue, Joseph Boze, portraitiste de l'Ancien Régime à la Restauration (2004) and, following him, Neil Jeffares, point to this pastel from the Musée Lambinet.  It is a strange and slightly disappointing picture; it is certainly pale and yellow and, even allowing for Boze's tendency towards elongated faces, a surprisingly angular Robespierre.

Another possibility is the portrait below, mentioned by Buffenoir as possibly by Boze.  Buffenoir says it is an oval medallion, showing Robespierre facing straight out against a very dark background, wearing a coat with large lapels and a high white cravat with a bouffant knot.  This picture was said to have been offered to the Cabinet des Estampes by Marat's sister. (p.645-6) ; a reproduction (of Buffenoir's plate?) is commercially available on the La Scala site and it is also illustrated in David Jordan's Robespierre (Plate VII). There is a little confusion about the medium;  Buffenoir refers to a sketch, whereas Jordan says it is an oil painting. 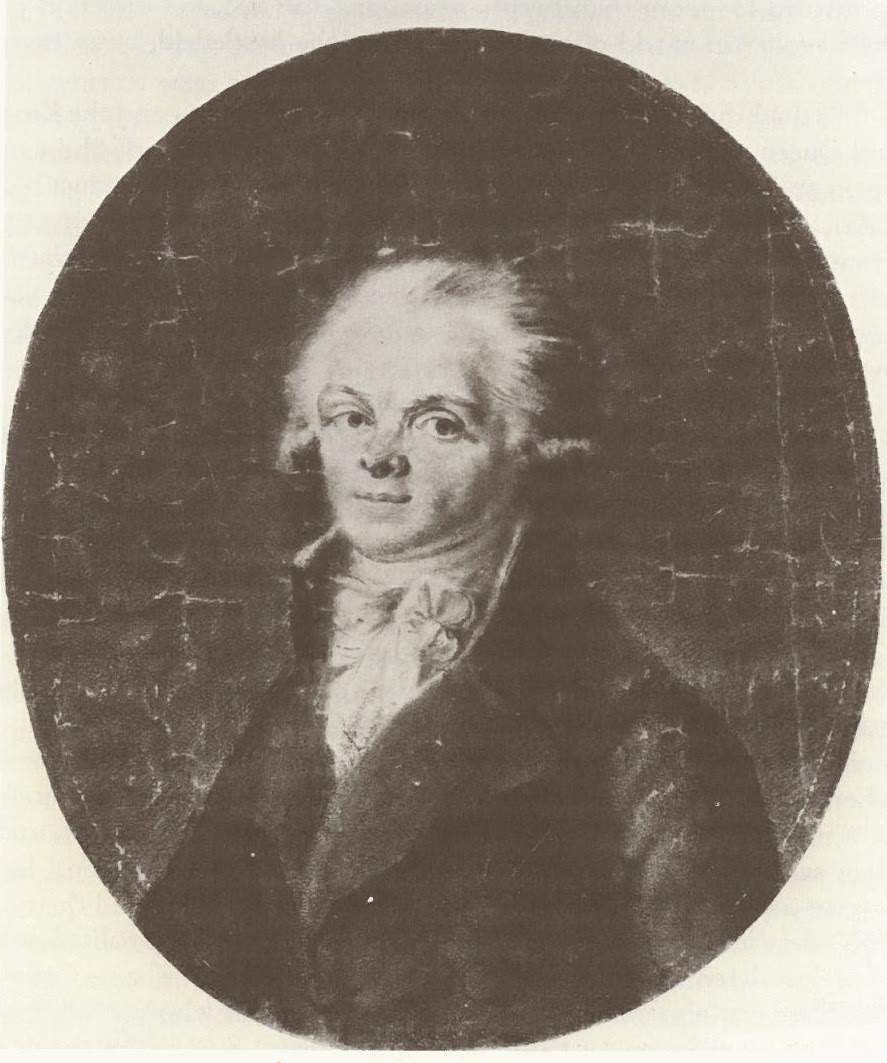 However, the  picture is  similar in style to Boze's pastel of Mirabeau at Versailles - a portrait with impeccable provenance. It seems quite likely, therefore, that this is a pastel, or preliminary drawing for a pastel.   Might this,therefore, represent the 1791 pastel?


A portrait of Robespierre "after Boze" which turned up at auction in 2008  clearly bears a strong resemblance to the painting.

It was one of a set of "standing deputies", others of which - the Mirabeau and Marat - are certainly based on Boze originals.  It is known that Boze himself disliked painting feet and his few full-length portraits were painted in collaboration with others.  There are other examples of the standing Mirabeau - one in the Musée Granet in Aix-en-Provence, and a copy at Versailles.


Comparison of the Boze with the Labille-Guiard/Vigneron picture reveals the same, surprisingly gentle features - far indeed from the stereotype of Robespierre as a harsh and implacable Revolutionary.  This is what David Jordan says:

The Boze portrait is of an intense, frank young man with exceptionally prominent eyes and a neutral expression.  Perhaps because of the background Robespierre appears solid, almost sculptured.  The Labille-Guiard portrait emphasizes the mouth rather than the eyes and shows us a congenial, sweetly smiling young man whose elegant hands add to the overall impression of conviviality and ease.   On first glance on might not think these portraits of the same man, but all the features are the same if the spirit informing them is not.  The Labille-Guiard portrait is the only one of Robespierre smiling, and the gentleness of expression and the open congeniality are characteristics we do not normally associate with Robespierre.(p.250)

David P.Jordan "Portraits of Robespierre" Appendix to The Revolutionary career of Maximilien Robespierre (1985)