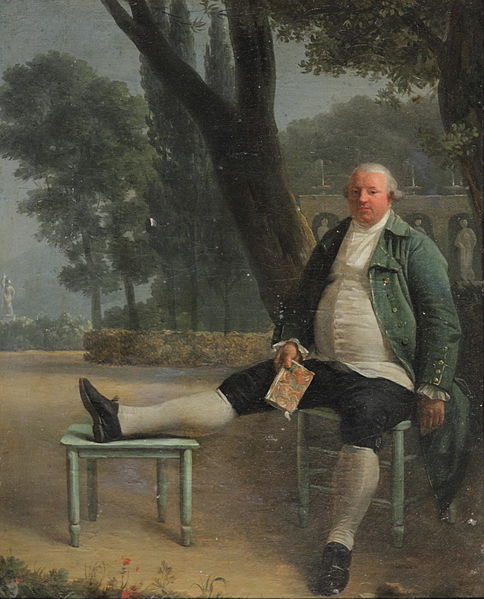 In 1783, when Danloux returned from Rome to Lyon and Paris, the Mégret de Sérilly family became his most important patrons.  The artist is known to have spent the summer of 1784 in Passy and in 1787 married Antoinette de Saint-Redan, Sérilly's adoptive sister.  Since Danloux stayed in the household and married into the family, it may be assumed he painted them often. However, there are only a few portraits documented.

This marvellous study of Antoine de Sérilly is the only one of Danloux's portraits reproduced in good quality on the internet. It was contributed to Wikipedia / Wikimedia in 2011 when the painting was included in the exhibition, Petits théâtres de l'intime,  held in the musée des Augustins in Toulouse (22nd October 2011 - 22nd January 2012). There is no further information available, other than that it belongs to "a private collection".

We can still enjoy the image.  It is probably about 1784, the sun is shining and the affable baron is sitting in his garden, resting his gouty leg on a stool.  [It ought to be possible to identify the location, if it is real, from that splendid Classical portico affair; perhaps it is the estate at Passy, or the adjacent domain of Thiel, (where the gardens had been replanted, though the house was neglected)].  M. de Sérilly is stout, relaxed and occupies his space confidently. His clothes are understated and casually worn, but you can see that the material is fine;  I love the way his waistcoat strains over that magnificent paunch and his stocking wrinkles uncooperatively at the ankle.  Notice too the book that he is holding; with its marbled endpaper but no binding, this is a real book, meant for reading.

Oliver Meslay, former conservateur at Louvre and now director of the Clark Institute of Art in Williamstown, Massachusetts, is an expert on Danloux, and is preparing a catalogue raisonnée.   He underlines the importance of the family in Danloux's career:
Of all the families of Enlightened nobility at the end of the Ancien Régime, the Mégret d'Etigny / de Sérilly were at the centre of Danloux's social relations. Here, as elsewhere, a new spirit of change blew, and new intellectual movements found their echo.  In the generation of Danloux, Antoine Mégret de Sérilly, the Treasurer General of War, son of the intendent d'Etigny, was a central masculine figure.
Olivier Meslay, article in  Bulletin de la Société de l'histoire de l'art français (2006)

There are two other known Danloux portraits:

Olivier Meslay comments:
In 1783 [Danloux] represented   the widow of the intendant,  née Françoise Thomas de Pange.  The artist created a magnificent portrait, treating perfectly the fabrics, the play of light on polished wood, the details of the tapestry frame.  It is an intimate image of the wife of a great official of state.
Olivier Meslay, article in Bulletin de la Société archéologique du Gers, avril 2004, 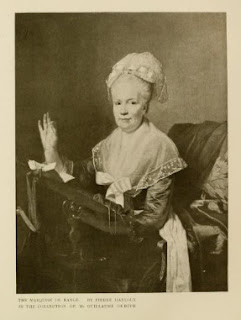 Three versions of this painting are known:

[Mégret de Sérilly] can be seen in the great portrait of the family, warmly embracing his wife, surrounded by his children and his adoptive sister, in the background a painting of his mother and a bust of his late father...
Olivier Meslay, Bulletin de la Société de l'histoire de l'art français (2006).
Versions:
The oils are illustrated in "Danloux", Hubert Duchemin (auctioneers)           http://www.hubertduchemin.com/fichiers/Danloux.pdf 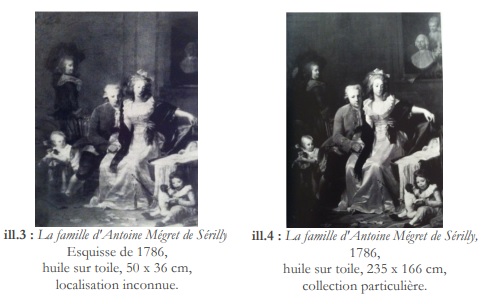