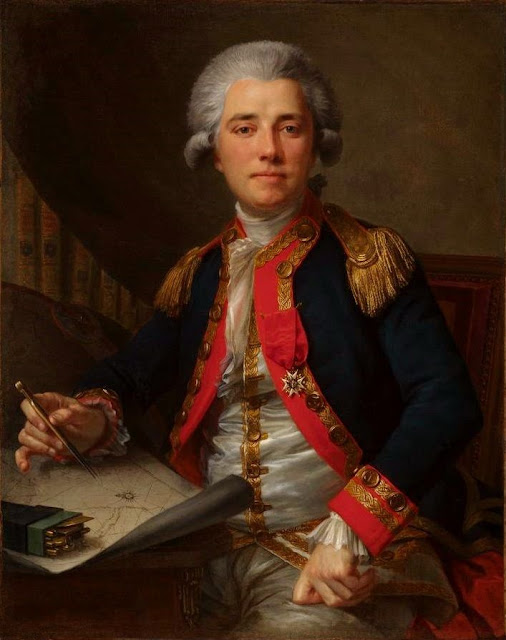 This striking portrait is not quite a new acquisition, since it was given to the Fine Arts Museums of San Francisco in 2008, but it has only very recently appeared on the internet and does not seem to have been previously documented.  The image on Wikipedia was uploaded on 26th September 2017.  It was uploaded to "FineArtAmerica" on 30th October 2017 (so now you can buy a La Pérouse tote bag or yoga mat.....).

There is not a lot of information to be had.  According to the FAMSF website, the picture was one of a number of 18th-century artworks given to the museum by New York society benefactress, Mrs. Clarence Sterling Postley of Locust Valley.  It is attributed to Greuze's pupil Geneviève Brossard de Beaulieu, or possibly to Greuze himself, and dates from 1778. If this is indeed La Pérouse, he would have been aged thirty-six or seven and had recently returned from service in the Indian Ocean.  He wears the uniform of a lieutenant de vaisseau and sports the Order of St.-Louis which awarded to him in the previous year for his defence of the trading post of Mahé in the Seychelles.
The notice specifies that the picture is "not on show", which seems a shame given its obvious quality.
FAMSF collections:
https://art.famsf.org/marie-ren%C3%A9e-genevi%C3%A8ve-brossard-de-beaulieu/comt%C3%A9-jean-francois-galaup-de-lap%C3%A9rouse-2008782


The picture may be compared to the fine portrait from the musée des Beaux-Arts, now musée Toulouse-Lautrec, in Albi, which has always been identified as by Greuze. La Pérouse is older here but it could certainly be the same man. There is little information to be had on this painting - I cannot find a photo of it on display in the museum;  the illustration on Wikipedia comes from the Larousse encyclopedia. Here are some mentions culled from Google Books (which may or may not refer to this portrait):


Few other contemporary images of La Pérouse are known.

The main source of reference is provided by the catalogue to the Centenary exhibition of 1888, which was  published in the Bulletin of the Société de géographie. This included a number of portraits and other personal objects, collected by descendants of La Pérouse's two sisters.
http://gallica.bnf.fr/ark:/12148/bpt6k377277/f367.item.r=laperouse

No.55 of the 1888 catalogue:  La Pérouse aged twenty.
"A well-preserved pastel: according to family tradition, this portrait was the only one to represent La Pérouse faithfully.  The artist is unknown".  Belonged in 1888 to the general Dalmas de Lapérouse; now in the Musée Lapérouse in Albi.

This is quite a crude image and depicts a surprisingly corpulent young man. 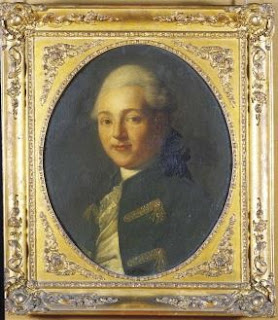 This is another undocumented portrait, reproduced on the internet for the first time when it was exhibited in the 2008 exhibition at the Musée de la Marine..  It is identified as: "Oil on canvas.  Attributed to François-Hubert Drouais.  Private collection".  Perhaps this is the original for the Albi pastel?

In December 2002  the Association Lapérouse Albi appealed for donations to buy a portrait which was offered for auction by Drouot in Paris.  Sadly it turned out that the label identifying the sitter as La Pérouse was a later addition, and it was decided not to pursue the purchase.
"Compte à rebours pour Lapérouse", LaDepeche.fr. 13.02.02
https://www.ladepeche.fr/article/2002/12/31/400748-compte-a-rebours-pour-laperouse.html


4. Set of miniatures commissioned by La Pérouse in 1777

The Centenary catalogue notes the existence of a pair of miniatures which were sent by La Pérouse to his sisters in 1777, after he been made a Chevalier de Saint-Louis.  This would make them exactly contemporary with the San-Francisco portrait.   Even in 1888 one of them seems to have been known only from a copy:  the reference is No.54: "Oil painting by his great-niece Mlle Anna Prunet after a miniature" , collection Barthez Lapérouse (family of the younger sister in Albi).  The second, No.56, belonged in 1888 to Henry Peyronnet, a descendant of the older sister.

I think the oil painting mentioned is probably the one in the photo below, which shows the interior of the château du Gô with its current owner Jean-Marie Pestel, a descendant and current president of the Association Lapérouse in Albi. 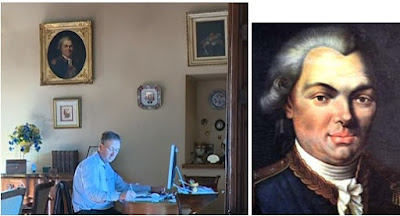 The earliest prints, including the engraving by Alexandre Tardieu of 1793 that was the frontispiece to the first editionof the Voyages, and an English variant by Thomas Woolnoth, are all modelled on the Albi miniature ("a Miniature in the possession of La Pérouse's niece at Alby"). In these images La Pérouse appears noticeably fatter than in the San-Francisco portrait.  To judge from the oil copy in Albi, this is partly the way the original has been interpreted, or may be it is an authentic memory of the older man? 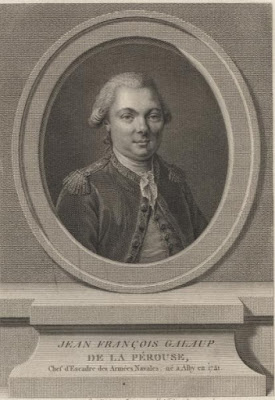 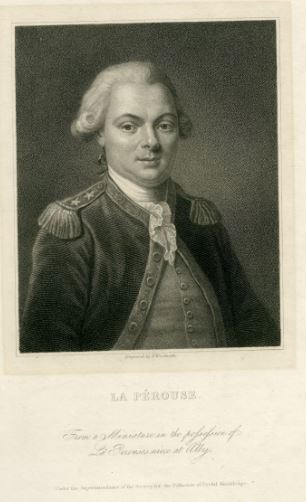 Compare also the widely distributed engraving by Delpech, after an original drawing by A. Maurin, of 1837: 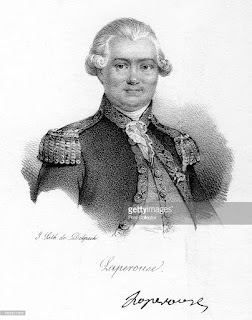 In 2005, remarkably,  a third miniature, probably from the same set,  was located.  In 2013 it was generously donated by its owner, the naval commander André Amet, to the Museum in Albi. 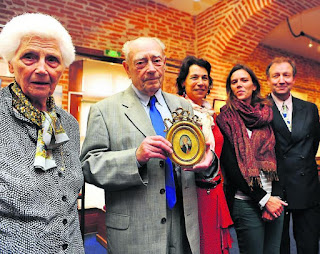 The portrait had originally been in the possession of La Pérouse's wife Eléonore Brodou. It had been inherited by her niece Eugénie, and remained in her family - according to Commander Amet, it passed through six generations from mother to daughter, then from father to son.

The picture is described as 5cm x 3cm in an old golden frame. La Pérouse is depicited in the uniform of a lieutenant de vaisseau, with his cross of Saint-Louis, so the date of 1777-78 is secure.  The miniature was not included in the exhibition of 1888, probably because the descendants of La Pérouse's widow were not approached. (After the loss of the expedition, she had left Albi to return to her own family in Nantes, then moved to Paris, where she died in 1807.) 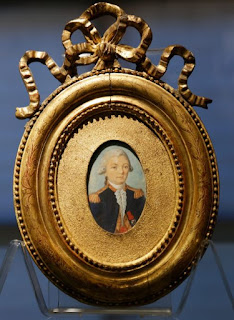 The 1888 catalogue lists a further miniature:  No.59: 4cm x 5cm in a square frame in black, artist unknown, which depicts a later La Pérouse in captain's uniform, also from the  Barthez de Laperouse collection. It is not really clear whether this can be regarded as an original.  It is engraved as the frontispiece to the catalogue. 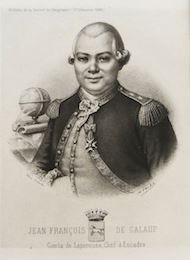 This is really quite a leap from the lithe, debonair young man of 1777!

One thing is for certain, had he lived, the ravages of the expedition would have taken their toll on La Pérouse's appearance.  No doubt his paunch would have diminished, but he wrote ruefully from Sydney, "when I return you will take me for a centenarian, I have no teeth and no hair left". [Letter to Lecoulteux de la Noraye, 7 February 1788].