This beautiful pastel by Ducreux  is traditionally said to represent Louis XVII in the Temple prison shortly before his death in 1795. The picture came on the art market in 2004, when it was sold by Sotheby's in Paris. 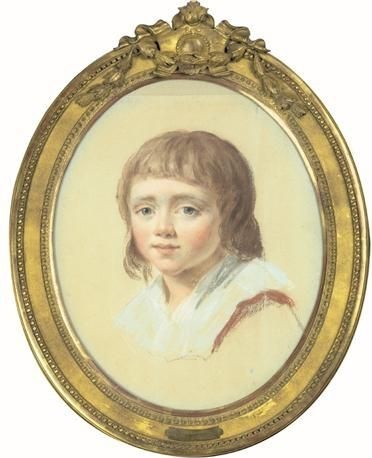 Provenance:
Probably no 21 in the Ducreux sale.
Collection of the duc Descazes (in 1901); sold at auction by his granddaughter, the Comtesse A. de Castéja in 1983, when it was bought by the current vendor.  Exhibited in the Petit Palais in 1901.

Sotheby's did not commit themselves to a date but, if this is indeed Louis-Charles, it clearly cannot date from 1794/5: the child depicted is much younger than nine or ten years old.  Despite Ducreux's famous drawing of Louis XVI before his execution, it is unlikely that the artist had privileged access to the Temple and its inmates; it is more natural to assume that he took the opportunity to sketch the King when he appeared in public during his trial.
See the comments on the Carnavalet website:
http://www.carnavalet.paris.fr/en/collections/louis-xvi-1754-1793

Neil Jeffares' meticulous documentation in the Dictionary of Pastellists, sheds a little more light on the Louis XVII portrait. Three, tentatively four, different versions are listed.  The original descriptions come from the sale of Ducreux's work by his family which took place in 1865.  Lot 20 appears in the sale catalogue as "Louis XVII, dauphin, painted chez Simon" whilst lot 21, probably the current picture, is described as: "Louis XVII, shortly before his death, his face slightly inclined and animated with a smile".  Ducreux's  great-granddaughter, who was responsible for the sale, presumably had access to the available information, but the accuracy of the listing still seems doubtful.

It is interesting to note that the sale included not only Ducreux's own work but pastels by his friend Greuze and by his teacher Quentin de La Tour, as well as a collection of royal memorabilia which Ducreux was reported to have "guarded with religious zeal".

Extract from the Dictionary of Pastellists:

There is no real doubt that the fine, expressive portrait is indeed by Ducreux.  Others of his pastels are comparable in style. See particularly, the study of an unidentified boy, sold by Christie's in March 2019, lot 22 in the 1865 catalogue. 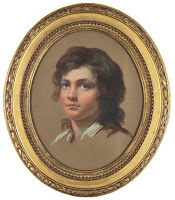 Christie's "Lot Essay" reads as follows:
A pastel portraitist and painter of Marie-Antoinette, Ducreux produced several portraits of children which were left unfinished around the face, adding to the feeling spontaneity which emanates from his work. One of the more significant drawings is without doubt the Portrait of Louis XVIII  pictured as a child showing a hint of a smile, his facial features contrasting with the collar of his shirt and the bust which is barely depicted (private collection; see L.-A. Prat, Le Dessin français au XVIIIe siècle, Paris, 2017, p. 242). A similar portrait by the artist of a young boy drawn on dark brown paper also in an oval format is at the Virginia Museum of Fine Arts in Richmond (inv. 65.38.4; see Jeffares, op. cit., no. J.285.769)..
https://www.christies.com/lotfinder/Lot/joseph-ducreux-nancy-1735-1802-tete-dun-jeune-6193917-details.aspx


How about the date?

Another supposed portrait of Louis XVII which stands comparison with Ducreux's pastel is this one: 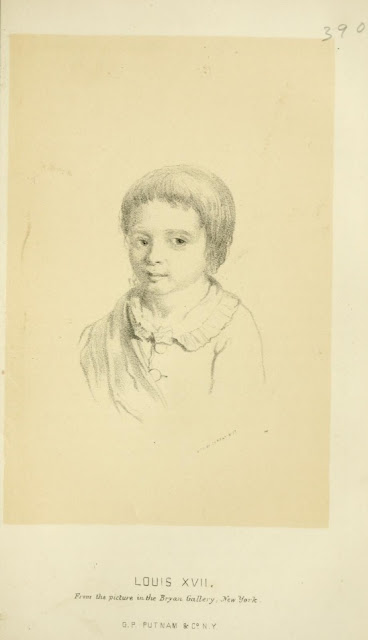 It was illustrated for the first time in The Lost Prince by John H. Hanson, a work written in 1854 in support of the American pretender Eleazar Williams. Hanson had seen the portrait in the Bryan Gallery in New York,  where the owner explained that it had come from the collection of  the French royalist Pierre Claude Prousteau de Montlouis (1761-1851), sold in Paris in 1851.

The reference checks out:  the catalogue of the 1851 Prousteau de Montlouis sale is on Gallica and the picture  may even tentatively be identified as Lot 81, "School of Greuze, portrait of Louis XVII, wearing a blue sash"
https://gallica.bnf.fr/ark:/12148/bpt6k5849602q


Interesting, Hanson immediately jumped to the conclusion that this too represented Louis-Charles in the Temple:
"It was evidently taken during his imprisonment in the Temple, as it bears tokens, in the emanciation of the form, and the pinched and painful expression of the features, of disease and suffering", (p.394-395)
https://archive.org/stream/lostprincefactst00hans?ref=ol#page/390/mode/2up
Xavier de la Roche in 1986, concurred with this assessment, and even identified the picture with the lost portrait by Béllanger (Louis XVII: des documents - des faits- des certitudes, p.504)

We do not have the key to the mystery.  I am not convinced the boy in the picture is actually particularly anguished.  If he is Louis-Charles at all, he not far in age from Brun's depiction of the dauphin with his rabbit. This portrait is certainly remarkably like the Ducreux.

There is one final, rather different, picture to throw into the mix:
This is an oil painting reproduced from Laurentie (1Laur110) said to show "Louis XVII, Simon and his wife" by Boilly.  Lenotre made a lot of this work and based his ideas of the warder Simon's appearance on it.  But, thinking of all those Ducreux memes which have lately appeared,  isn't Simon, with his silly stripey socks, awfully like Ducreux's self-portraits?