A statuette of Voltaire by Houdon 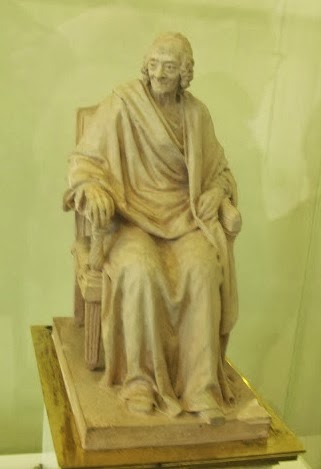 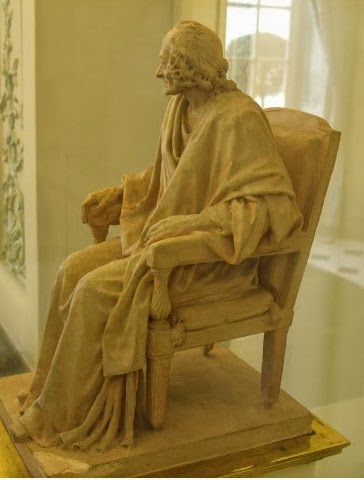 This tiny and very finely conceived statue from Musée Lambinet is one of very few terracotta miniatures of Houdon's seated Voltaire.

Shortly after his return to Paris in February 1778, the eighty-three year old Voltaire agreed to sit for Houdon, having seen his newly completed sculpture of Molière.   Grimm reports that Houdon took but two or three sessions which the philosopher attended cheerfully.  The marquis de Villeveille, who had instigated the sittings, claimed proudly that he had animated the patriarch's features by brandishing Voltaire's recently received "crown of triumph" from the Comédie Française.  The original sculpture, a  bust, now in the Musée des Beaux Arts in Angers, was completed by 16th April 1778 when François Metra noted, "All of Paris goes to the studio of M. Houdon to see a bust of M.Voltaire that is without question the closest likeness of all the portraits one has done of this patriarch."

According to Georges Giacometti, it was immediately following Voltaire's death that Houdon conceived the idea of a full length figure and immediately hurried to Voltaire's deathbed to cast a mould of his hands. Given the harried, clandestine nature of Voltaire's posthumous departure from Paris, this seems unlikely, though such a mould, with Houdon's characteristic red seal and an inscription «H. 31 mai 1778 », certainly exists, again at the Musée des Beaux Arts in Angers  (acquired however only in 1882).

What is certain is that before November 1778 (the date of a letter from Grimm to Catherine the Great of Russia telling her the news), Houdon received a commission from Mme Denis, Voltaire’s niece, for a full-size marble statue intended for the Académie française.  It is this sculpture which, declined by the Académicians, today resides in the foyer of the Comédie française (with or without Voltaire's brain en suite!)

The sculptor showed his composition at the Salon of 1779 in the form of a bronze statuette, which was later sent to the Russian Empress, who was considering a second full-sized statue and is now in the Rijksmuseum in Amsterdam.


A commentator on the Salon wrote: “Here indeed is the old man of Ferney.  Wrapped in his dressing gown, he is seated in his armchair, with his hands resting on the arms;  he has returned from a walk and is tired, ready for bed.  Such is the domestic scene that the author has chosen; yet despite the lassitude of his body, his mind is wide awake, and his sardonic smile reveals the harvest of ridicule that the satirical philosopher has reaped in his latest meditations” (quoted Playing with fire, p.149).

It was Houdon's common practice to produce several copies of his sculptures, often in different media, bronze, terracotta and plaster. No doubt he had many requests for a Voltaire and produced a number of statues which look to be from the same mould as the 1779 Salon piece. According to H.H. Arnason, although these should be regarded as miniatures for cabinets des amateurs rather than "maquettes" or preliminary studies, they are less tight in composition than the full scale statues. Differences include more complex folds of drapery, a wig (or at least longer hair) and Voltaire's disengaged expression, staring into the distance as though lost in thought. His left hand lie loosely on his upper thigh and he sits flatly in his chair with both toes showing. In the finished composition on the other hand, he is fully alert, his hand tense upon his chair arm, his feet positioned as if about to rise.

The most details provenance notes for the Musée Lambinet figure trace ownership back to Napoleon's general the Baron Dejean who died in 1845; it was given by his heir in 1896 to the mayor of Versailles for the town library and subsequently found its way to the Musée Houdon, now Musée Lambinet.

Although Voltaire was the most popular subject Houdon sculpted, the small models in terracotta and plaster are rare. Many are in private hands. According to a recent auction noticethere are, apart from the the Musée Lambinet statue, only two other terracottas known: in the Musée d'Art et Histoire, Geneva - apparently, though there is no reference on their website - and in the private collection of Edmond Courty, Chatillon-sous-Bagneux. It is not clear at what stage this last was recorded, but the Courty collection was sold in 2002.

In addition there are half-a-dozen or so plaster examples, with Houdon's red wax seal, signed and dated 1778 and painted to resemble terracotta.

This statuette probably belonged originally to the statesman and Academician François Antoine de Boissy d'Anglas, whom Houdon knew and sculpted. In 1916 it was put up for sale by a certain
Madame Gaultry first in Bordeaux and then in Paris. Bought by the dealer Jacques Seligmann, it found its way to American where it was owned by the Bliss family from 1920 to 1952, then donated to the Metropolitan Museum. This particular statue is easily traced from its missing chair leg. (See Giacometti, p.196-8.) (35.6cm x 14.6cm  x 20cm)

Arnason lists the Walters Art Gallery statuette as agood quality example. It was acquired by Henry Walters, again from Jacques Seligmann, in 1912. Possibly this is the statue from the collection of Jacques Doucet described by Giacometti as sold to Seligmann in Paris in 1912 (p.186)


This little statue in Nantes is always listed among the examples but, although authentic, it is clearly a little cruder in execution and probably a later copy.  It was acquired by the museum in Nantes in 1866 and is dated by them to the second quarter of the 19th century.


In addition to the above, there is a statuette in the Fitzwilliam Museum, Cambridge, gift of L.C.G. Clarke in 1960 (no picture available but apparently in a glass case!).Two others have been sold at Christie's: from collection of Franklin H. Kissner (1989) and from that of John R Gaines (auctioned in 1993 and again 2013).