English aficionados of French silk are eagerly awaiting the opening of the new European galleries at the V & A scheduled for later on this year.  In the meantime, there are loads of sites on the internet relating to European and US collections.  Since it is much better than anything I could write, I am reproducing here a summary of design trends by silk textile expert Elizabeth St-George, written to accompany an exhibition at Kent State University in 2009. The pictures of the exhibits are no longer available on the website, so I have included a few alternative examples:

"The eighteenth century was of one of the most spectacular periods of silk production in France. Due to regulations initiated to improve the quality of cloth produced during the reign of Louis XIV (1643-1715), silk manufacturing centres such as Lyon were able to capitalize on advancements in weaving technology to create luxurious textiles that were vital to the French economy."

"Early eighteenth century silk design is marked by the evolution of textile motifs towards greater naturalism. While floral ornamentation had consistently appeared in Medieval and Renaissance silk decoration, these forms were heavily stylized. Semi-naturalistic flowers begin to appear about 1700, after which a tendency towards more naturalistic forms accelerated until the middle of the century. The beginning of the eighteenth century is also noted for the production of "Bizarre silk named for the asymmetrical arrangement of exotic motifs and odd color combinations. The resulting informality of "Bizarre Silk" patterns greatly complemented the  increasing naturalism in design."


During the 1730s, an entirely new style developed marking a dramatic shift in French silk design. Silks of the 1730s are characterized by large and completely naturalistic fruits and flowers often depicted in relief.

This new style can be linked to the beginning of the career of Jean Revel (1684-1751) one of the most renowned and technically sophisticated Lyonnais silk designers. Revel and other contemporary silk designers also focused considerable attention on how textile motifs were rendered in thread. Instead of depicting flat, single coloured motifs, designers of the 1730s conceived motifs more three-dimensional in appearance through shading or gently blending contrasting shades of colour. 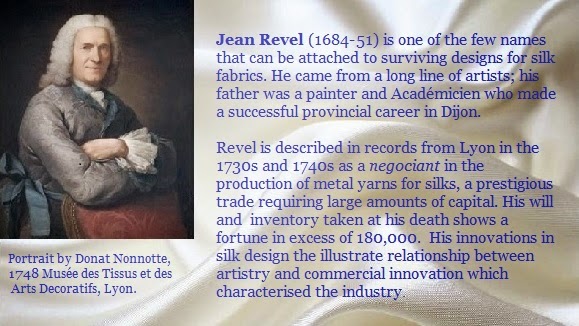 "Having developed naturalism to its fullest extent in the 1730s, silk designs of the 1740s and early 1750s returned to a more stylized manner of depicting forms, a trend that continued through the end of the century. The scale of fruits and flowers also diminished and silk designers played with a lighter composition by organizing meanders of flowers, ribbon, lace or fur patterns across the fabric. While meanders of the 1740s tend to flow more freely through the space of the fabric, meanders of the early 1750s are more static in nature. The light hearted charm and vigour that develops in silk designs during the 1740s is characteristic of mid-eighteenth century Rococo silk production".

"Although the designs are not as stiff as their predecessors, silks of the late 1750s and the 1760s are designed with a similar formula of meanders and smaller, stylized motifs. Meanders of this period are commonly arranged parallel to one another creating an asymmetry across the vertical axis of the fabric. This contrasts greatly with the rigid vertical symmetry employed in silk designs of the 1740s and early 1750s".

"The 1750s also marks the beginning of the career of Phillip Lasalle (1723-1804), another extremely successful Lyonnais silk designer who is credited with being the first to utilize the fur patterns that were extremely popular in the late 1750s and 1760s". 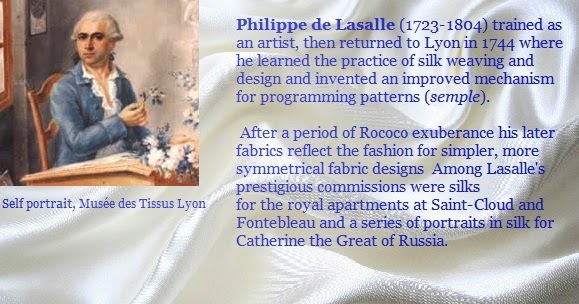 "Owing significantly to the rediscovery of Pompeii and Herculaneum in 1748, neo-classical themes became increasing influential in textile design at the end of the eighteenth century. While rsmall, stylized flowers emained, the meanders that were popular in earlier decades weregradually replaced by straight lines beginning in the 1760s. During the late 1760s meanders scattered with floral motif curled above or between rows of stripes. By the middle of the 1770s, the floral motifs that were once contained within meanders were now dispersed across or within stripes creating a stiffer composition  that contrasts greatly with the airy designs that were popular earlier in the century".


Other references
Article on the new gallery at the V & A, The Guardian 15th January 2014.

."The silk industry of Lyon" in A textile lover's diary [reference website]
http://belovedlinens.net/fabrics/Lyon-silk1.html

Philadelphia Museum of Art: "The Bizarre and the beautiful: silks of the eighteenth century" Exhibition July 1, 2006 - November 11, 2007, Curator Dilys Blum


Lesley Ellis Miller "A portrait of the 'Raphael of silk design'"  V&A Online Journal, Issue No. 4  (2012). [on Jean Revel]
http://www.vam.ac.uk/content/journals/research-journal/issue-no.-4-summer-2012/a-portrait-of-the-raphael-of-silk-design