The Lavoisiers: new perspectives on a famous portrait

Thank you to Rudy Wolff, of the "France in the 1700s" Facebook group, for drawing my attention to this news from the Met. 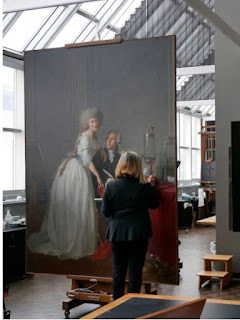 In 2019 the conservators' curiosity was peaked when David's famous portrait of  Antoine Lavoisier and his wife, Marie-Anne Paulze, in the Metropolitan Museum was sent to have some discoloured varnish removed, and red paint was glimpsed through the surface cracks.  Since then the painting has undergone a thoroughgoing investigation,  involving the latest scientific imaging techniques such as "infrared reflectography (IRR)" and "macro x-ray fluorescence (MA-XRF) mapping".
The results, just published, are to say the least, unsettling. It appears that the painting underwent quite a metamorphosis before it reached its final form.  The red tablecloth, and glinting scientific instruments were largely absent from the original composition and, still more disconcerningly, Madame Lavoisier once sported a large red-ribboned hat! The researchers go so far as to suggest that David did not originally intend to portray the Lavoisiers  as scientific pioneers at all but as society figures, the  representatives of an  affluent and fashionable bourgeoisie.
Here is a little more detail on the findings:
1. General composition:  Infrared reflectography revealed carbon-based underdrawing in pencil and black paint, as well as changes to the painted design which appear a shadows.  David seems to have worked directly onto the canvas rather than use preparatory drawings.  The location and positions of the figures were established at early stage and not substantially altered. 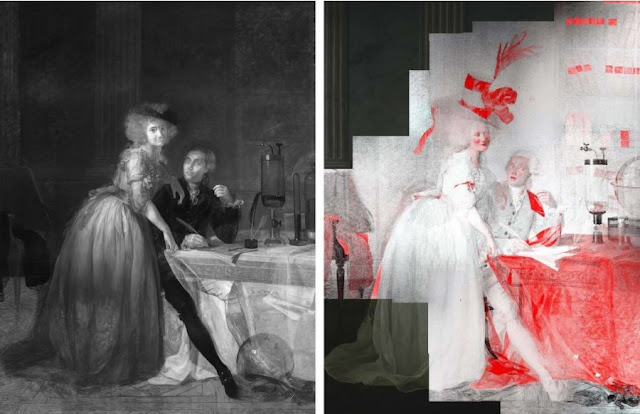 2. The setting: In contrast, there were a number of changes in the surroundings and furnishings.  The infrared images reveal that there was originally no red velvet desk cover;  instead Lavoisier was seated at a neoclassical writing desk with an ornate ormolu frieze. His left leg, now hidden by the cover, was clearly visible. In addition to the inkwell, quills and paper seen today, three large sheets of paper unfurled over the front edge of the desk to the right. Beneath the desk was a wicker wastepaper basket.
X-ray florescence mapping revealed other alterations.  To the far right of the desk is the outline of a globe with a red supporting mount. The assemblage of three scientific instruments and green leather document box, painted on the red cover, together with the two instruments on the floor, are later additions.  Originally David  depicted a much larger piece of apparatus with what appears to be a globular glass container.  Details of the furnishings, notably a large bookcase, were also painted out. 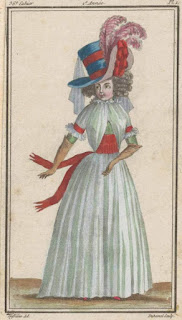 3. Costumes: By far the biggest surprise of the investigation was  the revelation that Madame Lavoisier originally sported an enormous fancy hat.  The infrared image shows only a black splodge over her head. But X-ray florescence mapping clearly reveals the hat in all its splendour,  adorned with red ribbons, bows and a spring of flowers. The belt and ribbons on the dress, now a muted blue, were also originally red. Lavoisier too had different costume, brown with a longer coat, and also a red mantle draped across his shoulders.
David Pullins, Associate Curator, and Jessica Regan of the Met's Costume Institute collection, managed to track down a number of fashion plates which show hats very similar to the one worn by Madame Lavoisier. The style, known as the chapeau à la Tarare after the operas of Beaumarchais, was fashionable in the summer and autumn of 1787, which corresponds to the date of the picture. Illustrations show the hat teamed with chemise à la reine with co-ordinated red belts and ribbons, again as in David's original composition.
INTERPRETATIONS
The researchers conclude that the alterations in composition, reveal an evolution not merely in artistic choice, but in underlying meaning. David is held to have originally presented the Lavoisiers primarily as a wealthy society couple rather than serious scientists:

The results revealed that the first version depicted not the progressive, scientific-minded couple that we see today, but their other identity, that of wealthy tax collectors and fashionable luxury consumers. S.A. Centeno, D. Mahon, F. Carò, F. et al. , Heritage Science, 2021 Article abstract)

Rather than showcasing the couple as progressive scientists, David initially emphasized the couple’s privileged role as rich tax collectors and fashionable consumers of luxury—a status that funded their research but ultimately led Lavoisier to the guillotine in 1794. Metropolitan Museum [Instagram post]

Despite the undoubted interest of the new discoveries, I am not sure so sweeping a re-evaluation of the nature of the portrait is really justified.

Let us reconsider the evidence:

The  social position / self-image  of the Lavoisiers

To reduce Lavoisier's multivariate social and intellectual identity to the persona of wealthy tax-collector and ostentatious consumer is at best simplistic, at worst a clumsy piece of retrospective analysis.  Histories of science celebrate him above all for his description of oxygen and his analysis of its part in combustion. In the 1780s he enjoyed a positive image as a respected scientist, economist, and Academician, a political progressive and supporter of the Physiocrats.  Although he was to be  guillotined because of his association with the hated Tax-Farm, he was a supporter of the ideals of the Revolution.

David was a sophisticated commentator, whose discrimination did not suddenly desert him when faced with a modern subject.  According to Mary Vital (1995) he conceived the Lavoisiers as a model of constructive social behaviour.  He himself was a member of  the same progressive milieu and knew the couple personally.  In the Autumn 1785 Lavoisier's personal notebook on the Paris Salon contains extensive favourable  comments on David's Oath of the Horatii in a notebook on the Paris Salon.  In March 1786  David gave drawing lessons to  Madame Lavoisier.  During 1786 the artist became friendly with the Trudaine brothers, sons of the Intendant Jean-Charles-Philibert Trudaine de Montigny, a colleague of Lavoisier in the Academy of Sciences.  (Trudaine had witnessed the Lavoisiers' marriage contract in 1771 and in 1774 Lavoisier dedicated his Opuscules physiques and chimiques to him) The poet André Chénier, whom David also knew at this time, shared an enthusiasm with the Trudaines for amateur science.  The artist and his sitters were therefore bound by shared friendships and outlook.  See Vital, p.558-9.

The painting, which is monumental in size, was commissioned from David for the considerable sum of £7,000 in 1788. It seems quite likely, given the prominence of Madame Lavoisier in the composition, that she was the prime mover. Marie-Anne Paulze Lavoisier  was a serious and active collaborator in her husband's scientific work, who acted as his recorder and illustrator, and learned English and Latin in order to translate scientific literature.

All Lavoisier's biographers, beginning with Grimaux in 1888, stated that Marie-Anne received drawing lessons from David. In the 1990s this was confirmed by the discover of two drawings belonging to the family, of a plaster cast and a nude male torso, inscribed with comments by David, who praises the work. The provenance and date (March 1786) suggest they are indeed by Madame Lavoisier.  Her portrait of Franklin shows that she did indeed have considerable ability. (Vital (1995), p. 612-3)

In addition to the numerous technical illustration in Lavoisier's publications, sepia drawings by Marie-Anne Paulze survive which show experiments in her husband's laboratory.   The pictures were perhaps intended for engravings, or as further illustrations for a scientific work. She depicts herself in the scene prominently, seated to one side observing and recording the proceedings.  In these images she wears a style of dress very similar to the one depicted in the painting.

The immediate occasion for the portrait was the completion by Lavoisier of his Traité élémentaire de chimie published in February 1789 - a rapid success throughout Europe. Discovery of oxygen and determing chemical composition of water. Marie Anne drew and engraved thirteen illustrations for this work, proudly signed "Paulze Lavoisier Sculpsit."

In a letter of February 1788 Jean Henri Hassenfratz, director of the Arsenal Laboratory, refers to Madame Lavoisier's wish to commemorate her husband's scientific achievement with a painting. He suggests allegorical subjects - combat of oxygen against phlogiston, or the genius of new chemistry triumphant over the phlogiston hypothesis. Evidently, the double portrait, by an esteemed associate and mentor, was preferred.(Cited Vital, p. 617)

David, then, surely set out from the onset to celebrate enlightened scientific couple at their moment of public acclaim. He refined and focus his theme, but there is no real justification for the idea that he changed his attitude towards his subjects in the course of painting. It should be emphasised that, even in the finished work, the Lavoisiers are not actually engaged in scientific research in a laboratory, but in the study putting the final touches on a written publication - presumably the celebrated Traité. Marie Anne Lavoisier occupies the foreground, ready to support and encourage. Lavoisier turns away from the proofs of his book to give her a uxorious smile; her portfolio of illustrations is visible on the chair to one side. The scientific instruments serve primarily to define the context. David's alterations sharpen the meaning of the scene: extraneous objects - which perhaps featured in the real room - globe, wicker basket, bookcase - are removed. New, more illustrative objects are against the unified background of the red tablecloth. The large piece of apparatus is replaced by a more accurate and artistically striking set of brass and glass instruments.

The painting may readily be compared to David's 1783 portrait of the physician and obstetrician Alphonse Leroy, now in the Musée Fabre in Montpellier, The doctor is seated at his desk, informally dressed and seemingly approachable but radiating deeply serious intent.

Many years later Madame Lavoisier remembered nostalgically a mixture of scientific work and informal conviviality among an intimate group of like-minded people.

These were, Lavoisier used to say, his days of happiness: a few enlightened friends, a few young people proud to be granted the honour of cooperating in his experiments, gathered in the morning, in the laboratory;  it was there that we took lunch, we discussed, we worked, there that was born the beautiful theory which immortalised its author.

A suppression of luxury?

There is nothing to suggest that David was troubled by the depiction of wealth as such. It is known that he was advised to withhold the picture from the Salon of 1789 because of Lavoisier's status as a hated tax farmer. However, the version of the painting concerned was presumably the one we see now. The concealment of the ormulu desk, the most obvious luxury object, was surely an artistic choice. Apart from anything else the addition of the red velvet tablecloth disguises the awkward positioning of Lavoisier's legs. Its introduction no doubt also encouraged David to reconsider his use of reds in other parts of the composition, notably the costumes.

What about that hat?? We do not know exactly why it was painted out. Perhaps the decision was primarily aesthetic. Or perhaps it was judged too extravagant / too transient a fashion / too frivolous / an unlikely choice for indoor wear? However, we should guard against equating greater simplicity of style with lack of luxury and conspicuous consumption. The ostensibly simple cotton chemise à la reine for example, was deceptively complex and expensive to produce. See too the article by Dana Notine in the Fashion Timeline on Lavoisier's fashionable attire. Understated and relaxed garments, often in sumptuous fabrics, were the sophisticated choice of the wealthy elite at the end of the Ancien Régime, who valued the informal and domestic - for whom, indeed, science was the convivial pursuit of "a few enlightened friends".