The Encyclopédie on tobacco

The account of tobacco manufacture in the Encyclopédie, is based on practice at the tobacco works in Paris, which was adjacent to  the Hôtel de Longueville.  The article was published under the name of the Chevalier de Jaucourt, but was no doubt based on copy supplied an official of the Ferme de tabac.

Jaucourt's informant notes that the manufacture of tobacco products demanded neither complicated machinery nor highly skilled workers; however simple operations require care and attention throughout the process, from the choice of materials to the finished product.

The magasins or warehouses for storage of raw tobacco were designed to offer protection from sunlight and humidity.  They were very large, since newer leaves had to be constantly moved and piled up to avoid uncontrolled fermentation.

Tobacco was processed into a number of different finished products, each with a particular name and usage. The two most common in Paris were rolls for the pipe and  tabacs "en carotte", that is compressed tobacco for grating.   The article illustrates the steps in manufacture:

The tobacco is transported to the manufacture in wooden barrels called "bocaux".  It arrives as bundles  ("manoques"), ie. handfuls of leaves bound together and tied using a corded leaf at the top.  These have to be separated out and the leaves rubbed clean and graded.  "Époulardage" is jargon de l'atelier for shaking off the dust -  the bundles resembled chickens with flapping wings (see the clip below, from Morlaix in 1986).
Read more »
No comments:

This post is based on a lecture given in 2011 by Paul Smith, a specialist in industrial archaeology with the Direction générale des patrimoines (see references blow).

Paul Smith explains how the organisation of the tobacco trade into a royal monopoly dictated the structure of the tobacco processing industry and its associated buildings:
Unusually for this period, the workforce employed by the Tobacco Farm was concentrated in large-scale factories, an organisational preference dictated both by operational convenience and by the need for tight security. The state tobacco monopoly of the 19th century was also to be characterised by large factories, whereas small scale operations were the rule for the period of deregulation during the Revolution.
The manufactures, which were built and maintained directly by the Crown, functioned as symbols of royal authority.  Situated in major ports or urban centres, they represented prestigious architectural projects. Their innovative design anticipated the model factories of Eugène Rolland in the nineteenth century.
Paul Smith begins his discussion  with this view of the interior of one of the earliest of the factories, the manufacture du tabac in Le Havre.  The illustration is is a small vignette from an engraving of 1728 in the Bibliothèque Nationale.  At the tables to the right tobacco leaves are being "spun" or twisted into ropes or "rôlles" -  the basic form in which tobacco was sold in the Ancien Régime.
Already, at this early date, the enduring characteristics of the tobacco industry are apparent - firstly, the large scale concentration of workers and, secondly, the use of child labour: children can be seen under the tables passing up the leaves of tobacco to the ouvriers fileurs.
Read more »
1 comment:

The Ferme du tabac and the organisation of the Tobacco industry

By the  mid century tobacco duties were worth more than 30 million livres a year to the French Crown - some 7% of fixed income -  second in value only to the hated gabelle.  Like the trade in salt, the tobacco trade was administered as a royal monopoly. In 1730, after a period of control by the Compagnie des Indes, Ferme du tabac was incorporated into the "General-Farm".   It was a huge undertaking. To maintain the tobacco monopoly effectively, every aspect of the importation, processing and sale of tobacco had to be overseen. 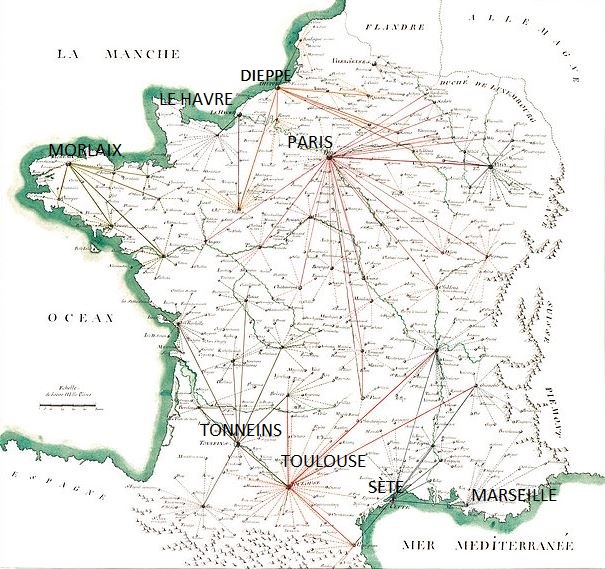 This map, which was prepared by Lavoisier in the 1780s,  shows the Tobacco Farm's complex and highly regulated pattern of import and distribution. This level of control was made possible by the centralised organisation of the General-Farm with its specialised committees, directors and inspectors. From 1749 onwards the  Comité du tabac occupied the magnificent 17th-century Hôtel de Longueville, situated in the centre of  Paris between the Louvre and the Tuileries.  From here the authority of the Farm extended directly through much of the Kingdom, with "sous-fermes" in the Lyonnais, Dauphiné, Provence, Languedoc, Roussillon and Lorraine.