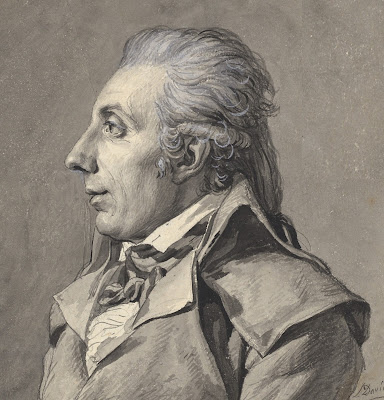 Here are a few biographical notes concerning one of the lesser known of David's prison companions, the deputy Jean-Baptiste Gabriel-Louis Thyrus de Pautrizel (1754-1836) who came from Guadeloupe.  It feels a bit random to write about one Revolutionary among so many, but David's portrait brings this man suddenly closer.  Like most of the radicals, his record proves deeply ambivalent.

What follows is mostly taken from a well-researched article by Pierre Bardin posted on the website Généalogie et Histoire de la Caraïbe.  The colonial background adds an extra dimension to Pautrizel's story.

Here, collected from different websites, are images of David's medallion portraits depicting the former Montagnard deputies who were imprisoned with him in the Collège des Quatre-Nations after the insurrection of Prairial  (28th May 1795.)
According to Louis-Antoine Prat there are now nine known portraits, five in public galleries, four in private collections.  Clearly they are intended as part of a series: they are uniform in format: circular, of similar size (c.18-19 cm) and executed in  pen and ink with wash.
At one level these are very immediate works.   In his first period of imprisonment David had felt himself isolated but this time he was thrown together with his companions. At Quatre-Nations the deputies were segregated from other prisoner and detained in makeshift cells around the third, innermost courtyard of the building. They shared a kitchen, and were allowed to gather and talk in the courtyard, also to receive visitors. Much of their time was spent in writing personal defences for publication. The inscription on the portrait of Jeanbon Saint-André notes that it was "a gift of friendship", drawn "in chains", implying that  David sketched it there and then in prison .The Jeanbon Saint-André, the Bernard de Saintes, and the "Zurich" portrait have exact dates, 8th 24th and 16th July respectively (David was released on 3rd August).   Other portraits have have a background of bricks which suggest a prison wall.
Read more »
No comments:

? David, Portrait of an unknown man, presumed to be his gaoler, c.1794
1794 Oil on canvas.
55.5cm x 46cm
This striking portrait attributed to David is to be found in the Musée des Beaux-Arts in Rouen.
A modern label on the back states that it was painted by David in prison and that the subject was "his gaoler". According to this note, the picture was the possession of  the gaoler's son, a retired military officer living in Compiègne, who gave it as a token to gratitude to his doctor, a certain Josset (sometime given as Gosset).  The  museum acquired the painting  in 1931 when it was sold by one of the doctor's descendants.
Read more »
No comments:

I am posting this portrait of David by Langlois for no better reason than that it is the last image from life of one of the world's great artists -  but also simply because it is such a beautiful painting.   I have known old people whose skin becomes perfect and fragile-looking in just this way; and whose shrunken bodies seem too small for their enveloping clothes as does David's in his favourite frockcoat.
Read more »
No comments:

This portrait in the Pushkin Museum in Moscow represents one of the earliest images of David.  It has been reproduced on the internet for quite a while, but was only uploaded to Wikimedia in this bright high-quality version in 2014.  I love the wig and the dusty coat with its dishevelled collar. It seems that, even by 1790, the Revolution had not yet blown away conventional habits of dress in the artist's studio.
Read more »
No comments: