Here, collected from different websites, are images of David's medallion portraits depicting the former Montagnard deputies who were imprisoned with him in the Collège des Quatre-Nations after the insurrection of Prairial  (28th May 1795.)
According to Louis-Antoine Prat there are now nine known portraits, five in public galleries, four in private collections.  Clearly they are intended as part of a series: they are uniform in format: circular, of similar size (c.18-19 cm) and executed in  pen and ink with wash.
At one level these are very immediate works.   In his first period of imprisonment David had felt himself isolated but this time he was thrown together with his companions. At Quatre-Nations the deputies were segregated from other prisoner and detained in makeshift cells around the third, innermost courtyard of the building. They shared a kitchen, and were allowed to gather and talk in the courtyard, also to receive visitors. Much of their time was spent in writing personal defences for publication. The inscription on the portrait of Jeanbon Saint-André notes that it was "a gift of friendship", drawn "in chains", implying that  David sketched it there and then in prison .The Jeanbon Saint-André, the Bernard de Saintes, and the "Zurich" portrait have exact dates, 8th 24th and 16th July respectively (David was released on 3rd August).   Other portraits have have a background of bricks which suggest a prison wall.
The series was also self-consciously commemorative.  The format recalls the sets of prints of deputies produced around 1790 notably by Dejabin and Levachez (see Amy Freud, 2008). .In some examples the outline of the figure has been thickened as though David intended to have the image engraved.
In her book Necklines, Ewa Lajer-Bucharth, Professor of Fine Art at Harvard, analyses the portraits as David's attempt to express the bonds of friendship and provide the disgraced Jacobins with an identity. Some of these men, like Barbeau du Barran or Bernard de Saintes, had shown great ferocity during the Terror, but they now experienced imprisonment and failure themselves. The beleaguered deputies saw themselves as the "last Romans" living out stoic ideals of virtue ( Romme, Goujot and their companions, the famous "Martyrs of Prairial"  had already chosen  heroic suicide rather than submit to execution. ) In their defences they asked not just  to be released but to be cleared of charges. To be held without formal indictment was a particular affront; thus Bernard de Saintes  on 30 July 1795, demanded "to be promptly brought to justice, and by it, to death or honour".  At the same time the stress of their situation exacted a physical and psychological toll; David, Bernard, Jeanbon and Lindet all petitioned to be discharged on grounds of ill health - David in his delirium is said to have hallucinated a guillotine in the prison yard. According to Ewa Lajer-Bucharth, this tension is reflected in the  uncompromising realism of the portraits and the awkwardness of the poses: the sitters seem overwhelmed by their hats or by the sheer weight of their clothing.
Here are the portraits I have managed to find:
Jeanbon Saint-André, Art Institute of Chicago 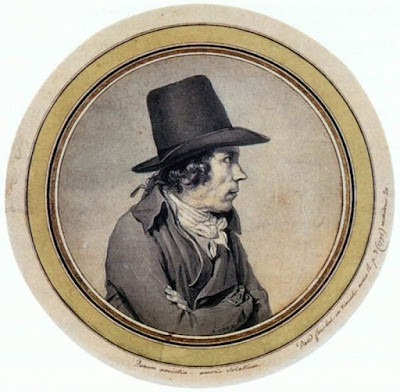 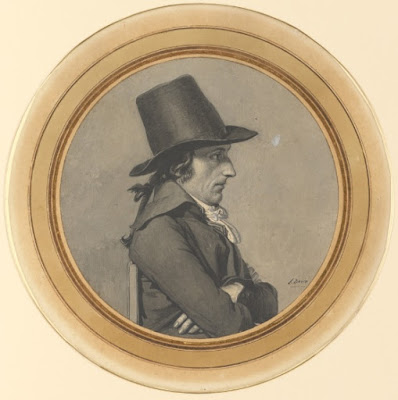 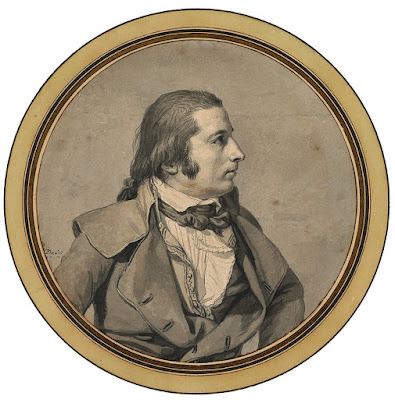 Portrait "assumed to be" Jean-Baptiste-Robert Lindet, 1795.
Pen and ink with wash and gouache.  19 cm diameter.
National Gallery of Canada, Ottawa, Canada
https://www.gallery.ca/collection/artwork/portrait-assumed-to-be-of-jean-baptiste-robert-lindet
The identification of the sitter as Lindet is not absolutely agreed.  Ewa Lajer-Bucharth suggested this could be Elie Lacoste, Grégoire-Marie Jagot or Jean-Henri Voulland, all of whom were also arrested at the same time as David and feature in ms biographical notes compiled by Jules David..

What did Lindet look like?
He was described as a small man, with light brown hair, blue eyes, thin face and big nose.  The majority of likenesses are based on a lithograph of 1820 from the studio of Delpech. See: Amand Montier, Robert Lindet (1899), p.xii-xiii . Montier also mentions a small engraving in a 19th-century series which shows a younger Lindet with a ponytail and an "aimiable smile".
Very recently a portrait by the artist Henri Nicol Van Korp (1756-1819) has  been offered for sale by Proantic.
I think the comparison is pretty conclusive -  this is our man!
"Zurich medallion" - unidentified subject, whereabouts unknown 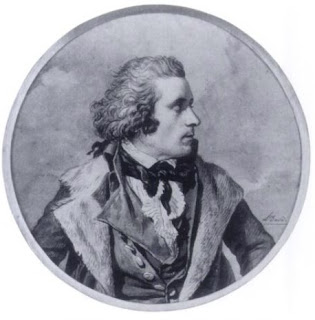 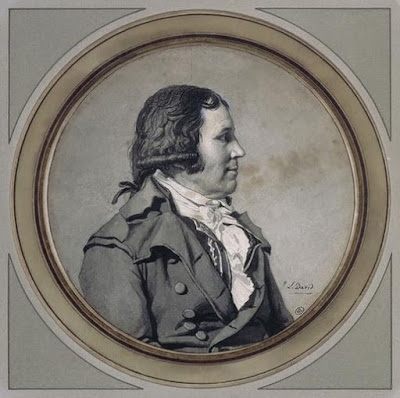 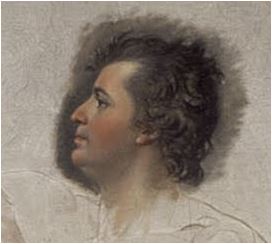 This portrait, which was bought by the Louvre in 1914, has traditionally been taken to depict the deputy Dubois-Crancé.  This is now considered a mistake since, far from being imprisoned with David, Dubois-Crancé had withdrawn from the Jacobins in 1794 and was a member of the commission responsible for the post-Prairial reprisals. The true sitter unknown;  Ewa Lajer-Bucharth favours Robert Lindet  - but the Ottawa medallion is surely a better match for Lindet, with his big nose.  Antoine Prat, in his notice on the Louvre website, remarks only that the embroidered waistcoat gives the subject a military air.
To add to the mystery,  this man does indeed look very similar to Dubois-Crancé as he is depicted in David's oil sketch for the Serment du Jeu de Paume. Maybe the nose isn't quite identical, but both men have the same thick neck with loose skin under the chin (?)
Here is the relevant note from Ewa Lajer-Bucharth's Necklines:

This drawing was uploaded to the Athenaeum website in 2014.  There are no further details, but it looks awfully like the same man:
Barbeau du Barran, private collection 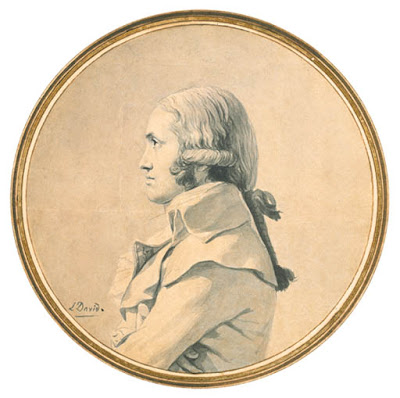 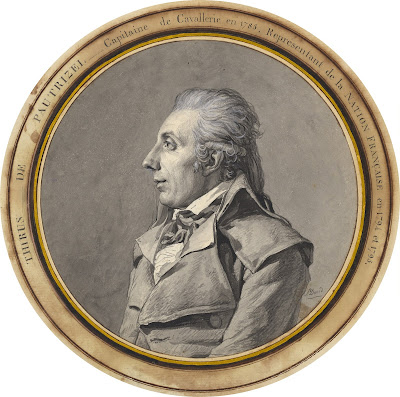 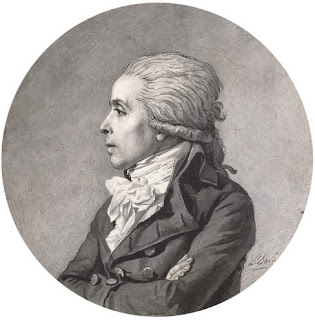 Portrait of an unknown man, sold by Christies in February 2009.
Pen and ink, with black wash, white highlights.  Diameter 17.8 cm.
https://www.christies.com/lotfinder/Lot/jacques-louis-david-paris-1748-1825-bruxelles-portrait-5157395-details.aspx#
Here again is the medallion which the Goncourt Brothers erroneously regarded as a self-portrait. Ewa Lajer-Bucharth, writing before the picture was sold by Christie's in 2009, identified it as one of the present series.  This is also suggested by the auction notes which state (a little sloppily) that it is "perhaps one of David's companions in the Luxembourg".
We know from the auction catalogue that the portrait has the name "Saint-Esteve" written on it.  I've now managed to track down a likely candidate - Jacques Constant-Saint-Estève (1757-1833), deputy  for  Aveyron in the Legislative Assembly.  Constant-Saint-Estève did not serve in the Convention but he reappears as a local official in Aveyron during the Empire (sous-préfet of  Saint-Affrique between 1800 and 1815).  We might guess David painted his portrait during the Legislative - that would certainly fit better with the powdered wig and confident air of the sitter.  If so, this medallion is hors série.
References
Ewa Lajer-Bucharth, "The aesthetics of male crisis: the Terror in the republican imagery and in Jacques-Louis David's work from prison" in Femininity and Masculinity in Eighteenth-century Art and Culture, ed.Gillian Perry, Michael Rossington,  1994.
https://books.google.co.uk/books?id=HciUKoMSzjoC&pg=PA219#v=onepage&q&f=false
_____, Necklines: the art of Jacques-Louis David after the Terror (Yale UP 1999), p.88-118.
https://books.google.co.uk/books?id=PfS0boVIzX0C&pg=PA88#v=onepage&q&f=false
Louis-Antoine Prat,  "Portrait d’homme, dit de Dubois-Crancé" [Notice on the Louvre website]
https://www.louvre.fr/oeuvre-notices/portrait-d-homme-dit-de-dubois-crance
Christie's, Lot essay for the portrait of Barbeau du Barran,
https://www.christies.com/lotfinder/Lot/jacques-louis-david-1748-1825-portrait-of-joseph-nicolas-1428753-details.aspx
On the earlier Levachez  series of deputies:
Amy Freund,“The Legislative body: print portraits of the National Assembly, 1789-1791.” Eighteenth-Century Studies, vol. 41, no. 3, 2008, pp. 337–358.  [Available on Researchgate]