This portrait in the Pushkin Museum in Moscow represents one of the earliest images of David.  It has been reproduced on the internet for quite a while, but was only uploaded to Wikimedia in this bright high-quality version in 2014.  I love the wig and the dusty coat with its dishevelled collar. It seems that, even by 1790, the Revolution had not yet blown away conventional habits of dress in the artist's studio.
At one time the work was thought to be a self-portrait, but Jacques Wilhelm long ago pointed out a note on the back crediting it to Antoine Gros. This attribution is now generally accepted.  David expected his students to pose for him and for each other.  Delécluze reports that the painting of informal portrait heads replaced the têtes d'expression which had been part of academic instruction in Paris. (Louis David (1855), p.53).
It is probable that Gros's picture was one of a set of portraits of great figures of France, commissioned from David's studio by the King of Poland in 1790.   (We have a letter from Marmontel, dated January 1790,  assenting to David's request to borrow portraits from the Academy to copy for the task.)  Among the painters, there were to be just two Moderns,  Élisabeth Vigée Lebrun and David himself.  Gros seems to have copied an earlier study by Isabey dated 1789, now in the Louvre.  The pose must have enjoyed the master's approval.
Jayne Wrightsman, The Wrightsman pictures (2005) p.268-271.  "Baron Gros",   https://books.google.co.uk/books?id=Gh_4yssGQgcC&pg=PA271#v=onepage&q&f=false
Au-delà du maître: Girodet et l'atelier de David  Exhibition at the Musée Girodet in Montargis (2205)  cat 22:  David by Isabey, p.49
https://books.google.co.uk/books?id=MejpAAAAMAAJ [snippet view only]
Other early portraits
This fine study by Jean-Baptiste Wicar, donated to the Louvre in 1997, belongs to the same genre of informal studio portraits.  An annotation gives the date of 1788, and specifies that it was drawn by Wicar in Florence "after Girodet". Girodet's original, sadly, is lost. 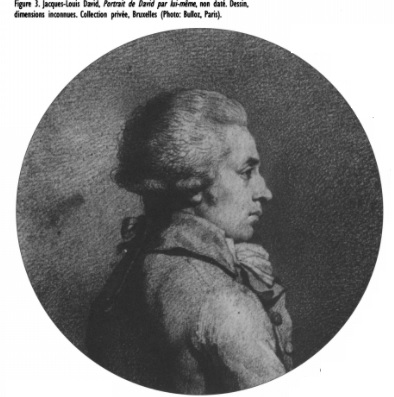 A very similar portrait, in a Belgian private collection,  was published as a self portrait by René Verbracken  in his authoritative Jacques-Louis David jugé par ses contemporains (above, reproduced by Bédard (1994) p.111).  It is not clear why this should be considered a self-portrait rather than the missing Girodet.  The picture differs only slightly from Wicar's but  David's likeness seems more clearly captured: note particularly, the bump in the nose and the characteristic dark, circumflex-shaped eyebrows.
For a discussion see:
Sylvain Bédard. (1994). "Un portrait de David par Nicolas-Bernard Lépicié? Canadian Art Review, 21(1/2), 111-118. [on Jstor]
This is the accompanying note: 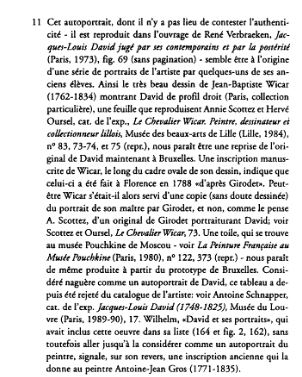 Some misidentified "Davids"
David by Lépicié?
Non! Bédard's article argues that this  painting by Nicolas-Bernard Lépicié (1735-84) in the musée Bonnat in Bayonne could be an unrecognised portrait of David.
The two artists both occupied studios in the Louvre in 1782 to 1784 and probably knew one another. Lépicié's sitter shares David's broad brow, circumflex-shaped eyebrows and a slight bulge of the nose.....
But what about his thinning hair and dark eyes?  No way is this David.
Self-portrait? 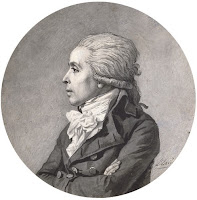 Non! This beautiful ink and wash drawing by David was sold by Christie's in 2009.  It once belonged to the Goncourt brothers who considered it to be a  self-portrait.  Anita Brookner in her biography of 1980 reproduced it as such, identifying it as a companion piece to the portrait of Suzanne Sedaine painted in 1783.  An annotation gives the subject as a certain "Saint-Esteve",  who is now said to be "perhaps one of David's companions in the Luxembourg".   At the auction the picture was snapped up by the well-known collector Georges Pébereau, for a whopping 577,000 euro.
Christie's auction ( Bergé-Yves Saint Laurent sale)
https://www.christies.com/lotfinder/Lot/jacques-louis-david-paris-1748-1825-bruxelles-portrait-5157395-details.aspx#
Georges Pébereau's acquisition, Figaro, article of 26.11.2009:
https://www.lefigaro.fr/culture/2009/11/26/03004-20091126ARTFIG00525-le-cabinet-secret-de-georges-pebereau-au-louvre-.php
Here is a summary of the evidence against the picture being a self-portrait, from Ewa Lajer-Bucharth, Necklines, p.321, nt.47: