A meeting with Robespierre - recollections of Paul Barras

In Spring 1794  Paul Barras and Stanislas Fréron returned from their victorious Mission in Toulon to face the opprobrium of the Committee of Public Safety.  Many years later Barras recalled a unannounced visit that he and Fréron made at this time to Robespierre in the protective sanctuary of the Duplays.  They met a strangely unresponsive Robespierre who, in these final months, evinced, as Peter McPhee has it, "the physical toll taken by his mental distraction" (McPhee, p.194)
Read more »
No comments:


In 1793 a sympathetic Robespierre  helped the Norwegian merchant seaman,  Nicolay Linde (1755-1821)  to regain his ship which had been impounded by the Revolutionary authorities.  The circumstances of the Norwegian's encounter with Robespierre were recounted by his son, who died in 1879, and published in the journal Morganbladet in 1928 (translated for the Annales historiques de la Révolution française in the same year.)
Read more »
No comments: 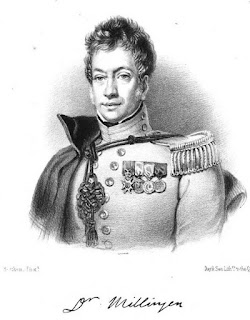 The Recollections of  the army surgeon and author John Gideon Millingen (1782–1862) first published in 1848 contain a rare and fascinating personal account of an interview with Robespierre at the height of the Terror.  Millingen, himself outlines the circumstances of their meeting. Millingen's father Michael Van Millingen, who was Dutch in origin, had moved to Paris at the beginning of 1790 and taken lodgings in the Hôtel de France, rue Vivienne (p.25).  The family was favourably  disposed towards the Revolution but came under suspicion when the war with England began; the elder son James, who was a clerk in the Mint, was arrested and detained first in the Luxembourg, then in the Collège des Écossais which served as a prison during the Terror.  The parents, ordered to leave Paris, moved to St-Léger.  Vouched for by the Albitte brothers, Montagnard deputies, they were subsequently allowed to return to the capital. Although only ten or eleven at the time, the young John attempted to intercede with various members of the Convention to secure his brother's release from prison.  He reports that saw Robespierre "two or three times"  and was received distanty but cordially, but that he talked often to his sister Charlotte and to Eleanore Duplay (p.292).
Read more »
1 comment: 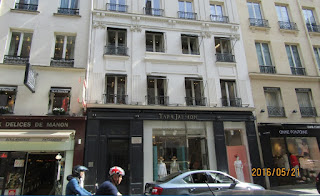 On 17th July 1791, following the Champs-de-Mars massacre, the Minister of Justice denounced Robespierre's discourse to the public accuser and threatens him with pursuit.  According to Fréron, when the Jacobins broke up at 11pm, municipal troops had gathered and Robespierre had some difficulty in forcing his way through the assembled crowd.  He was understandably reluctant to return to to his lodgings, a mile and a half away in the Marais and the deputy Lecointre,  at his request, arranged for him to spend the night with the Jacobin and master-carpenter Maurice Duplay in the rue Saint-Honoré.  In Charlotte Robespierre's account, Duplay rescued him from a crowd of well-wishers in the street. He was eventually induced  to stay permanently.  His new hosts send for his trunk, "la malle du départ d'Arras" and his books from his lodgings in the rue Saintonge.  From this time on, apart from a short interlude when he set up house with Charlotte in the rue Florentin, he enjoyed the familial atmosphere and pious attentions of the Duplay family and "became more or less invisible".
Read more »
3 comments:

The debate over Robespierre's health


In 2013 the popular TV forensic anthropologist Philippe Charlier - unchastened by the debacle over Louis XVI and his DNA - caused yet more controversy  by  his collaboration with Philippe Froesch in the now-notorious  Robespierre "facial reconstruction". Not content with proving Robespierre was an ugly thug, he also pronounced him to have been victim to a hitherto little known disease called "sarcoidosis". Historical diagnoses are always highly speculative but Charlier meant to be taken seriously - he even managed to publish his findings in The Lancet.  Not surprisingly historians were quick to criticise;  Peter McPhee was particularly affronted, since he found his article on Robespierre's "medical crises" cited as Charlier's chief authority. 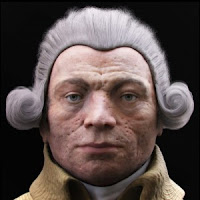 Sarcoidosis, we learn, is "an autoimmune disorder involving the abnormal collection of chronic inflammatory cells that form as nodules in multiple organs" (most usually the lungs and skin.)  The disease was not described until 1877, so naturally it would not have been recognised in Robespierre's time.  There are wide variations in presentation.  According to NHS Choices, the most common symptoms are tender red bumps on the skin, shortness of breath and a persistant cough, though some sufferers have no symptoms at all.  In some cases the condition clears spontanously, and there are both acute and chronic forms of the disease. All of which makes it hard to diagnose without x-ray and detailed medical examination.
Read more »
1 comment:

Where painted portraits fail us, written ones do little better. There is almost literally no neutral description of Robespierre.  He was generally held to be unprepossessing physically. He was short (perhaps only 5 feet 3 or so), slim with light-brown hair and a pale, slightly pockmarked face.  He had poor eyesight and needed spectacles, at times two pairs at once.  His eye-colour was light, usually given as green or blue;  his piercing gaze was probably a myth -  contemporaries who caught  him off guard remarked on the dullness of his eyes.   He also had an uncontrollable nervous facial tic, affecting his eyes and sometimes his mouth.  His voice was harsh to Parisian ears, retaining the accent of the northern provinces. 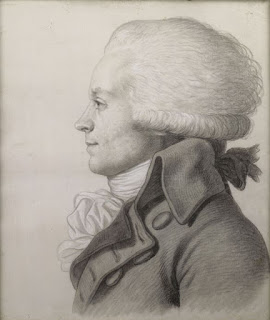 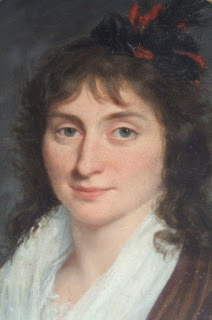 Augustin was great, well formed, and had face full of nobility and beauty. In this last aspect, Maximilien had not so great a share as he; he was of middling form and delicate complexion. His face breathed sweetness and goodwill, but it was not as regularly handsome as that of his brother.
Memoirs of Charlotte Robespierre,  describing her two brothers.
Translated by Estelle La Chatte
https://revolution-fr.dreamwidth.org/3340.html
Read more »
2 comments:

Is there a face of Robespierre?

Here is a montage of some of the images of Robespierre which I rate as most authentic.  Do they capture the man?  Frustratingly the answer is no, not really... 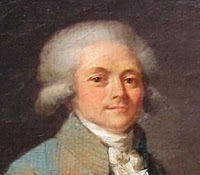 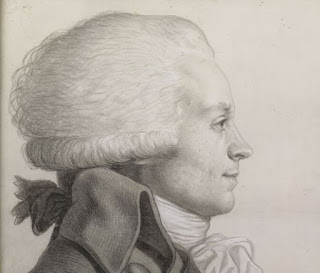 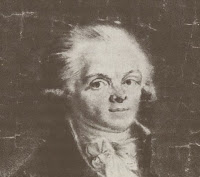 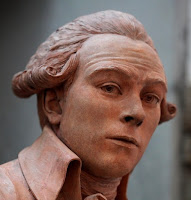 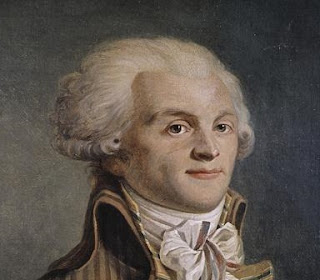 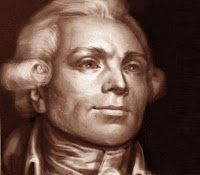 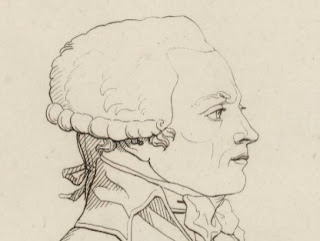 To provide some frame of reference, here are some insightful comments from David Jordan's  The Revolutionary Career of Maximilien Robespierre:

There are two basic representations of Robespierre: one in three-quarters full face, the other in profile....Virtually all the portraits, even those used to caricature the man, are derived from these basic views.  All the formal portraits, as well as the sketches made from life and a great many of the caaricatures, reveal the same features.  In terms of shape of head, size and shape of eyes and nose and mouth and ears, jawline and chin, there is general agreement. Robespierre had large, almond-shaped eyes set off by long eyebrows that curved slightly.  He had a high forehead and in some images appears to have had a receding hairline.  His nose had prominent nostrils, and appeared flat in full face and sloped upward to a slight point in profile.  His mouth was large, his upper lip prominently bowed, and he had large ears.  His chin was articulated but not especially prominent.  His expression derived almost entirely from his eyes and his mouth, and by slight emphasis of one or the other an artist could change his appearance.  There is one curiosity about the face:  in full face it is fleshy in profile angular and lean.... (p.249)
.

A 21st-century portrait of Maximilien.... 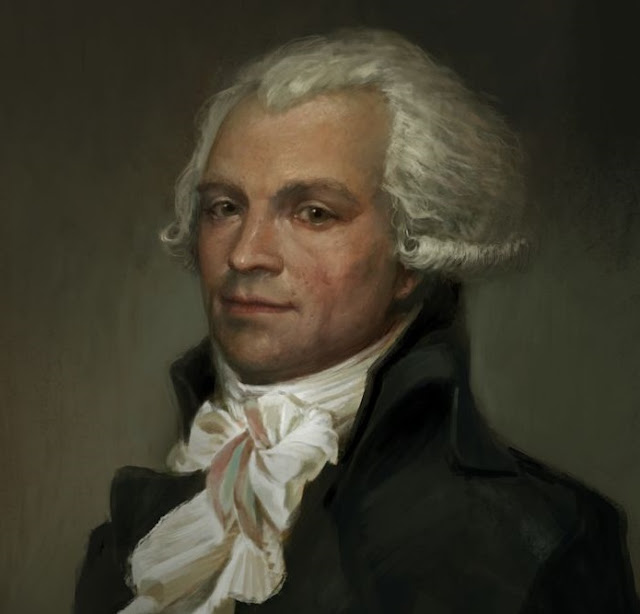 Maximilien de Robespierre by Julien Lasbleiz
"Digital work of Maximilien Robespierre using the death mask and some of the paintings as references.  The purpose was to get the most realistic, accurate and plausible face as much as I could" ©2014-2015 JulienLasbleiz
Read more »
1 comment:


Here is another portrait of Robespierre which has lately appeared on the internet!  This picture, by Joseph Ducreux, went under the hammer at Sotheby's New York in January 2003 for $45,000 - 80% more than the estimate.   Despite Ducreux's close association with the Royal family, he returned to Paris from London in late 1791 and, under the protection of David, exhibited a number of portraits of prominent Revolutionary figures.  The Dictionary of Pastellists lists three Robespierres.  The earliest documentation for this one is in the collection of the banker and diplomat Paul Flury Hérard (1836-1913).  It was previously sold by Drouot in 1919.

Is this really Robespierre? The pinched mouth and receding chin seem unfamiliar; certainly there is no echo of the firm jawline of the lifemask.  Unsettling too is the haunted look. If it is a true image of Robespierre, it is a prematurely aged Robespierre in his final, increasingly paranoid phase;  I for one find it deeply disturbing.

Portrait of Robespierre by Boilly (?)

A very elegantly dressed man, wearing a redingote of light blue taffeta, with reflective weave, a shirt made of lawn, with an ample and high cravat foldered into a ruffle, lace sleeves, a fawn doublebreasted waistcoat,  white nankeen breeches, with five silver buttons, white stockings and shoes with silver buckles." (Beaucamp, p.22)

This portrait by in the Palais des Beaux Arts in Lille has become one of the standard and most widespread images of Robespierre on the internet, yet very little is really known about it.  It was first identified as Robespierre only in 1928, in an article by Fernand Beaucamp.  It is recorded as having been purchased by the musée des Beaux-Arts in Lille in 1863, but all the relevant documentation was destroyed in a fire at the Hôtel de Ville in 1916.
Read more »
1 comment: