Now for something altogether more unpleasant.....

Madame Tussaud's famous tableau of guillotined heads is something of a puzzle. The Tussaud Memoirs state that she moulded the heads of Robespierre and the other Terroristes immediately after they were guillotined, by order of the National Convention and under duress. In some versions, the casts were taken at the very foot of the guillotine:

Everything about this claim, of course, invites scepticism.

The Tussaud Memoirs are transparently unreliable.
According to David Binton, the story that likenesses were made after execution is first mentioned in Tussaud catalogues only 1822 when the heads were moved from the main exhibition to a separate early version of Chamber of Horrors. The claim was then elaborated in the Memoirs, first published in 1838. In the beginning (1803 catalogue) they were simply exhibited with biographical information but no lurid details.

There is no reference among the copious official records of the Revolutionary government.
On the contrary there were considerable efforts to prevent access to the corpses by relic hunters.  According to Antoine de Baecque:
"...we find in the archives of the two committees, the Committee of Public Safety and the Committee of General Security, an order of 10 Thermidor "relative to the disposing of the conspirators." It recommends "the acquisition of a great quantity of time,'" of which, it then says, "a substantial layer will be spread over the remains of the tyrants to corrupt them and prevent them from one day being deified." A series of measures is thus taken in the immediacy of events. The final disappearance of the corpses of the Robespierrists must be hastened, the Incorruptible corrupted: decomposition of the bodies is accelerated, the communal ditch of the Errancis closely guarded, as well as the Rue du Rocher, which leads to it, to avoid any theft of "relics," and a death mask is prohibited, setting this apart from other famous victims of the guillotine, executions in the course of which the executioners were less scrupulous." (Antoine de Baecque, p. 150-1)

﻿It is not easy to make a death mask from a guillotined head!
The traditional techniques of creating a plaster cast for a death mask or a life mask are messy and the logistics are awkward.  It required more than one person and certain couldn't be performed in the open air. Here is a description based on 17th-century methods:
"In order to create a death mask, there was a specific process: First, the deceased’s hair and eyebrows were covered with clay or oil so that the plaster would not stick to it. Next, plaster was ladled over the head of the individual. Sometimes this meant propping them up into a sitting position as seen in the picture or carefully doing it lying down. Next a thread was placed from the bottom of the chin to the top of the forehead in this thinner plaster. Fourth, thicker plaster was added and the string was removed to create a mask in two halves for easier removal. Once hard, the mould was removed, and then placed back together. Before a mask could be made, the plaster cast was cleaned and then filled with modelling clay or new plaster to make the mask" (Katy Meyers, "Preserving the face of death")"

This photograph of 1908 shows the corpse propped into a seated position with two assistants hard at work. I wonder how easy this would be with a severed head? (Not just a picture-book image but an actual decapitated person).

I would have doubted it were possible at all had not the author of the guillotine blog boisdejustice.com attested to the existence of death masks from people guillotined in the early 1800s.  He comments only that they are "much different in expression" from the heads at Madame Tussaud's.(http://revolution-fr.livejournal.com/53118.html)

It is a common misapprehension, again encouraged by the Memoirs, that Curtius and later Madame Tussaud herself habitually modelled "from life".  Respectable sculptors like Houdon and David d'Angers certainly worked from plaster of Paris life masks, but wax artists usually had to be content with clay models. (Kate Berridge, p.55) The early miniatures and elaborate tableaux of Curtius relied more on context that exact representation, with an emphasis on novelty and quick response to changing fashions.
In the Memoirs, the first categorical claims to have created casts from life appear in connection with a series of life-size wax heads made in the late 1770s and early 1780s which were strongly influenced by Houdon sculptures.(Voltaire, Rousseau, Franklin, Mirabeau)  (Memoirs p.367).The genesis of these waxes is in itself something of a mystery (see below)

The jaw of Robespierre shows no sign of injury (beyond a few drops of painted blood).

Was there a life mask of Robespierre?

I was firmly enrolled in the sceptic camp but, having recently visited the Chamber of Horrors, I am not so sure the wax head is simply a fake.  Beneath the tacky wig and painted gore there is a powerful sense of an individual face.  Furthermore, it looks like Robespierre.  David Jordan has remarked on his unusual features in the surviving portraits: the face that looks small and pointed in profile yet broad face-on with a large forehead.  The waxwork is the same. Take a look at it next to the famous Carnavalet portrait:
﻿
﻿﻿﻿﻿﻿﻿﻿﻿ 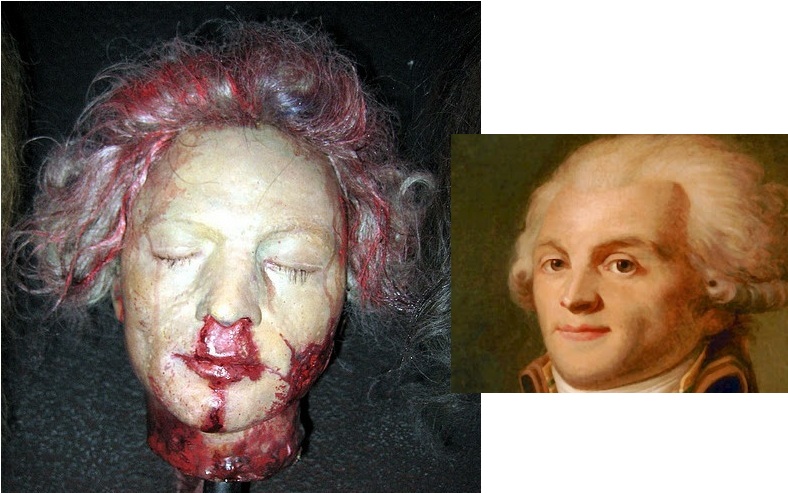 The original mould (which presumably still exists) could simply have been made using a clay figure based on a portrait but it is also just possible it represents an life mask made at an earlier point in Robespierre's career. There are a few tantalising clues:

1. Madame Tussaud's Memoirs actually state that she made a mask herself for the wax tableau of the death of Marat:
After the execution of Robespierre, Madame Tussaud took a cast from his mutilated head; but it was not the first time his features had been submitted to her skilful hands, he having expressed a wish that his portrait should be introduced standing near Marat, as also those of Collot d'Herbois and Rossignol; Robespierre proposing that they should send their own clothes, in which the figures might be dressed to afford additional accuracy to the resemblances. (p.399)

Presumably Collot d'Herbois and Rossignol have long since been melted down.......?

2. A life mask of Robespierre by Houdon is known to have once existed, a preliminary for a statue that was never begun;  David d'Angers later employed an assistant who had helped to create it (Poulet, p.312). There are hints of some sort of relationship between the waxworks and Houdon - the Romance of Madame Tussaud's makes the unlikely claim that Houdon had once worked for Curtius.  The wax Voltaire, which survives, is so finely cast and so close to Houdon's statue, that one wonders whether Curtius had access to Houdon's mould (though his artistry should not be underestimated).

3. Another snippet: A note by David's pupil Delécluze in his Souvenirs states cryptically that David had made a death mask of Marat for his famous picture which was copied in plaster ("surmoulé en plâtre") and sold "with the mask of Robespierre and others". In 1835 the police forbade public exhibition of these pieces.(Delécluze, p.154,nt.)

It is hard to put these clues together in any sensible way, but they do at least suggest that a life mask may have been potentially available. 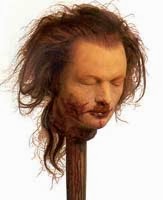 David Binton, The shadow of the guillotine: Britain and the French Revolution (1989)  (catalogue of a British Museum exhibition)