Important chairs 3 - the chair in which General d'Elbée was shot

"On a cold winter day, with the wind blowing in from the sea and ice underfoot, d'Elbée was shot with three other officers.  He sat in an armchair, as he could not stand because of his wounds.  The square where this happened can still be seen outside the castle in Noirmoutier,  as can the filled-in moat where their bodies were thrown and never recovered.  In the museum stands the armchair in which d'Elbée was shot, with five jagged bullet holes in the back.  On the wall, there is a poem by Leblant.  Two lines are as follows:

d'Elbée, hero of the Vendée

Born of an enclosed rural world where ties between peasants and their lords were strong, the sad and bitter conflict of the Vendée produced more than its fair share of romantic leaders. One such was Maurice Joseph Louis Gigost d'Elbée.

The son of a French cavalry officer in the service of Maurice de Saxe, d'Elbée had at first followed his father into the army, serving in Saxony and later in France as a sub-lieutenant in the Dauphin's Regiment.  He was frustrated in his quest for advancement in the military and, in 1783, when still in his early thirties, retired to the family property at Beaupréau in the Mauges to live the quiet life of an impoverished provincial noble.


He was at first well disposed towards the Revolution but was rapidly alienated by its religious policies and for a time joined the emigré army in Worms. In April 1792 he returned to his wife in Beaupréau, where he was well-loved by the local people and known to offer refuge to refractory priests. The birth of his surviving son on 12th March 1793 coincided with the first open conflicts in the Vendée.  d'Elbée was prevailed upon by the peasants of Beaupréau  to lead them into what he himself was inclined to view as a hopeless war.

A much repeated anecdote epitomises the general's romantic virtue. Following the the royalist victory at Chemillé in April, d'Elbée was said to have deflected his men from vengeance against their Republican prisoners by having them recite the Lord's Prayer until they reached "Forgive us our trespasses as we forgive those who trespass against us"; "Do not lie to God!" he exclaimed.

Prelude: the Battle of Cholet

There was a moment in June 1793, following the capture of Saumur, when the road to Paris lay wide open before the ragged armies of the Vendée;  according to Napoleon,"the white flag would have floated on the towers of Notre Dame". But, like the Highlanders of Charles Stuart in Forty-Five, the peasant soldiers melted away back to their farms and two weeks later, Saumur had to be abandoned. The initiative lost, the Vendéens turned instead to advance along the north bank of the Loire, continuing an ill-advised policy of attacks on major centres. Regular Republican troops were now deployed in force and, despite a string of victories, ultimate defeat was probably inevitable. Angers yielded to the royalists briefly, but at the end of June in an ill-coordinated attack on Nantes, Cathelineau was fatally wounded. Supreme command now fell to d'Elbée.

The turning point came when the Royalist were repelled at Cholet on 17th-18th October. The battle was decisive not only because of the casualties and loss of war materials but because of the mortal wounds of three of the remaining royalist leaders. Lescure was incapacitated by a musket ball in the skull, Bonchamps fatally wounded, and d'Elbée, the Commander-in-chief, took no fewer than fourteen separate wounds. 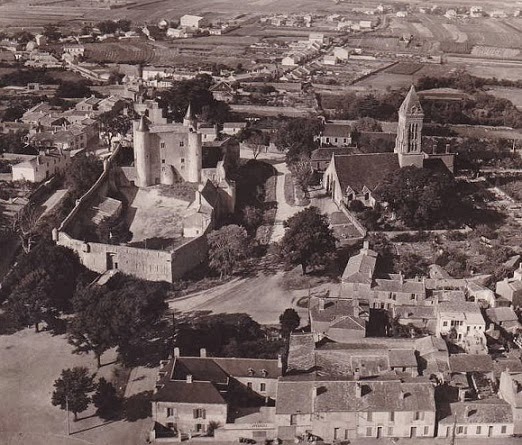 His chest half shot away, the gravely wounded d'Elbée was taken slowly and agonisingly to the island of Noirmoutier, on the Atlantic coast, which was then occupied by the Royalists. Noirmoutier had changed hands four times in the course of 1793, finally falling on 12 October to Charette who considered it a peaceful haven in which the commander could recover. Sadly he was mistaken.

On 2nd January 1794 a substantial Republican force of 7,000 men recaptured the island, advancing along "le gois" a three-mile causeway, still passable at low tide and frequented by mussel collectors though bypassed today by a modern road bridge.

The taking of Noirmoutier was followed by savage reprisals. These were orchestrated by the représentants en mission, Turreau de Linières, Prieur de la Marne and P. Bourbotte, in concert with Carrier in Nantes, and in the face of protestations by the Republican general Haxo who had guaranteed the safety of the capitulating royalists. Sixteen officers of the garrison, plus eighteen priests who had taken refuge on the island, were condemned and shot on the Place d'Armes in front of the chateau.

Not far away in the Church of Saint-Philbert, the men of the Vendée were herded together, with their women and children, perhaps 15,000 souls in all. In the days which followed they were forced out, sixty by sixty, under pretext of appearing before a military tribunal, led straight to a nearby rubbish heap and shot. Later the bodies were recovered and buried in the sand dunes together with victims of further shootings in April, May and June.

The final execution of 22 people in Noirmoutier took place on 3rd August a few days after fall of Robespierre.

The climax to Republican vengeance was the execution of the Vendéan généralissimo himself together with his brother-in-law Pierre Duhoux d'Hauterive, his friend Pierre de Boisy, and Jean-Conrad Wieland, the Republican commander of the island who had surrendered to Charette. The date is  not absolutely certain but between 6th and 9th January 1794. Details of what occurred vary slightly.

Madame d'Elbée, daughter of the former governor of Noirmoutier, had not left her husband's side at her mother's house during the days of his agony.  A Republican aide-de-camp recounts how, wishing to spare her the pain of a final parting, he took her to the commander's office on the pretext of an interview with her brother Duhoux d'Hauterive.


The prisoners were probably taken first to be formally condemned by the military commission which was in session in the imposing Maison Jacobsen. They were then led out to the Place d'Armes to be shot.

Here the entire Republican army was drawn up around a tree of liberty, an enormous popular brought from the nearby Bois de la Blanche.  At its foot were four stakes destined for the four men.

The représentants Bourbotte and Turreau watched from the balcony of the Maison Jacobsen as d'Elbée was carried out in his armchair. In some accounts the chair was from the grand salon where the military commission sat, in others, perhaps more plausibly, it was from his mother-in-law's house where he had been propped upright for some time struggling to breathe.


At the moment when the troops parted to allow Elbée through, a priest rushed forward to offer him a crucifix. Madame d'Elbée, realising the ruse, struggled in vain to reach her husband, crying that she wished to die with him.  Duhoux d'Hauterive and Boisy were tied to their stakes. Wieland meanwhile had been playing for time before the commission, reading a memoir of justification and pleading for a twenty-four hour stay of execution. By order of représentants he too was dragged out and tied up with his memoir still in his hand. Drums rolled. The formal condemnation was read.  Wieland protested that he was no traitor and the généralissimo and his two companions began to speak in his defence, but their words were cut short by the sound of bullets.

Madame d'Elbée did not have long to wait to share their fate, for she too was shot some twenty days later, on 29th January, with her childhood friend Madame Mourain de l'Herbaudière. Her remains were recovered and reburied in 1808.

The armchair was rescued and kept in the d'Elbée family until 1975 when it was given to the newly created museum at the Château de Noirmoutier.

Vendée tourist guide, Noirmoutier, with video of the castle and museum.
http://www.vendee-guide.co.uk/ile-de-noirmoutier.htm