After Pierre Gobert, Mademoiselle de Charolais as penitent / Franciscan monk
(94cm x 72cm).
Auctioned in 2005, current whereabouts unknown.
Wikimedia [from ArtNet]
The subject of this curious portrait is Louise-Anne de Bourbon-Condé, Mademoiselle de Charolais (1695-1758), the notoriously promiscuous granddaughter of Louis XIV and Madame de Montespan. Although portraits in fancy dress of various kinds were popular in the early 18th-century, no-one seems quite certain why she chose to have herself depicted in this singularly inappropriate costume.  (This is distinctly a masculine habit - Franciscan nuns always wore elaborate headdresses.)
Read more »
No comments:

The Farmer-General, his wife, her lover and ... a fireplace

It feels high time to cheer ourselves up with some sexual scandal. One of the century's most talked about liaisons involved the notorious duc de Richelieu and Thérèse des Hayes, the wife of the Farmer-General Alexandre de La Pouplinière. The most sensational feature of this affair was the spectacular discovery by the cuckolded husband of a specially constructed fireplace in his wife's room, which allowed her lover secret ingress from the adjoining house.
Read more »
No comments:

Diderot, Bouret and his dog

The story of Bouret and his dog has been made famous by Diderot in Rameau' s Nephew:

Rameau's nephew ("Lui") defends his reprehensible life as a social parasite on the grounds of moral determinism and cites Bouret 's innate natural ability in the art of flattery, a skill which has served him well:  "Only God and a few rare geniuses can have careers that keep stretching out before them as they advance".  His incident concerning the dog is one of three, ostensibly well-known,  examples of Bouret's  ingenuity, the others being the "Book of Felicity" and "torches lighting the way to Versailles". The first of these references is clearly to Bouret's famous book in the pavillon du roi,  described in the Correspondance littéraire for March 1764.  Bouret is recorded in 1759 as having stationed torchbearers at intervals along the King's progress from Versailles to La Croix-Fontaine.

According to Rameau's nephew, the  Keeper of the Seals took a fancy to Bouret's little pet dog and Bouret decided to make him a present of it.  He was obliged to go extraordinary lengths  since he had to persuade the animal to accept the minister as his new master. The creature, who was extremely attached to Bouret, was frightened by the minister's bizarre clothing.  Moreover Bouret was under time pressure, for he has only a week to achieve the feat. He had a mask made to disguise himself as the Keeper of the Seals, borrowed the man's wig and voluminous robe, then petted the dog and enticed it with titbits to eat;  reverting to his own identity, he then gave  the animal a beating.  By repeating the exercise from morning to night, the dog was soon persuaded to prefer the minister. Rameau's nephew professes  admiration for this remorseless attention to detail - "Having a mask made to look like him! It's the mask I find so staggering". Genius of this sort is born, not made:  "Who ever gave Bouret any lessons?  No-one. It's nature that forms these rare men.  Do you think the dog and the mask is written down anywhere?" (2014 English edition, p.52-55)

A Pavilion fit for a King

This portrait, by Louis-Michel Van Loo, is from the collection of the late couturier Hubert de Givency which is to be auctioned by Christie's in Paris at the end of the month. If you have €60,000-€ 80,000 to spare, this glossy, this splendid, rather self-satisfied eighteenth-century gentleman could soon adorn your walls.... 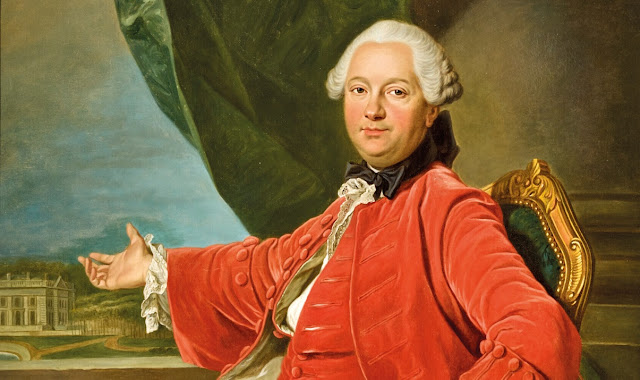 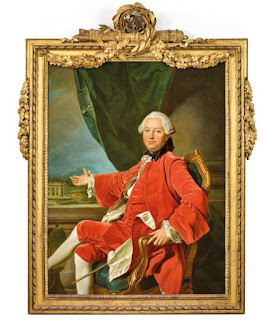 As it happens, the subject fits in neatly with my current theme of financiers and tax farmers.  He is Étienne-Michel Bouret - perhaps the most absurdly rich and profligate of them all.

According to Lenotre, Bouret was "le prototype des parvenus".  The most famous of three brothers, he rose from modest origins -  legend he had it he arrived in Paris with only 20 écus - and amassed fortune through transport of salt for the gabelle and later through speculation in the grain trade.   He accumulated even greater wealth through a series of lucrative Royal offices -  General Treasurer to the Royal Household in 1738 and Postmaster General in 1752 - and in 1741 joined the exalted ranks of the Farmer-Generals.

In an age of ostentatious luxury, Bouret stood out for his extravagance. Biographers estimate that his fortune at its peak could have been reached as much 42 million livres.   Voltaire later maintained that he spent up to 200 livres a day to have fresh seafood relayed by road from Dieppe.(Requête à tous les magistrats du royaume, 1769).  It was above all the scale of his building projects which drew scandalised attention.   He maintained a splendid hôtel in the rue de la Grange-Batelière (later sold to Laborde), and constructed an magnificent "pavilion" at Gonesse  ("What folly!", wrote d'Argenson, who disliked him: "What an insult all this is to the people.").