After Pierre Gobert, Mademoiselle de Charolais as penitent / Franciscan monk
(94cm x 72cm).
Auctioned in 2005, current whereabouts unknown.
Wikimedia [from ArtNet]
The subject of this curious portrait is Louise-Anne de Bourbon-Condé, Mademoiselle de Charolais (1695-1758), the notoriously promiscuous granddaughter of Louis XIV and Madame de Montespan. Although portraits in fancy dress of various kinds were popular in the early 18th-century, no-one seems quite certain why she chose to have herself depicted in this singularly inappropriate costume.  (This is distinctly a masculine habit - Franciscan nuns always wore elaborate headdresses.) 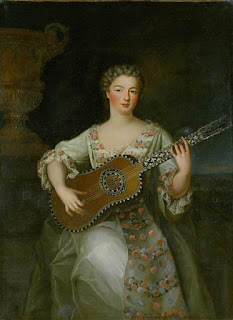 Between 1717 and 1730 at least half a dozen versions of the portrait were produced by the studio of the Court painter Pierre Gobert.  This one was auctioned in 2005.  Another, almost identical study, attributed to a "follower of Nattier", was sold by Coutau-Bégarie in 2010.
https://www.coutaubegarie.com/en/lot/7102/1368301
The musée Condé at Chantilly owns a miniature version in enamel by Charles Boit.
Comparison may be made with Gobert's Mlle de Charolais with a guitar, in the musée de Tours.
https://www.pop.culture.gouv.fr/notice/joconde/02650000330
The portrait was well-known at the time and attracted much ribald comment, especially given Mlle de Charolais's well-publicised affair with the duc de Richelieu. Voltaire, who was friendly with both, wrote an light-hearted verse
Frère Ange de Charolais,
Dis-nous par quelle aventure
Le cordon de saint François
Sert à Vénus de ceinture ? »
Dear Brother Angel Charolais / Tell us by what exploit / The rope of Saint Francis / Serves as the girdle of Venus?
Pour Mlle de Charolais OCV, vol.3A (c.1722-27).
The date of Voltaire's poem is not certain - it may possibly date from as early as 1718.
Other, less polite verses, circulated, some sung to the tune of the popular tune of Robin ture lure.  Some survived to be collected by Maurepas.  Among the politer:
Beau saint François, ne souffrez pas
Qu'on perce vos mains délicates;
Dites a l'ange: C'est plus bas
Qu'il faut appliquer les stigmates.
Beautiful, saint Francis / Don't let them pierce your delicate hands / Tell the angel:  It is further down / That stigmata should be applied.
Other versions of the portrait
There are several later examples, some only presumed to represent Mlle de Charolais: 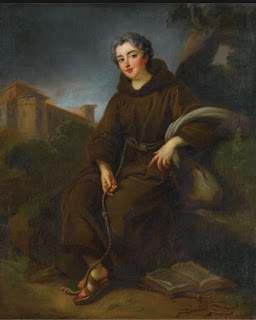 Anonymous / "School of Nattier", Portrait of Mlle de Charolais in the costume of a Franciscan monk
Musée des Beaux-Arts,  Béziers
(60cm x 52cm)
Bequest of Dr Louis La Caze, 1869.
Louvre Collections
Charles-Joseph Natoire, Mademoiselle de Charolais as a Franciscan monk.
Versailles, Apartments of Madame de Pompadour
(118cm x 90cm).
Versailles collections
The attribution to Natoire is based of a signed preliminary sketch  discovered in the Hessisches Museum in Darmstadt and the picture is securely dated to around 1730. To Neil Jeffares (2004), the portrait appears stylised and not necessarily taken from life .  The frame has a copy of Voltaire's verse on it, and the carefully positioned accessories contain clear sexual references: the love knot in the girdle, the cat, the spoon, the pen, the cup of chocolate which was considered an aphrodisiac.
It adds a certain sexual frisson to know that this picture might once have belonged to the marquis de Sade.  A "Mademoiselle de Charolais dressed as a Franciscan" , was inventoried  among the paintings at the Château de Lacoste in 1769 and 1778. The notice in the Louvre identifies it with this portrait, though this is not known for certain. In 1927 the picture was inherited by the duchesse de Caylus and, after some to-ing and fro-ing in the 1940s, came into the Versailles collections after the War.  That there was a portrait of Mlle de Charolais at Lacoste  is not in itself surprising;  Sade's mother was lady-in-waiting to the princesse de Condé, and his father was one of Mlle de Charolais's many lovers.  After brief liaison in 1725, he lodged with her at her château d’Athis-Mons during the 1750s.  A copy of her will transcribed in his hand is currently on sale on Edition-Originale.com.  Intriguingly, in the final years of his life, the Marquis de Sade himself kept a miniature of "Madame de Charolais in a Franciscan habit" with him in his room in the asylum at Charenton ( For a  full discussion ,see the article by Melissa Perceval ). 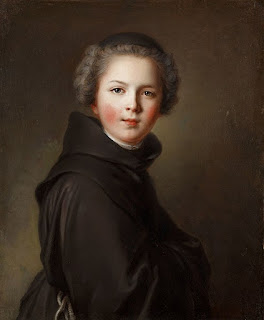 According to Neil Jeffares (2004, p.17) this portrait is attributed to Nattier by Xavier Salmon and may perhaps show Mlle de Charolais's true face.  If so she seems unrealistically young. 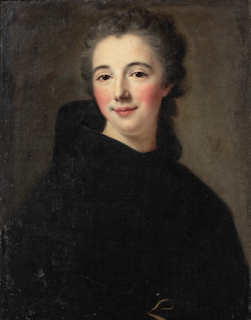 Attributed to Marianne Loir,  Presumed portrait of Mademoiselle de Charolais  in a Franciscan robe.
(55cm x  43cm)
Wikimedia
This portrait was auctioned by Rouillac at the chateau d'Artigny, 06 June 2021. There does not seem to be much information to be had about the picture, but it is interesting (?reassuring) to have a version of the theme by a female artist.
https://www.rouillac.com/fr/lot-552-137095-attribue_marianne_loir_paris_vers_1715_1769

Who commissioned the portrait?

One tradition ascribes the initiative to the duc de Richelieu who was  Mlle de Charolais's lover in the period c1716-20.

- According to the Princesse Palatine, Richelieu, who was still in his early twenties at this time, commissioned portraits of Charolais and other mistresses en travesti.  On 31st March 1719 she wrote, "The Duc de Richelieu has had all his mistresses painted wearing the dresses of different religious orders. Mademoiselle de Charolais is painted as a Recollet and they say the likeness is striking. The Marechales de Villars and d'Estrees have Capuchin robes. . .". (Letters of Madame...vol. 2 (1925) , p.119. [Internet Archive ]).  Sadly, no trace of these last two portraits has been found.

- There is another mention in the journal of the Venetian artist Rosalba Carriera, who visited Paris in 1720-21, when she painted pastels of both Mlle de Charolais and her sister Mlle de Clermont.  In the entry for November 1720, she refers to "the famous collection of Richelieu, where each of his mistresses is represented in the costume of a religious order":  Mme de Parabère, the mistress of the Regent, is portrayed as a carmelite; Mlle de Charolais "en capucine" and Mme de Villeroi "en récollette".[Journal, published 1865 p.253] Google Books)

Although rumour of the collection was evidently widespread, it seems that very few people had actually seen the paintings.  Later, Richelieu's supposed memoirs embroidered the tale:

I had the idea of having portraits painted of the various beauties who had deigned to give me sittings before they gave them to the painter; and madame de Polignac recognised herself in the crowd.  The frames were arranged on the panelling by order of date.  Madame de Polignac, who saw herself among the first numbered, had the coquetterie to demand that I rearrange them; and argued for ordering by title; the duchess of Bourgogne, who was there only as my godmother, remained the first;  then came madame the duchesse de Berry, then mademoiselle de Valois, then mademoiselle de Charolais, then the duchesses, the marquises, the countesses, right down to poor madame Michelin...The portrait formed a charming collection that all the amateurs of the time talked about, but few had seen.  Each woman was painted in a fantasy costume, one was a queen, another a shepherdess, others in masculine costume, usually that of their husband.  I had verses engraved on the base of each frame as epitaphs to my old loves; the greatest poets of the time made contributions to these poetic legends;  everybody knows the pretty quatrain of Voltaire for my portrait of mademoiselle de Charolais in the costume of a Cordelier...
Mémoires historiques et anecdotiques du duc de Richelieu by Lamotte-Langon (1829) vol.3, p.35-36.[On Google Books]
- The Vie privée du maréchal de Richelieu  records that Richelieu and Mlle de Charolais would meet outside convent of the Cordeliers, hence a possible Franciscan connection. It was also given out - and it is still credited by Wikipedia - that the costume could conveniently be whipped off  to reveal her naked body beneath..... There is more than a suggestion of masculine fantasy here!

Although Richelieu may indeed has suggested the conceit, it seems unlikely that he was actually responsible for the portraits of Mlle de Charolais. If his collection ever existed,  it could not have been formed without the complicity of his mistresses.  The couple shared a love of theatrical dressing up and elaborately staged love affairs.

A few scraps of information confirm the idea that Mlle de Charolais herself was responsible for the portraits:

- According to Melissa Perceval,  account books at Chantilly record that Mlle de Charolais paid Gobert 100 livres for a portrait in 1717.

- In the grounds of her summer residence, the château d'Athis, acquired in 1745, Mlle de Charolais built a petite maison known as the "pavillon d'Aurore".  In 1836 it was still inhabited by an old couple who had preserved the original decor. A visitor reported that the salon had six fine quality full length portraits representing members of the Charolais family "travestis en religion", including Mademoiselle de Charolais in the habit of a Cordelier (1836).  In another book published in 1860 the portraits are again described, though two of them had by now been removed to Paris.

- Gaston Duchesne, Mlle de Charolais's early 20th-century biographer, assumes that the Franciscan fantasy was her own:  See p.11:  She was taken with religious ideas, and when at home in her petites maisons (at the château de Madrid in the bois de Bologne and later at Mons-Athis), she would dress up in the costume of a Cordelier and for several days she would follow a monastic rule that her imagination suggested to her.  See also p.106: In June 1740, having lost credit with the king, she took refuge at Madrid and dressed as a Cordelier.

Gaston Duchesne, Mademoiselle de Charolais, Procureur du roi, Paris, 1909,
https://gallica.bnf.fr/ark:/12148/bpt6k74463c/f25.image
- The abbé Bellanger, in his history of Neuilly, relates that Mlle de Charolais had promised 20,000 livres for a new church in Neuilly then failed to show up for the foundation ceremony.  To make amends, she had offered further funding:  "On this occasion, in order to receive the thanks of the chapter of Saint Honoré and the notables of Neuilly, she had the strange fantasy of having herself painted by Boucher(sic) in a religious habit, choosing the most austere and hard of the orders, the Franciscans."
Bellanger, Histoire de Neuilly (1855), p.113.[Google books]

It is hard to come to definite conclusion, when provenance of the various paintings is so uncertain.  However,  Melissa Perceval is probably right to see Mlle de Charolais herself as the prime mover.

The link between sexual transgression and religion is clear enough.  This probably accounts for Sade's attraction to the picture, although we are a world away in mood from his dark preoccupations with blasphemy and perversion.   The image feels like a feminine conceit and, especially in the earliest versions,  not a very sexually freighted one. One might contrast, for example, the far more risqué portrait of  Mlle de Charolais's sister,  Mlle de Clermont, "en sultane", commissioned from Nattier in 1733.

The costume, which is sometimes described as that of a  Franciscan penitent, was perhaps intended - at least playfully - to signal contrition and renewed chastity.   We know that in 1716, at the time of the first portraits, Mlle de Charolais's secret liaison with Richelieu was discovered, and she was compelled (if only temporarily). by her  mother and the bishop of Condom to break off the affair.   According to Gaston Duchesne, she affected Franciscan dress at times of retirement when she had fallen out of royal favour.

Melissa Perceval has it that the portrait is "a powerful statement about female emancipation".  This is perhaps a little overstated, but the image may well be read as a piece of self-justification on Mlle de Charolais's part,  one that was certainly not without an element of defiance and challenge.