The four Terrorists (Robespierre, Hébert, Carrier and Fouquier-Tinville) were the revolutionaries most execrated after Thermidor and under the Directory. Having been displayed in Paris, the moulds for the heads were brought to London by Madame Tussaud in 1802 and later formed the core of theTussaud historical collection.  Louis XVI and Marie-Antoinette were added to the tableaux much later (in 1865, after Madame Tussaud's death). These wax heads (perhaps with the exception of Robespierre) are surely just well-crafted models........?   Or are they?  Here are some pictures. 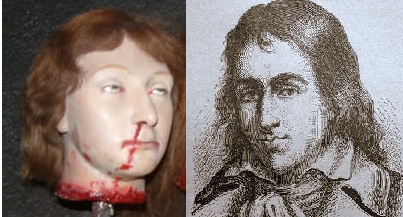 Jacques Hébert. "Père Duchesne"
Executed 26th March 1794
Hébert was one of the last guillotine victims to be buried in the Cimetière de la Madeleine.

A hated figure in the post-Thermidor and Directory periods. Revelation of Carrier's atrocities in Nantes had left the jury at his trial dumbfounded. This is one of the first wax models which can be definitely dated to after the death of Curtius on 24th September 1794. The likeness is particularly striking, especially when compared to the portrait by David. The expression and the irregularities of features really make you feel this could have been taken from life. 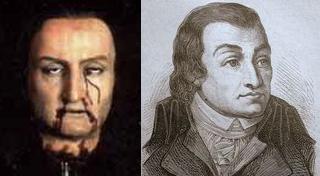 Antoine Quentin Fouquier-Tinville
Public Prosecutor of the Terror
Executed 7th May 1795
Buried in the Cimetière des Errancis
Again, the likeness to surviving portraits is impressive.