The Encyclopédie on tobacco

The account of tobacco manufacture in the Encyclopédie, is based on practice at the tobacco works in Paris, which was adjacent to  the Hôtel de Longueville.  The article was published under the name of the Chevalier de Jaucourt, but was no doubt based on copy supplied an official of the Ferme de tabac.

Jaucourt's informant notes that the manufacture of tobacco products demanded neither complicated machinery nor highly skilled workers; however simple operations require care and attention throughout the process, from the choice of materials to the finished product.

The magasins or warehouses for storage of raw tobacco were designed to offer protection from sunlight and humidity.  They were very large, since newer leaves had to be constantly moved and piled up to avoid uncontrolled fermentation.

Tobacco was processed into a number of different finished products, each with a particular name and usage. The two most common in Paris were rolls for the pipe and  tabacs "en carotte", that is compressed tobacco for grating.   The article illustrates the steps in manufacture:

The tobacco is transported to the manufacture in wooden barrels called "bocaux".  It arrives as bundles  ("manoques"), ie. handfuls of leaves bound together and tied using a corded leaf at the top.  These have to be separated out and the leaves rubbed clean and graded.  "Époulardage" is jargon de l'atelier for shaking off the dust -  the bundles resembled chickens with flapping wings (see the clip below, from Morlaix in 1986).
2. La mouillade 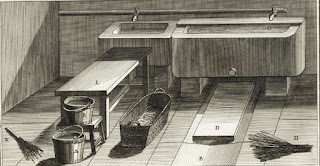 In the second workshop the tobacco is "moistened".  The leaves arrive very dry, so that water must be added, sometimes also salt-water to inhibit fermentation.  The smallness of the windows prevents the tobacco's exposure to direct sunlight.
3. L'Écotage
In the third atelier the tobacco leaves are "stripped" by the removal of the central stalk.  This work is often done by children.
The process of manufacture illustrated in the Encyclopédie is the same as the one shown in the illustration from Le Havre in 1728 (see previous post). The tobacco is "spun" into "rôlles" or "boudins".  Two methods are shown: à la française, where a child turns a bobbin to create twists in the rolls of tobacco and, to the right, à la hollandaise, where children under the table pass up the tobacco leaves to the spinners.
Further illustrations show the process of producing "carottes"  for grating into snuff.   The spun tobacco is first cut into lengths or "bouts".  Several lengths are then placed together in wooden moulds and compressed to form the carottes.  Finally the carottes are wound into jackets of string (les ficelles). 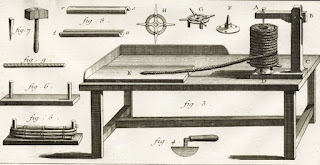