Following the death of Helvétius and the marriage of her daughters, Madame Helvétius retired to a spacious house in Auteuil which she bought in 1772 from the artist Quentin La Tour. She lived here until her death in 1800 when, in accordance with her instructions, she was buried in her garden. "Minette" inherited her husband's circle of liberal-minded writers and celebrities and partly funded the creation of the influential Masonic "Lodge of the Nine Sisters" which held its initial meetings in her living room.

To their mutual pleasure, her guests often included Benjamin Franklin who, during his eight-and-a-half year sojourn in Paris from 1776 to 1785, lodged within walking distance in nearby Passy.

Often portrayed as a glittering society gathering, the "Académie d'Auteuil" comes across rather as a comfortable circle of mutually supportive and, for the most part aging, friends. Two of them, the archetypal "literary abbés", André Morellet and Martin Lefevbre de la Roche, Helvétius's literary executor, actually lived on the premises, as did the much younger Pierre-Georges Cabanis, a doctor and poet, who was something of an adopted son. La Roche and Cabanis shared a small pavilion in the extensive garden. The three lived together, wrote La Roche, "without the slightest altercation"; they shared the same friend and she treated them all impartially. The pleasures of the table, philosophical small talk and plain badinage mingled pleasantly. Franklin himself, who enjoyed easy and courteous relations with women, was much charmed, attributed Madame Helvétius's popularity to her good humour and lack of pretension rather than her intellect - it was said she could spell no better than her numerous cats.  Although not considered conventionally beautiful, the vivacious sixty year old never lacked admirers.  The serious and socially awkward Turgot, who was a frequent guest, proposed to her in vain both before her marriage and after Helvétius's death in 1771. On catching sight of her the ever gallant nonagenarian Fontenelle once commented simply, "Oh to be seventy again..!"


In early 1780 Franklin himself proposed marriage. The seventy-four year old widower was not in any way serious - his good-humoured pursuit was merely an excuse to take time out from the pressing affairs of the American colonies for series of witty literary compliments. The most well-known, the "Elysian Fields", generally dated to January 1780, was published in April as part of a collection of French Bagatelles produced on the private printing press at Passy. According to Morellet, Franklin composed the piece in jocular mood: Madame Helvétius received it one morning "after engaging him the whole previous day in a conversation full of mere foolishness". The existence of various versions suggests that it  circulated initially as an essay in French composition.  An English version was published in Volume III of Memoirs of the life and writings of Benjamin Franklin:

Disappointed in his hopes of marriage, Franklin dreams of a visit to the Elysian Fields where where he finds to his surprise that Helvétius and Debbie Franklin have "formed a new Connexion":

Mortified at the barbarous resolution pronounced by you
so positively yesterday evening, that you would remain single
the rest of your life, as a compliment due to the memory of your hus-
band, I retired to my chamber. Throwing myself upon my bed, I dreamt
that I was dead and was transported to the Elysian Fields.

I was asked whether I wished to see any persons
in particular ; to which I replied, that I wished to see the
philosophers. " There are two who live here at hand in this
garden ; they are good neighbors, and very friendly towards
one another. " - Who are they?" " Socrates and
Helvetius." "I esteem them both highly ; but let me see
Helvetius first, because I understand a little French,
but not a word of Greek." I was conducted to him ; he
received me with much courtesy, having known me, he said,
by character, some time past. He asked me
a thousand questions relative to the war, to the
present state of religion, of liberty, of the government
in France. - "You do not inquire, then," said I, "after your dear friend,
Madame Helvetius ; yet she loves you
exceedingly ; I was in her company not more
than an hour ago." "Ah," said he, "you make me
recur to my past happiness, which ought to be
forgotten in order to be happy here. For many
years I could think of nothing but her, though
at length I am consoled. I have taken another
wife, the most like her that I could find ;
she is not indeed altogether so handsome, but
she has a great fund of wit and good sense,
and her whole study is to please me.
She is at this moment gone to fetch the best
nectar and ambrosia to regale me ; stay
here awhile and you will see her." " I
perceive," said I, " that your former friend
is more faithful to you than you are to her ; she
has had several good offers, but has refused them
all. I will confess to you that I loved her
extremely, but she was cruel to me, and
rejected me peremptorily for your sake." -  "I
pity you sincerely," said he, "for she is
an excellent woman, handsome and amiable. But
do not the Abbe de la R**** and the Abbe M****
visit her?" "Certainly they do; not one of
your friends has dropped her acquaintance." - "If
you had gained the Abbe M*** with a bribe of
good coffee and cream, perhaps you would have succeeded ;
for he is as deep a reasoner as Duns Scotus or St. Thomas ; he
arranges and methodizes his arguments
in such a manner that they are almost irresistible. Or, if
by a fine edition of some old classic, you had
gained the Abbe de la R**** to speak against you,
that would have been still better ; as I always observed, that
when he recommended anything to her, she had a great
inclination to do directly the contrary." As he finished
these words the new Madame Helvetius entered with the nectar, and
I recognized her immediately as my former American friend,
Mrs. Franklin! I reclaimed her, but she answered me
coldly; " I was a good wife to you for forty-nine years and
four months - nearly half a century; let that
content you. I have formed a new connection here,
which will last to eternity."

Indignant at this refusal of my Eurydice, I immediately
resolved to quit those ungrateful shades,
and return to this good world again, to behold the sun
and you! Here I am - let us avenge ourselves!

The conceit is a little clumsy as is the final "let us avenge ourselves!", but Franklin depicts his cast with gentle humour:  Helvétius absorbed in military, religious and political questions;  Debbie Frankin bustling around to find the best nectar and ambrosia and the abbé Morellet relishing subtle arguments and large helpings of cream.

A second Bagatelle puts pay to any lingering doubts about Franklin's seriousness. It dates from end of 1780 when Franklin had been laid up for six weeks with gout and is, in effect, a thank you note for some housecleaning Madame Helvétius had organised.  It features a jolly chorus of pirouetting houseflies and translates loosely as follows: 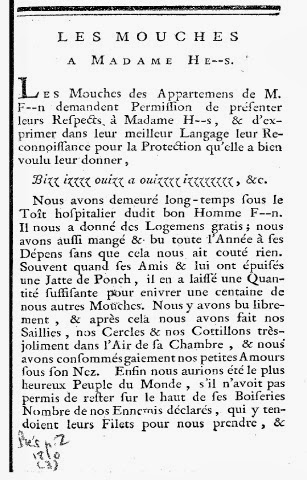 The "Flies of the Apartments of Mr. F[rankli]n" pay their respects to Madame Helvétius  and thank her for the protection she has given them.  They have long enjoyed the hospitality of  the Good Franklin, eating at his expense and finding in his emptied punchbow "sufficient quantity to inebriate a hundred of us flies".  They have merrily swirled around his rooms and consummated their little loves under his nose.  Their happiness would have been perfect had he not allowed  "our declared Enemies" the spiders, with their pitiless nets to remain at the top of his wainscoting.  But under Madame's orders "all these assassins with their habitations and their snares" have been swept away, and the flies can now enjoy Franklin's beneficence without fear. They have only one wish left, that their two patrons henceforth form a single household.

It says much about the state of Franklin's accommodation that Madame Helvétius, who was notoriously relaxed in such matters, was driven to offer him domestic assistance! 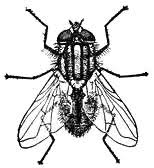 Franklin's suit occasioned considerable good-humoured teasing from Madame's various "rivals" in his social circle, notably Madame de la Ferté, Madame Brillon and the comtesse de Forbach. His communications to all these ladies were affectionate and sometimes playfully flirtatious. In a bagatelle addressed to Madame de la Ferté, for instance, Franklin complained that  he had been deprived of "half a dozen of her affectionate, substantial and heartily applied Kisses".  It was in a letter to her that he enclosed a third ditty on the Helvétius household - not a romantic sally this time but a mock complaint that he and William Temple Franklin had been "bilked for breakfast",  trekking from Passy on the promise of brunch only to find their hostess had forgotten them and Morellet eaten all the available food.


Madame Helvétius remained a constant friend and a faithful correspondent. In a final touching letter, written two years after Franklin's return to Philadelphia, Minette looked forward to their reunion in the Elysian Fields:   "Very soon we will meet again,, with those whom we have loved, I husband and you a wife, but I believe that you, who have been a rascal, will find one more there, my dear Franklin....."

In lighter - but prescient - mood the abbé de la Roche reminisced on 27 July 1787 about a world soon to be lost forever: "We were so happy, were we not, when sitting all together around a good table; when we discussed ethics, politics, philosophy; when Notre Dame d'Auteuil led you on to flirt and the abbé Morellet, while fighting for the cream, set his arguments in magnificent sequence, so as to convince us of what we did not believe.  In those days we would gladly have renounced that other Paradise to keep the one we had, and live, just as we were, for all eternity."


For the landmarks of Franklin's stay in Paris: ParAmericana Paris Americana - blog on US French links.