In Lyon in September 1792 food shortages and price rises combined with sharpened fears of counter-revolution to produce the first considerable popular unrest since 1790.  The Musée Gadagne  preserves a couple of interesting relics from this period,  - a nasty looking iron pike, inscribed "Les Citoyennes de Lyon 1792" and a poster presenting a pricelist of basic commodities.

Disturbances began on 9th September, when, in imitation of the Parisian prison massacres, eight officers of the regiment of Royal-Pologne held in the fortress of Pierre-Scize,  were seized and killed together with three refractory priests,, and their decapitated heads paraded around the city. There followed two months of disorder which the  mayor Louis Vitet and his supporters were unable to bring under control and which the National Guard made no serious efforts to stop.

The crisis of food supply deepened.  Shipment of grain along the Saône had entirely ceased and the authorities and merchants of Lyon bought goods only to have them stopped in transit in the districts of Tournus and Trévoux.  The departmental, district and municipal authorities all sent out commissioners to search for provisions but in vain; on the 14th there were disorders in the market places and the Council for Rhône-et-Loire declared that stocks of grain were about to run out entirely.  All goods were dear; the workers, who received their salaries in assignats were now paying almost double pre-Revolutionary prices.   On the 15th a deputation of women presented a petition to the municipality, complaining that they "died a thousand times seeing their children go without basic necessities," and demanding that prices be lowered for basic commodities.  Without waiting for a reply from the municipality, they drew up a tarif of goods, had it published and posted. 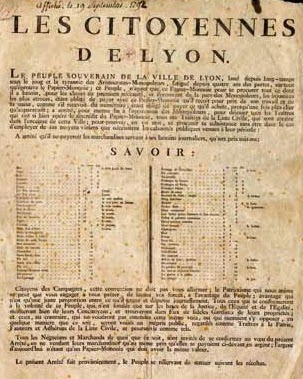 "The sovereign people of the town of Lyon have laboured long under the of tyranny of monopolising aristocrats and are tired of the losses brought about by paper money. The people,with only  paper currency to buy the necessities of life, have suffering terrible injustices at the hands of monopolists.  They receive the same rate as they did before for their toil, but have to pay almost as much again for goods. To end oppression by the monopolists, to thwart all the traitors on the Civil List, still within the city limits, in a word to be able to procure subsistence without having to resort to the violence necessitated by the public calamities of the day, the people have decreed  that they will only pay for everyday necessities at the following prices:

Citizens of the countryside should not be alarmed by this agreement; the patriotism which motivates us demands only that you work to the advantage of the people, that is to establish a just proportion between wages and expenses.....

.....  All those who conform to the will of the people, which is founded on justice, equity and equality, will be respected by their fellow citizens and will find in them faithful guardans of their property. Those who do not listen or who dare to show opposition will be subject to public scorn and regarded as traitors.  All traders and merchants are invited to comply with the present regulations, and to sell their goods only at the same price as they formerly charged in silver currency."

For a week grocers' shops were systematically raided in almost every quarter of the city. Goods were commandeered and sold off: "the people, almost the whole people, is raiding the shops to recover all the foodstuffs; almost all the women have come out to take them." (Report of the Municipality to Roland, 19 Sept. 1792)  At least 113 grocers' shops were pillaged between 17 and 19 September and one wholesale merchant's stock of cheese, valued at 21,000 livres, was sold off in one day.  The three administrative authorities, departmental, district and municipal met in common on the 17th, but a menacing crowd made its way to the town hall and pelted the grenadiers on duty outside with stones; someone set of a gun and several people were wounded, two killed and the town hall had to be evacuated.  The municipal commissioner Bonneville succeeded in diffusing  the situation with promises of  measures to alleviate the food shortage.  Next day, amid further scenes of pillage, the municipality finally capitulated:  fearing that "the city would be put to the torch...and the majority of the wealthy citizens murdered", it decreed price controls for eggs, butter, meat and bread (the cost of which was thus artificially reduced from three sous per livre to two). However, the regulations had little real effect and on 9 October, after the agitation had subsided, the price controls were lifted.

Contemporary observers were unanimous that the movement was spearheaded by the women themselves. According to the Jacobin Laussel, the petition was instigated  by some forward women and a few male supporters ["quelques femmes de la lie des coquines et quelques souteneurs en petit nombre" Letter to Roland, 22nd September] One "supporter" - probably Chalier's colleague Bussat - was certainly responsible for  printing the poster. The notice shows that the women were aware of the current political debate, interpreting their own circumstances in the light of notions of popular sovereignty and direct action, as well as popular concepts of fair price.  According to the Journal de Lyon of 20 September the women insurgents formed a "deliberating society".  Female police commissioners ["commissaries de police femelles"] patrolled the markets armed with pikes to control any excesses.

Women also subsequently participated in the clubs and the thirty-four sectional assemblies of Lyon during the campaign in October 1792 to raise the tarif for silk weavers - a proposed 33 percent supplement had the support according to officials of almost 3,000 people "especially many women".  However, in November 1792 the authorities issued an amusingly pious declaration To the men and women citizens of the City of Lyon in which it called on the women to “return to your homes with confidence in your magistrates” and exhorted their menfolk to calm their wives, return them to their household duties and “keep them within the bounds prescribed for them by nature”.

Musee Gadagne - Room labels in English.
http://www.gadagne.musees.lyon.fr/index.php/building_en/Histoire/Ressources/Les-fiches-de-salle2
See: Room 18: The Revolution pike and petition of the people of Lyon (pdf)