Why Fragonard's glorious Progress of love was removed from the walls of the Louveciennes pavilion and paintings by Vien substituted is one of the great unresolved mysteries of art history.  Unfortunately there is almost no documentary evidence and the matter remains a matter of speculation..... 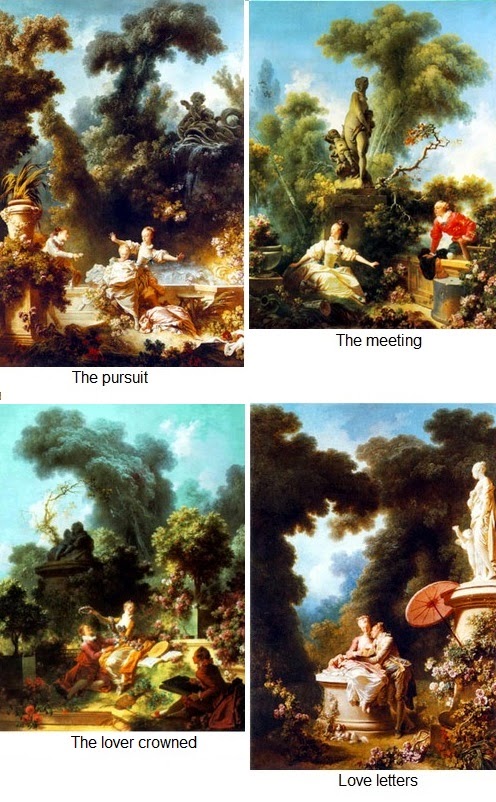 First, what we know of the commission and its circumstances:

For several years in the late 1760s Fragonard exhibited nothing at the Salon and sought to make his reputation mainly through decorative commissions. In June 1770 Madame du Barry bought four overdoors from him through Hubert Drouais for the main château at Louveciennes at a cost of 1,200 livres.  He was subsequently commissioned, for a further 18,000 livres, to paint four canvasses for the new pavilion.  Intended for the salon cul-de-four, these were substantial works, over three metres in height and Fragonard found it convenient to work on them in situ at Louveciennes. Ledoux began work on the pavilion in December 1770, so Fragonard probably received the commission in early 1771.

At the time of the pavilion's inaugural banquet in September 1771 Fragonard's paintings were still in progress or perhaps just getting underway:  in a note of July 20 1772 Pidansat de Mairobert reported on the ceiling of the salon cul-de-four by Restout fils and the "large paintings by Fragonard that unfold on the themes of the Amours of shepherds and seem allegories of the mistress of the place; they are not yet finished." Fragonard was still working at Louveciennes (or at least claiming that he was) as late as March 1773.   At some point after this he was paid off in full and departed with his canvasses. The suggestion is that they remained in their portable frames and were never permanently hung.  Vien may in fact have been commissioned to produce their replacements as early as late 1772 or  early 1773. Fragonard left France for Italy in October 1773.

In 1792 Fragonard installed the paintings in his godfather's house in his native Grasse - now the Museé Fragonard - where they were rediscovered in the late19th century, sold to J. Pierpont Morgan and, on his death in 1914, to Henry Clay Frick.  They now form part of the Frick Collection in New York.


So why did the paintings not remain in the pavilion?  Was the decision Fragonard's or Madame du Barry's?  Here, broadly, are the possibilities that have been considered over the years.


EXPLANATIONS : The prime mover was Fragonard

1. Fragonard (who was quarrelsome) just quarrelled with Madame du Barry, cause unspecified  but probably over the money.

The earliest mention of the paintings' continued existence in Grasse appeared in the Revue universelle des arts for 1858 and states: "The story goes that after the work was finished, the artist and the Countess disagreed on the price. Fragonard therefore went back to Grasse, taking the paintings with him".  The Goncourts, who had been in communication with the current owner, M. Malvilan, wrote simply that,  "As a result of a disagreement with the favourite, the painter had the pictures rolled and later took them to Grasse" (Rosenberg, p.319-22)

This simple explanation has a certain plausibility given Fragnard's track record.  He had earlier been entrusted with, and now similarly abandoned, the decoration of the grand salon of hôtel Guimard, begun by Ledoux in June 1770 and dedicated to the Muse  Terpsichore (personified thoughout by Mlle Guimard). The Correspondance littéraire for March 1773 reported that Fragonard had slipped back into the house and taken the opportunity to paint an angry expression on the fragrant Terpsichore.  According to David, who completed the paintings, Fragonard had agreed to do the work for 6,000 livres, then demanded 20,000, so alarming Mlle Guimard that she renounced the project. (Letter from premier peintre Jean-Baptiste-Marie Pierre to Ledoux, dated 15th November 1773). However, the artist was paid his 18,000 livres in full by Madame du Barry and allowed to keep the paintings, so financial disagreement seems less likely.  Perhaps Fragonard put about this idea to save face?

2. Fragonard found the project too proscriptive, or Madame du Barry too interferring.

This explanation gained ground in the early 20th century as interest in and appreciation of  Fragonard's art grew.  Thus Pierre de Nolhac, J.-H. Fragonard (1910): If Fragonard accepted the general theme (of "young love"), he reserved the right to interpret it after his own fashion.  Claude Saint-Andre, A king's favourite (1915): It could not be that the paintings failed to please the Countess. "Her sure taste .... made her too good a judge of the value of paintings for that; but her mania for criticising and minutely instructing the artists who worked for her, must have wearied Fragonard" (p.191). It is certainly true that Madame du Barry played the art connoisseur and the goldsmith Gouthière, for an instance, submitted to her his detailed designs. But there is absolutely no evidence for her "interference" in Fragonard's work beyond laying down the general theme.  The commission was, after all, taken to virtual completion.


The likely role of Ledoux as architect is worth emphasising. Ledoux was known to  concern himself with the most minute decorative details of his projects, so it seems likely that he and Fragonard, who also worked together on the hôtel Guimard,  were in broad accord on the plan for the salon. The artist would have considered the layout of the room, the source of light and the way his panels would work with Ledoux's decor.  Unfortunately there is no direct evidence of Ledoux's conception beyond Mairobert's description of the ceiling (now lost) as a domelike painting of hazy clouds.  Perhaps the idea was to suggest the illusion of a forest or garden, as at the hôtel Guimard, where Ledoux had chosen green flocked wallpaper to complement Fragonard's art.

Explanations which give to Madame du Barry the initiative seem better grounded.  The favourite was under pressure to establish her role as royal patron and arbiter of taste, and did so under the constant glare of (often adverse) publicity.  The ordering of paintings and sculptures to adorn the pavilion extended over a number of years and she had a track record, if not of detailed interventions, of commissions rejected or relocated. Some paintings - a historical series from the Château de Choisy  - were foisted upon her; others - seascapes of Vernet  and Gobelin tapestries - were the results of personal selection.  Paintings were often moved or installation schemes altered to accommodate new acquisitions. The fact that Vien was commissioned whilst Fragonard was still ostensibly at work, plus the way in which Fragonard was  "paid off"  all point to Madame du Barry's decision.
.
3. Fragonard's paintings were not "neoclassical" and therefore rejected on grounds of fashion / taste

This tended to be the mid-20th century view. See, for instance,  Robert Rosenblum's Transformations in late eighteenth century art (1967 with references to  a 1960 article by Franklin Biebel): Madame du Barry "returned Fragonard's Progress of love series and commissioned Vien to restate the same Rococo theme in a more modish archaeological manner".  She thus  substituted Vien's "classicizing Rococo" for Fragonard's "more conservative Rococo" (p.20)  This was a matter of style rather than substance. Theatrical fantasy gave way to decorous classical drapery, the garden of love was replaced by an Olympian park and archaeological details abounded.

It is sometimes contended that Vien (or the younger David) would have been Ledoux's preferred artist.  But this is to misread Ledoux's classicism, which was less a matter of archaeological vraisemblance than a dream of pure classical form. The pavilion in its garden setting carried with it connotations of the private, of informal pleasure and the free rein of the imagination ( as expressed for example in La petite maison, Jean-François de Bastide's strange novella of 1763) The interplay of the painted interior and external nature, so perfectly encapsulated in Fragonard's art. pervades Ledoux's décor.  Vien's studio-based depictions of trees and foliage are sterile backdrops by comparison.


This is surely closer to the mark.  Madame du Barry's ordering, repositioning and cancellation of works was not always dictated purely by connoisseurship. Propriety was all for a royal mistress, regarded by hostile opinion as little better than a prostitute.  In the Salon of 1771, for instance, the Comtesse had wrong-footed herself badly with Drouais's portrait, Madame du Barry as Muse. Thus Thomas Crow:

"The scale of the thing was probably offensive enough, but the fact that she appeared, in Collé's words, "almost entirely nude" made it the stuff of scandal....This spectacle overshadowed everything else in the Salon.  In the face of the derisive reactions of the crowd witnessed by the comtesse herself on a visit to the exhibition, the picture was withdrawn.  Marigny, in a last show of authority, may have demanded its removal as a defence of decency" [Crow, Painters and public life in 18th-century Paris (1985)]

No wonder Madame du Barry felt nervous about the paintings in the pavilion!  Fragonard's vision, with its Italianate and theatrical setting was inevitably associated - perhaps indeed unfashionably - with dissemblance and moral ambiguity.  The Progress of love could be readily interpreted as a commentary on her affair of  Louis XV, as  Mairobert has it, "allegories of the mistress of the place".  At most basic the figures, in their theatrical costumes, were presumed to be portraits of the couple. Pierre de Nolhac supposed that the lover in The pursuit resembled the King, but that Madame du Barry "imposed her views on the painter" who changed the features of the young man from the second canvas onwards. Perhaps, he speculates, Madame du Barry herself is the young girl on the gazon.  In fact the paintings are not now thought to be portraits at all; in each picture the individuals are different.


Perhaps, however, some analogy was intended.  The paintings are identified in an inventory at Louveciennes dated 1st May 1772 as "the four ages of love".  Colin Bailey, the curator at the Frick Collection, has recently emphasised this idea of sequence, recreating the hanging scheme and suggesting the order the paintings should be "read". He sees the last painting, Love letters, as the resolution of erotic love into friendship, a familiar 18th-century aspiration and a  seemly one for Madame du Barry and the aging Louis. Bailey is probably right but his interpretation has not been universally accepted. Other critics favour a more fluid approach. Fragonard himself did not adhere strictly to the order at Grasse and added two other canvasses, Love triumphant and The reverie, the latter a languid and particularly erotically charged depiction of abandonment to desire.


Vien's cycle, similarly themed The progress of love, is altogether more explicit in depicting the respectable development of love. His first painting shows an Oath of feminine friendship; in the second the two women encounter Cupid in the form of a sleeping infant;  in the third, a male lover crowns his mistress; in the fourth the lovers unite conventionally before the altar of Hymen.

IVien's pictures are just much less sexy. In Fragonard, even the statues in the garden are cheekily provocative and the vegetation is both out of control and saturated with fecund desire.  In contrast, after viewing Vien's Greek maidens, Diderot is said to have remarked that they induced "no desire to be their lover, only their father or brother".  By commissioning the fifty-five year old Vien, Madame du Barry placed her theme in safe hands; fashionably classical, his treatment was remote from the present and altogether less problematic for a royal mistress than Fragonard's effusions. 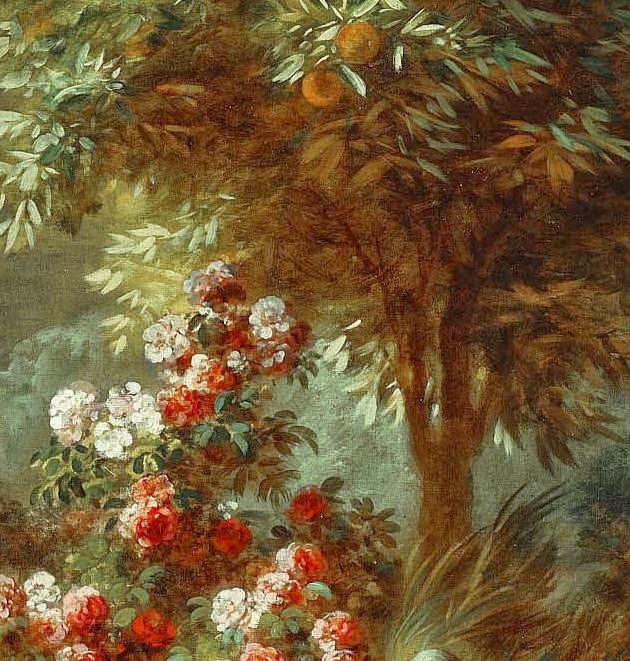 Colin Bailey's book is not available on the internet, but he explains his views on the positioning and themes of the paintings very clearly in the video below: