Here is a vintage postcard of the Marat montage from Madame Tussaud's Parisian rival, the Musée Grévin -  yes,THEY have the tub! (or so the story goes....) 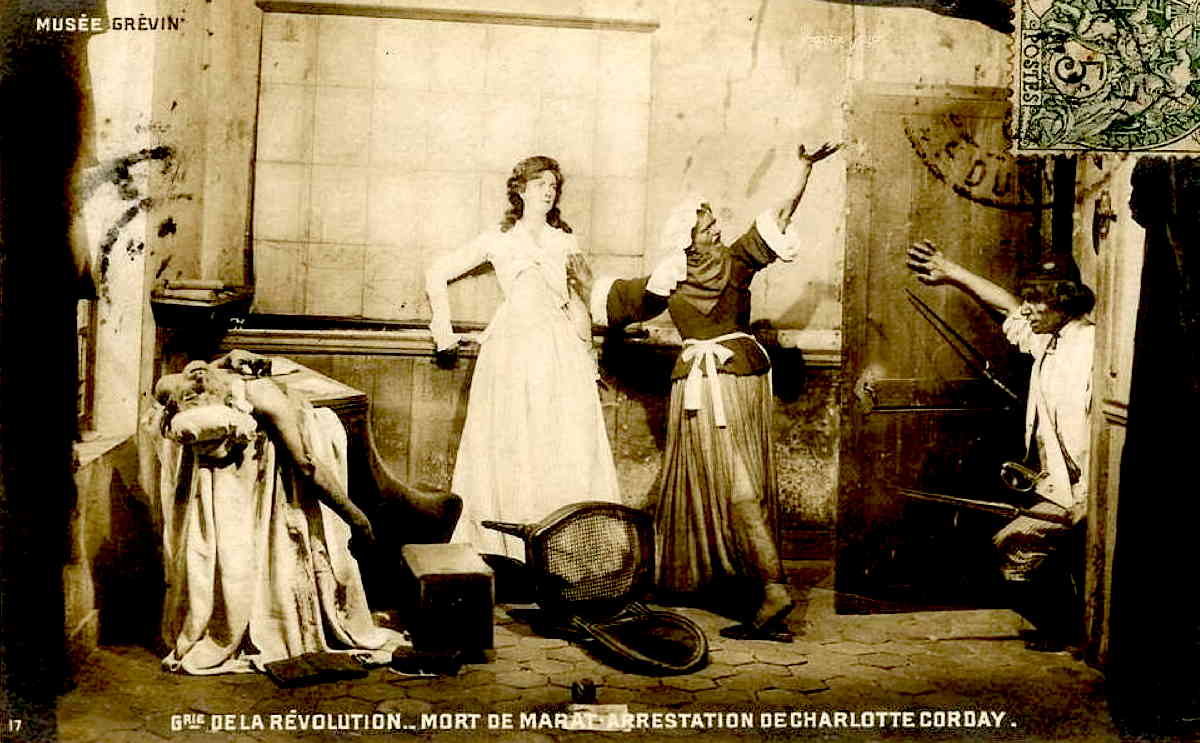 The bath caused a minor sensation in July 1885 when Le Figaro tracked down its then possessor, a curé called Father Rio from the little town of Sarzeau in the department of  Morbihan in Brittany. The curé had inherited it long ago in 1862 from an ancient and staunchly royalist parishioner, one Mlle Capriol de Saint-Hilaire and had stored it in the refectory attic, more recently in an outhouse. He now realised that selling the tub could earn money for his parish, but the Musée Carnavalet turned it down due to its high price and lack of provenance.  Madame Tussaud's subsequently agreed to purchase it for Fr 100,000 but  unfortunately the curé's acceptance was lost in the post.   After rejecting other offers, including one from Phineas Barnum, he finally sold the tub for Fr 5,000 to Gabriel Thomas, president of the  Musée Grévin, where it remains to this day...

An iconic object, but is it real?

Republican opinion at the time was sceptical but the Figaro journalist championed the authenticity of the treasure, which Mlle Capriol de Saint-Hilaire's father had purchased from a Parisian scrap metal merchant in the the rue d'Argenteuil as long ago as 1805.

Unfortunately, the fate of the bath between Marat's assassination in 1793 and its supposed rediscovery in 1805 is to say the least uncertain . Immediately after Marat's death, the Justice of the Peace for the Théâtre-Français Section placed seals on Marat's  possessions and recorded a detailed inventory which did not include the bath.  It was, however, displayed prominently, together with Marat's bloody shirt, in the Church of the Cordeliers where the body lay in state immediately prior to his funeral on 16th July.  Both are clearly visible in the painting above (with, I think Marat's table and inkstand?).


It also later featured in the monument erected to his memory in the Place du Carrousel on 18th August, a wooden pyramide gothique which again contained not only the bath itself (presumably the real article) but also Marat's desk and ink stand.  Lit by a lamp, the interior of the pyramid with these relics could be seen through an iron grille.

Was the bath spared from destruction in February 1795 when the Convention ordered the demolition of this  monstrosity? Maybe so, but if it was rescued and resold, no-one was saying.

Notice from the website of the Musée Grévin https://www.grevin.com/en/jean-paul-marat

"The bath of Marat"  in Lenotre Paris in the Revolution (English translation) p.201-205
http://archive.org/stream/parisinrevolutio00lenouoft#page/200/mode/2up

There is a curious muddle concerning the bath's whereabouts immediately after Marat's death. One version originates with Teresa Ransom's book Madame Tussaud (2003), cited by Wikipedia, and therefore repeated on a trillion other internet sites.  Ransom agrees that the bath was not in the inventory of Marat's possessions taken after his death.  However, according to an "interesting story of 1885" it is now "almost certain" that his widow Simonne Evrard sold it to a neighbour who was a journalist:

"Some years later it was rediscovered by a Justice of the Peace when he was called to an apartment in the rue de l'Ecole de Médecine, next door to the one formerly lived in by Marat.  Following the death of the apartment's owner, the journalist, the Justice of the Peace had to make an inventory of the contents before placing seals on the doors.  Among the items listed in the inventory were a library of books, two spheres, an old box, a surgeon's instrument and, of special note, the bath" (Ransom, p.252).


This sounds suspiciously like a garbled version of Lenotre's text:

"On the day following Marat's death, the justice of the peace of the Theatre-Francais section, after affixing the seals in the apartment of the terrible publicist, proceeded to the inventory of his furniture. Among the objects which appear in this inventory, which is very detailed, are, " a library, two globes and a box containing a surgical instrument," but there is no mention of a bath. Marat confined himself, without doubt, to sending for one from the nearest person who hired such things out, when he felt the need of taking a bath. It is quite possible that the hirer kept, after having taken it back from Marat's house, the bath in which the " Friend of the People " had died.Then it would have shared the fate of all things,and have been sold as scrap-iron" (p.203-4)

There is no need to imagine a journalist neighbour: the "terrible publicist" is Marat himself and the inventory items are clearly his (though without the bath). In some of the newer versions, the (imaginary?) journalist even becomes the bath's purchaser, M. de Saint-Hilaire himself....How myths are made in the age of the internet!