Myths of the Bastille: the legendary escape of Latude 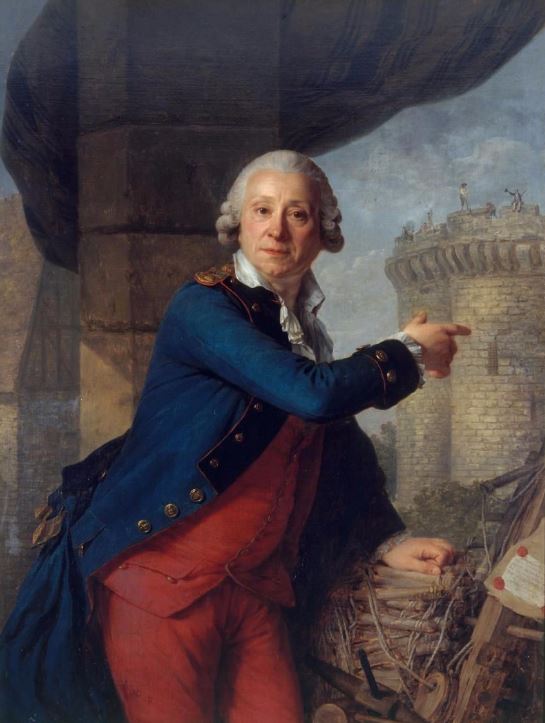 Also newly rehung at the Carnavalet is this splendid portrait by Antoine Vestier of Henri Masers de Latude, hero of a legendary escape from the Bastille.  The painting was completed in double-quick time following the fall of the Bastille and was exhibited to universal admiration in the Salon of 1789. Despite having spent much of his adult life detained in the most notorious prisons of the ancien regime, Latude looks remarkably youthful as he rides high on the crest of public adulation.  He stares out proudly at posterity, one hand on the rope ladder he used in his escape, the other pointing at the demolition crew already hard at work on the fortress. The ladder itself, now unravelled and elaborately conserved, is on show next to the painting.

The considerable amount of documentation relating to Latude's career is conserved in the Archives of the Bastille at the Bibliothèque de l'Arsenal. Bundle 11693 includes manuscripts theatrically written by Latude in his own blood on cloth torn from a shirt  (exhibited in the Bastille ou l'enfer des vivants exhibition in November 2010-February 2011).

Escape from the Bastille, with its towers, great walls and moat, was a rare event indeed.  In the three and a half centuries of its existence, despite 6,000 imprisonments, the prison suffered only seven escapes, the last before Latude taking place in 1709.

Born in 1725 in Montagnac in Languedoc, Latude - in those days just plain Jean Danry - was the illegitimate son of a laundress and an impoverished nobleman.  As a youth he had served with the Army as an assistant surgeon  (in effect a barber), but in 1749, found himself destitute in Paris.  It was at this point that he hit upon a crazy and ill-advised scheme to gain favour by disclosing a imaginary assassination plot against the Marquise de Pompadour.  He sent her a booby-trapped parcel containing poison (in fact a harmless vitriol) which he  naively addressed in his own undisguised handwriting.  The parcel was duly intercepted, the deception unravelled, and Danry founded himself arrested and incarcerated first in the Bastille, then at Vincennes.  In the charged atmosphere of the time, the mere suggestion of lèse-majesté was enough to ensure his long imprisonment.  In June 1750  Danry made his first escape by giving his guards at Vincennes the slip and absconding through an opportune unlocked door. On this occasion he was recovered from an inn where he was staying after a mere five days. 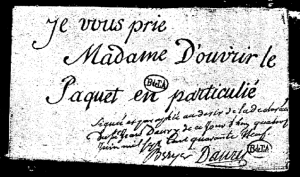 Back in the Bastille, Latude could now only expect severe treatment.  He spent eighteen months chained up in a dungeon, but was finally allowed back into the main prison where he shared a room in the Comte tower with an equally desperate young man named Antoine Allegre.  In the winter of 1754-5 the two planned their escape. The rooms in which the prisoners were confined were arranged, one per floor, in each of the eight towers of the old fortress.  The walls were six feet thick, with only a grill to let in a chink of light.  An immense chimney over the fireplace, spiked with metal gratings and bars, went up 9 metres to a platform from which there was a 25-metre drop into the moat, to say nothing of the imposing outer walls of the bastion.  The prisoners first loosen a tile from the floor using pins from a folding table and two cylindrical lighters, to reveal an empty space which could be used as a hiding place.  They then about the huge task of tearing out the gratings and bars preventing access to the chimney. They spent hours scraping with makeshift tools and blowing water from their mouths onto the cement to soften it. They also had to construct a rope ladder for the chimney, plus another to get down from the towers, plus a wooden ladder to scale the outside wall. The labour took  eighteen months.  They were first able to escape out onto the platform where they secured pieces of iron fromgun carriages and even a mallet and drill that had been left overnight.  The first rope ladder was made from twisted threads unravelled from shirts and handkerchiefs and all manner of linens.  The two men spent the winter of 1754-5 demanding more and more clothing;  the commissioner of the Bastille obligingly had two dozen shirts and the same quantity of handkerchiefs made for Latude at the King's expense.  For the outer walls, they constructed a ladder with no less than 151 rungs, each laboriously created from fire logs using a home-made saw.  They decided to avoid the dangerous route through the governor's garden by boring a hole directly through the wall of the moat to the Saint-Antoine gate.  At one point in October 1755 they were sent into panic when it was announced that they were to be transferred to another room so that repairs could be made to their cell. They spent three tense months, then were moved back to find the ceiling repaired and their escape equipment under the floor intact .  They finally made their successful bid for freedom  on the night of 25 February 1755.

Sadly for Latude his ingenuity and determination in absconding was not matched in his subsequent movements.  He was eventually picked up in Amsterdam after just three-and-a-half months of freedom and on 15 June 1756 found himself back in the Bastille. Confined to a dungeon, he continued to write obsessively, working on various wild engineering schemes which he hoped would earn his release. In 1759 Sartine returned him to a room in the Comte tower. Following the death of Madame de Pompadour it was decided that he should be transferred in Vincennes and "left in oblivion".  Here he escaped for a third time, absconding from his guards in a thick fog.  This time he did not even attempt to flee but demanded an audience with the duc de Choiseul and was promptly reincarcerated.  He was now held in the castle keep of Vincennes and from September 1775 in the asylum at Charenton.  In 1777 he was actually liberated but importuned the King's ministers at Versailles to such an extent that he was rearrested and sent finally to Bicêtre, where he was held in miserable conditions, suffering from rheumatism and scurvy.


Latude becomes a hero of the Revolution

On a winter day in 1781, a  knitwear trader called Madame Legros  found a package with an unreadable address in the street and opened it.  Inside she discovered a letter from one “Masers de Latude, prisoner for thirty-two years at the Bastille, at Vincennes and now at Bicêtre, on bread and water, in a cell 10 feet underground”, whch contained a plea for mercy obviously addressed to the King.  Madame Legros was so deeply moved that she spent  three years campaigning determinedly and at great financial sacrifice for Latude’s release.   She circulated copies of his letter, persuaded two attorneys, Lacroix and Comeyras, to act on his behalf and even managed to interest influential members of the nobility, notably Voltaire's former host the Marquis de Villette.  In 1784 Latude’s release was finally secured -  the Académie française even awarded Madame Legros its  newly inaugurated prize ” for virtue” in recognition of her efforts.  In 1787 an illegally published set of memoirs (by the Marquis Beaupoil de Saint-Aulaire) connected Latude’s story to a scathing attack on the lettres de cachet and the justice system in general.  Hundreds of visitors now came to his Paris apartment, sent him money, and listened to him recount his experiences.

After the Revolution Latude seized his chance to publish his own account and to attempt to gain compensation for his sufferings.  His capacity for showmanship matched that of the master publicist Palloy; in fact there is every reason to infer that the two were in collusion The very day after the fall of the Bastille Latude was apparently to be seen clambering down into the dungeons where, with the aid of Palloy’s workers, he opportunely rediscovered the instruments he had used in his escape attempt concealed behind a trap-door in the former Archives room. In particular he found the 180-foot-long rope ladder he had used to scale the ramparts.  Latude and his effects were carried off to the Hôtel de Ville, where he was warmly received; and the artifacts duly restored to his custody.

Several weeks later in August and September 1789, Latude published the first of his Memoirs which reproduced his petitions to Madame de Pompadour and to Sartine and gave an account of his sensational escape through the chimney and over the tower walls of the Bastille.  Already well known in enlightened circles, Latude now became, for a short time, a national hero. The famous painting by Vestier, created in August 1789, was reproduced in a number of engravings, with suitably mawkish patriotic verses eulogising Latude courageous reconquest of liberty.  The painting itself was displayed in the Autumn Salon at the Louvre. In the course of 1790 the ladder was exhibited at innumerable markets throughout France and England though the former prisoner himself declined to take part in the tour because of his advanced age.  A miniature of Latude’s rope ladder and the inscription “Replica of the self-made ladder with which M. de Latude escaped the Bastille” was included with the models of the Bastille which Palloy began to send out to the departments in November 1790.  In July 1790 the Jacobin Club elected Latude one of their members by acclamation. Madame Legros received a further honour,  the “citizen’s crown”, which was  solemnly presented to her by a delegation of twelve.

Latude’s biography,  published by his lawyer Thiery in 1790, was a Revolutionary best-seller with more than twenty editions – despite its 500 pages.  Copies were sent out by Palloy with his stones.  The work is carefully crafted. Latude concealed his meagre schooling and early years as an assistant surgeon by fabricating for himself a refined education as an engineer. He also glossed over the discreditable circumstances of his imprisonment  by inferring a genuine plot against Madame de Pompadour.   He dwelled in suitably Gothic prose on the horrible conditions of his imprisonment and his cruel persecution by La Pompadour, and the lieutenants Sartine and Le Noir.  For thirty-five years he had “vainly belaboured these infernal vaults with my sighs and my despair”, weighed down by chains, gnawed by vermin, breathing only putrid air...

Latude appeared before the Assembly twice, in May 1790 and January 1792, to petition for a state pension.  On the first occasion his request was denied due to the ambiguity of his crime but on the second occasion he was received with applause by the members of the Legislative.  The deputy Lasource emotionally recalled  the passage from the memoirs in which he recounted how he had continued to write with his own blood on cloth rags when deprived of paper and ink by the governor of the Bastille.  On 10th August when the statue of Louis XV on the Place de la Révolution was torn down, he was presented at his own request with the King's bronze right hand.  In addition to the pension in 1793 he also finally received damages to the considerable sum of sixty thousand livres from the heirs of the Marquise de Pompadour.  He lived on until 1805, continuing to play the role of martyred hero to the last.

The classic account of Latude's exploits is Legends of the Bastille by Frantz Funck-Brentano, with an Introduction by Victorien Sardou, Authorised Translation by George Maidment, London :  Downey & Co. Limited; 1899; pp. 168-237.
http://www.elfinspell.com/France/LegendsOfTheBastille/Chapter6-Latude.html


Claude Quétel, Escape from the Bastille:  the life and legend of Latude (English trans. Polity Press 1990)

Hans-Jürgen Lüsebrink and Rolf Reichardt, The Bastille: a history of a symbol of despotism and freedom (1997) p.112-8.