Here are two anonymous oil paintings from the Museum at Port-Royal des Champs which depict significant episodes from the infamous destruction of the Abbey and its community of nuns. I can't find the exact provenance, although they are listed as part of the Port-Royal collection by the 1840s.


The dispersal of the nuns of Port-Royal


On 26th October 1709 the Council of State issued an arrêt ordering the arrest and dispersal of  the nuns of Port-Royal des Champs.  Three days later, at 7.30 in the morning, as the sisters came from mass, the lieutenant-general of police, d'Argenson, accompanied by three police officers and an armed force of no less that three hundred archers, appeared at the gate of the convent.  He brought with him blank lettres de cachet, one for each of the fifteen nuns and seven postulates.  When the prioress Mother Du Mesnil opened only the grille in the door, he grew angry at this disrespect shown to a royal minister. The prioress would not fill in the arrest warrants  and refused to recognise the Council's orders without a copy of the proceedings.

D'Argenson was now forced to resort to an ultimatum.  The nuns were gathered together in the chapterhouse and given three hours to pack and board one of twelve carriages which awaited them in the courtyard.  Whilst they ate a last meal together and gathered their few belongings,  police officers collected the convent's manuscripts and records, a process which took much longer than d'Argenson expected.  Hours passed and it was not until five in the afternoon that the heavily loaded carriages, accompanied by the archers, set off from Port-Royal de Paris. 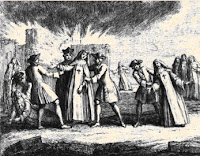 In the end the dispersal of the community and the destruction of the Convent was to take over a year to complete. The lettres de cachet  were filled in;  Louis XIV had ordered the nuns to be separated and sent to a variety of different houses throughout northern France.  They were to be treated with kindness, but stern regulations were put in place to prevent them  influencing their new sisters or communicating with the outside world.  They were required to sign the Formulary "purely and simply" which, with the exception of Mother Du Mesnil, they did.   After the death of Louis XIV the twelve surviving nuns were allowed to return to Paris where Noailles placed them in convents within the capital.  The last of them died in 1738.


Destruction of the Abbey Church and exhumations


It took several weeks to confiscate the accumulated treasures of the community and convey the contents of the amply stocked storehouses to the Abbey of Port-Royal in Paris. On 22 January 1710 an arrêt of the Conseil d'État ordered the demolition of all the buildings belonging to the convent.  As was the custom the work was offered "en adjudication", that is bids were invited for the materials and the successful applicant was then responsible for the demolition and clearance. In June 1710 the wrecking crews finally moved in, demolishing the convent, guest house, barns and outbuildings. The farm, with its dovecote and mill, was left as a going concern. Originally, the destruction of the Abbey church was not envisaged; the Arrêt made provision for a chaplain to be lodged at the site.  However, the community in Paris was reluctant to take on the expense and, in an ordinance dated 29th December 1710 Cardinal Noailles sanctioned the complete destruction of the church and its precinct, which entailed the removal of all bodies buried there.  The exhumations were delayed until the initial demolition was completed;  a further arrêt authorising the work was finally issued on the 16th November 1711, with the exhumations taking place in November and December 1711.  The Abbey church was dismantled between September 2012 and Spring 2013, when the last remains were razed to the ground using gunpowder.


The exhumations entailed the removal of all cadavers which lay within the Abbey precinct - under the floor of the church, in the cemetery of the community within the cloister, and in the cemetery for servants and lay faithful, which was situated outside the north wall of the nave, near the main public entrance in the north transept - several prominent figures, including Racine, had elected to be buried in this latter as a mark of humility.  Not all the remains disinterred were necessarily recent burials, though the total of 3,000 bodies often quoted is based on an extrapolation and almost certainly a wild exaggeration  Several commentators noted that no individuals were identified from burials in the church before 1652, when the floor had been raised several feet to counter-act the damp; the hurried and slipshod way the work was carried out made it likely that the earlier corpses remained in situ. This supposition was corroborated when at the end of 1712 the spire of the bell tower toppled to expose the undisturbed body of an ancient priest with a wooden cross folded into his habit.

Thanks to the intervention of the marquis de Pomponne, the remains of six members of the Arnauld family had already been disinterred and transported to the church at Palaiseau as early as September 1710. Other prominent individuals -  the duchesse de Longeville, the princesse de Conti, Lemaistre de Sacy,  Jean Racine, were also successfully exhumed and moved elsewhere.  On archiepiscopal authority four lead lined coffins and sixteen hearts from inside the Abbey were  transported to the local parish church at  Magny-les -Hameaux.  The curé of the time, M. Avril (or Auvril), whose brother was Jesuit, was reluctant to receive them, but finally allowed them to be reburied in the Chapel of the Virgin. The rest of the remains, however, were unceremoniously dismembered, packed into boxes and taken the nearly cemetery at Saint-Lambert des Bois, where they were buried in a communal grave.
Later Jansenists were naturally inclined to emphasise the extent of the desecration, but by any standards, the exhumations represented a gruesome undertaking  - a horror made worse, commentators observed,because it took place in the midst of "the most humane and best policed of nations". Le Doux , vicaire of Saint-Nicolas-du-Chardonnet  who was appointed by Noailles to oversee the work, was unsupported and by all accounts proved unequal to the task; he was understandably reluctant to leave his lodge and, when opportunity afforded, hastily retreated back to Paris. The workmen, left to their own devices, equally understandably took refuge in drunken bravado.  A letter published in February 1712 reports the account of two Chasseurs, from Versailles who took it into their heads to go and visit the Abbey. They were shocked to find men digging up corpses, some of which were only half decomposed, and dumping them willy-nilly in a pile in the church. The bodies of nuns were snatched indecently from the earth, some still in their habits. Those that could not be lifted whole, were simply hacked to pieces. The workmen, who were completely unsupervised,  were drinking, laughing and uttering profanities. Worst of all were the dogs in the church who were allowed to devour the remaining  pieces of flesh and gnaw at the bones without anyone troubling to chase them off.  One labourer from Magny who was still living in 1754, observed that he could have "learned anatomy" from his work.  Another witness, claimed that the diggers deliberately broke up bodies in order to carry them by horse and pannier to the pile in the church.  To add to the horrors recent burials were found intact:  the last abbess Élisabeth de Sainte-Anne Boulard de Denainviliers, who had died only in 1706, appeared "as though asleep"; the men themselves recognised several bodies, including that of a pious domestic called Jean Laisne who had died only in February 1709.

The carts which transported the remains to Saint-Lambert were said to be so overloaded that the gore spilled out and had be buried at the roadside by passersbys. Afterwards only four corner stones marked the site of the square pit  - the so-called carré de Port-Royal - which had been dug to receive them. The modern memorial in the little churchyard reads simply:

Here were buried after having been transported by carts, the remains of the Nuns and Solitaries who lay at Port-Royal des Champs.  January 1712.  Pater dimitte illis