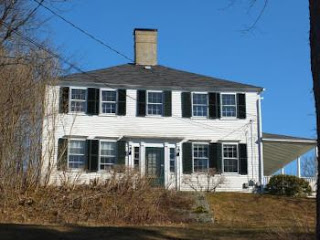 This two-storey colonial house on the wind-swept shore of the river Sheepscot in Edgecomb, near Wiscasset, the county town of Lincoln County, Maine, is known locally as the "Marie-Antoinette House".  Today it is the property of the historical crime writer Lea Watts.  According to legend, its owner Captain Samuel Clough was involved in an abortive plot to rescue Marie-Antoinette from France and at one time intended his house as a temporary  place of exile for the French queen.
The Decker-Clough Estate

Old Capt. Decker built a fine and spacious mansion, regarded in those times as a palace. It was really a plain two-story structure, clapboarded, and square, with one huge chimney rising from the center of the building. (Small (1894), p. 39) 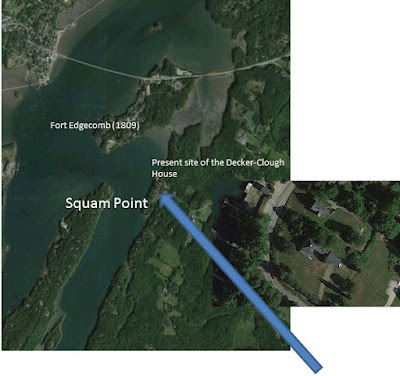 The house was built in 1774 for Joseph Decker, a shipwright involved in the transatlantic "spar and salt" trade, one of the earliest commercial developments along the Sheepscot river;  vessels were built on the Maine shores and crossed the Atlantic with lumber to be discharged at foreign ports and were reloaded with salt. The Decker estate, constructed in 1744 on the site of an old Indian trading station,  was located at the northern end of Jeremy Squam Island (now Westport Island).  It was equipped with wharves and warehouses for the storage of logs and salt. The house itself stood here until 1838 when it was bought by a local Edgecomb merchant who had it ferried across the river on flatboats then drawn uphill by a team of oxen to its present site.  On his death in 1792 Decker's son-in-law Samuel Clough (1761-1818) bought the titles and succeeded to the Decker homestead and business.  Clough's ship, the Sally - named for his wife -  was a three-masted vessel of 82-feet, built in Bristol, Maine in 1791.  It was originally registered to Decker, Clough and Matthew Bridge, a merchant from Charlestown Massachusetts.   In 1793 it is recorded as registered to Clough alone. The ship is said to have made several trips to Le Havre prior to 1793.[see Cayford (1984)]


There is little information to be had about Clough's business as the records have been destroyed;  according to Lea Watts, the wife of one of Clough's descendants, tired of persistent questioning about the "Marie-Antoinette House", had her grandson dump all the family papers and ships' logs into the river.  He filled his skiff twice and the documents were lost forever.  It is known that in the mid-1790s Clough was involved in the French trade of the wealthy Boston merchant, James Swan(1754-1831).  Clough was Swan's Wiscasset operator, working  through his agent in Boston General Henry Jackson, who owned vast woodlands in the area which supplied lumber for shipment.


James Swan and the trade with France

A veteran of the Boston Tea Party and former artillery colonel, Swan was on close terms with both Henry Knox, Washington and Lafayette. After the depression of 1786, he made a fortune supplying raw materials to the French army.  In 1794 he was appointed as the United States agent for the Revolutionary Commission du commerce et approvisionements, with his partner a Swiss banker,  Johann-Caspar Schweizer. His headquarters for the next few years were in Philadelphia.  Swan shipped staples for the French army  - wheat, rice, beans, saltpeter and lumber from Wiscasset.  In return - since the French Republic could not  afford to export specie or draw on foreign credit -  he received payment in kind.  A series of memoranda drawn up by Swan in the winter of 1793,  specified the luxury merchandise which could be resold on the American market  - furniture, mirrors, clocks, luxury textiles and fine wines.  A record of 8 thermidor, Year 2 (July 26th 1794) mentions receipt by Swan and his partners of £30,000 worth of "luxury objects chosen by Swan and Company". This was the time of the major Versailles sales and many objects from the former royal collections are known to have passed through the hands Commission agents such as Chapeaurouge in Hamburg.  In 1795 advertisements for French furniture began to appear in the Boston Chronicle.  Certain articles also found their way to the Swan mansion in Dorchester, notably a suite of bedroom furniture  made in 1787 for the director of the Garde-Meuble Marc-Antoine Thierry de Ville d'Avray (now in the Boston Museum of Fine Arts).  Some of this furniture is known to have been shipped by Clough.

There is little evidence regarding Clough's supposed involvement with Marie-Antoinette.  "Family tradition" confirmed only that the Captain was in France for three years, that he helped exiles and refugees save their treasures, and once came close to losing his life (?how). [See, Sewall (1894)  p.298, citing a letter from Clough's grandson  Jonathan Edward Adams (1822 - 1901)].  The family owned a fragment of white material, said to be the death robe of Marie Antoinette with a handwritten legend inscribed within a knotted loop of its trimmings: This was taken from the dress which Queen Marie Antoinette wore at her execution, by an eye witness, Captain Stephen Clough [Sewall, p.293]. In principle, the dates the fit: it is probable that the Sally docked in Le Havre in the summer of 1792 and was delayed by French customs.


Clough's romantic regard for the French Queen was said to be so great that he named his youngest daughter Antoinette after her. This is easily verifiable. Clough's third daughter was indeed Hannah Antoinette, born 19th January 1798.  The name Antoinette remained in the family for several generations.

Was there a rescue plot?

In one old newspaper article, Clough is remembered saying that he would have risked much for the queen if he had not been a married man.  But sadly there is no evidence that he was ever involved in an actual rescue attempt. Apart from family tradition, the only authority mentioned is "the sailors of Woolwich and Edgecomb" whose suspicions were no doubt aroused by the shipments of émigré goods that passed through their hands.

A few hypotheses put forward are worth considering:

1. Clough acted in concert with a Frenchman called Bennette Claude Merlino de Saint Pry:  "Capt. Clough was hand in hand with Bennete Claud de St. Pyr, a trusted officer of Lyons, and between them it was known, they hatched up the pretty plot to rescue the imprisoned queen" [Undated article from the Portland Evening News, cited by Small, p.39].

Bennette Claude Merlino de Saint Pry was a Boston merchant, originally from Lyon, who ran a salt works on Squam Point adjacent to the Decker estate from about 1771 to 1782, and was rumoured to be in the pay of the French government during the American Revolutionary War. Sadly the dates don't fit: Saint Pry returned to France in 1783 and died soon afterwards, probably in 1785.
See "Bennette Claude Merlino de Saint Pry papers",  Harvard University Library.
http://oasis.lib.harvard.edu/oasis/deliver/~hou02518

2. Clough's daughter, who sailed with him, entered the Conciergerie to make contact with Marie-Antoinette.  This is just nonsense - Clough's eldest daughter Sarah was born in 1790, so would have been three years old at the time.  The story, together with several other implausible embellishments,  originates from the 1910 novel A Royal tragedy by Nat. Wilder  -"a contender for one of the worst historical novels of all times", says Lea Watts.

3. Clough was involved with the Carnation Plot of September 1793. The documentation contradicts this:  Rougemont's rescue plan did not involve sailing to America;  Marie-Antoinette was to be taken to the Château de Livry and thence make a dash for the German border.

4. Clough acted in concert with Talleyrand, whom he probably transported back to Wiscasset in 1794 on the ship which carried Marie-Antoinette's treasures. Sewall (1894) supplies the itinerary:
In the early part of 1794 Talleyrand...landed from a ship in Wiscasset, took letters there to a Colonel North of Augusta, traveled overland to the Kennebec, tarried in Dresden with High Sheriff Bridge, visited in Hallowell and other places, supposed to have been at General Knox's of Thomaston, and then after that went to the seat of government at Philadelphia  (p.299)
Despite the circumstantial detail, Talleyrand sailed to America in  April 1794 not from France but from London, aboard a ship called the William Penn. Maybe these episodes belong to a later point in his sejourn?

5. James Swan was somehow involved - unlikely for a merchant whose business depended on impeccable republican credentials.  Tellingly, the beautiful Swan mansion in Dorchester was also known as the "Marie-Antoinette House"; Swan was said to have owned ."a wonderful bedstead which was always known as the Marie-Antoinette bed" - no doubt in reality the one which had belonged to Thierry de Ville d'Avray.

The treasures of the Marie-Antoinette house

It seems likely that the contents of the "Marie-Antoinette House" were not acquired for the exiled queen's comfort at all but were simply the payment for the charter of Clough's ship. They consisted mostly of domestic furnishings, "tapestries, marquetry, silverware, rare vases, clocks, costly furniture", and fine textiles. There was even a robe thought to belong to Louis XVI himself, which Mrs Clough had cut down to make a gown. According to Clough's grandson most of the furniture subsequently passed to Judge Silas Lee, a prominent figure in Wiscasset society; a clock went to a member of Mrs Lee's family in Washington. (Sewall, p.298).  According to a newspaper article of 1917, a clock, possibly the same one, was found to contain a plate inscribed "presented to Queen Marie Antoinette on the occasion of the birth of the Dauphin".  The more substantial items in Clough's cargo were no doubt sold on in Boston  or, in some cases, passed into the collections of Swan and Henry Knox. One of the few pieces identified as shipped by Clough is a sideboard which once belonged to James Swan Junior,  now in the Boston Museum of Fine Art.


The ghost of Marie-Antoinette

The house may not have been furnished for a royal fugitive, but that has not deterred the ghost of Marie-Antoinette from haunting it!  One book even has a picture....

Article by "the Saunterer" from the  Portland Evening Post, reproduced in H.W. Small, History of Swan's Island, 1933, p.39ff. See (p. for the mention of  Bennette de Saint Pry)
http://www.swansisland.org/swan.pdf

Notice for the sideboard which belonged to James Swan jr., Boston Museum of Fine Arts
http://www.mfa.org/collections/object/sideboard-272208