"For several years he has shown the Royal Family, several foreign princes, and almost all the famous people of our times". Almanach de Palais-Royal 1785

The waxworks cabinets of Curtius, particularly the Salon de cire in the Palais-Royal, specialised in effigies of Royalty  "and almost all the famous people of our times".  A conspicuous feature of Curtius’s exhibition in its heyday was its constant change - indeed, the rapid transformation of his models,  sometimes with only a cursory redistribution of props, was the source of much ironic amusement. Nonetheless, a sense of the emerging concept of “celebrity” is evident  in the mix of court figures, philosophers, actors and popular heroes like Blanchard the first man to cross the Channel in a balloon.

Here are a few of the attested waxworks from the pre-Revolutionary period:

1. "Royal family and several foreign princes"
The Grand couvert à Versailles, a depiction of the weekly ritual appearance of the Royal family at dinner, was the most enduring and consistently remarked upon of Curtius's tableaux. The royal family "seated at an artificial banquet" is mentioned by Mercier as among the models at the boulevard du Temple in 1782.  The piece was subsequently transferred or reproduced for the Salon de cire in the Palais-Royal, where it was the centralpiece and main attraction. The group included the figure of the Emperor Joseph II who visited Versailles in the summer of 1777.  In February 1784 the English visitor Mrs Cradock saw the King, Queen and Dauphin "beneath a canopy" at the waxworks in the Foire Saint-Germain; in July she partook of ices in the Palais-Royal and visited the Salon de cire  where she describes the famous Grand couvert - "the King, Queen and the whole Royal family seated at a ceremonial meal".  She observed that the King of Sweden (sic) remained standing because he was travelling incognito.  Mrs Cradock was also very impressed by the model of Frederick the Great: "All the busts were very good likenesses, but that of the king of Prussia, surpassed all one could have hoped for;  you would have thought that it was actually living" [Journal de Madame Cradock (edited 1896),  p.5-6; 59-60; see  Pilbeam, Madame Tussaud, p.25-6.]
.

Though the diners changed, the Grand couvert remained on show in the boulevard du Temple into the 1830s.  The Romance of Madame Tussaud identifies the London Royal family as a different tableau, depicting the seated figures of Louis XVI, Marie-Antoinette and their two children in full-dress court costume (p.33-4). According to the Tussaud catalogue this version dated from 1790; it is certainly later than 1789, since the "Dauphin" represented is Louis-Charles.

As is often observed, Curtius's depiction of Royalty represented a significant erosion of the boundary between public and private. The Grand couvert, in real life a carefully orchestrated and controlled Royal appearance, was made visible, at least in effigy,  to the ice-eating pleasure-seekers of the Palais-Royal. According to Kate Berridge, Curtius went further than this and also exhibited a tableau of Marie-Antoinette preparing for bed,  turning the Queen, "into a fantasy boudoir femme fatale" (Berridge Waxing mythical, p.74-5)   Certainly, the exhibition testified to the Queen's transformation into a fashion icon:  the figure of Marie-Antoinette sported a replica gown made by the royal dressmaker Rose Bertin herself (In 1838 Madame Tussaud noted the insurance value of her genuine Bertin dress as £22: see Pilbeam, Madame Tussaud, p.124).

The Tussaud memoirs perpetrated the myth of willing collusion, insisting that members of the royal family themselves "submitted to Madame Tussaud, whilst she took models from them".I n hindsight, the  duc d'Orléans may be judged to have played a dangerous game by openly patronising Curtius. He gave him the official title of his painter and sculptor and in January 1785 took sons to see exhibition, where they were represented in effigy, though with "not very much resemblance" (Hubert La Marle Philippe Egalité (1989), p.64).


2. Warriors, statesmen and heroes of the American War of Independence 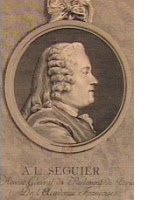 During the American War a French expeditionary force had been sent to the aid of Haider ("Hyder") Ali, ruler of Mysore; he was widely rumoured to have met with the French admiral Suffren to discuss a coalition against the British. In 1788 Haider's son Tipu Sultan sent three ambassadors to France to pursue the prospect of an alliance and to further commerical ties. They stayed for three months and were widely seen in Paris, where they were a source of great fascination.  Their visit spawned large quantities of merchandise, from prints and portrait busts to porcelain cups and fashion plates. Claude-André Deseine sculpted them and Elizabeth Vignée Lebrun painted their portraits.  The duc and duchesse d'Orléans stole the limelight by receiving them publically in the Palais-Royal.

According to Madame Tussaud, courtiers at Versailles played a jolly trick on the Indian party by setting up a mock wax tableau at Versailles, which contained real people rather than wax effigies.


4. Icons of the Enlightenment

Voltaire and Rousseau were among Curtius's most long-standing subjects. The American Elkanah Watson who visited the boulevards in 1779 described as the most striking of the wax figures,  "the celebrated Voltaire, who is closely engaged with a table full of books papers etc. before him.  His countenance expressed the very sensation of being a philosopher."  (quoted by Pauline Chapman, p.23).  In 1784 Mrs Cradock was less approving of a tableau featuring Franklin, Voltaire and Rousseau seated at a table: "the workmanship was so good that the very character of these famous, though baneful, men was conveyed by their appearance" (p.5-6; 59-60)  Pilbeam, Madame Tussaud, p.25-6.

Another author who is mentioned several times was the lawyer and journalist Linguet, whose  Mémoires sur la Bastille, featured prominently among Robert Darnton's "forbidden bestsellers". According to Professor Darnton, Linguet and Mirabeau, were  "the two writers who did more than anyone else to turn public opinion against the government in the 1780s" [Darnton, The Forbidden bestsellers of Pre-Revolutionary France (1996) p.75] 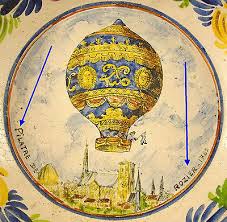 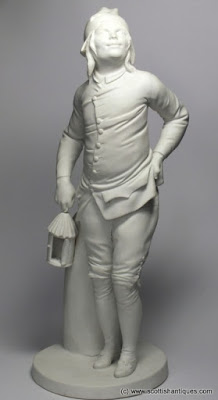 On Jeannot, see  Frederick William Hawkins, The French Stage in the Eighteenth Century, vol. 2 (1888), p.257-8
In 1779 playgoers flocked to the farces of Dorvigny at the Foire Saint-Laurent. Their success owed much to talents of the actor for whom they were written, a buffoon of the Foire, born Volange, but better known after one of his characters, as "Jeannot" (sometimes "Janot")

For a time the achievements of Jeannot were the principal topics of conversation in Paris; he received invitations into the best society, and portraits and busts of him were to be found in every drawing-room. According to the memoirs of the actor Fleury, they became a sort of currency:
The Queen, perhaps too ready to fall into the error of following instead of leading the fashion, purchased a number of busts to distribute among the courtiers, who regarded them as an insignia of knighthood.  Recipients of busts in plaster or biscuit ranked only as knights of the order; recipients of busts in alabaster or Sevres were treated as grands cordons or commanders.  Fortunately Jeannot was not cast in bronze.
https://books.google.co.uk/books?id=B9CY5EeKbCMC&pg=PA36&lpg=PA36#v=onepage&q&f=false


7. Rogues and thieves
Curtius's cabinet des grands voleurs may have lasted only briefly, but he continued to exhibit villains, both historical and contemporary - certainly they were a feature of the later exhibitions in the Boulevard du Temple.