31.  Anonymous pastel, in Buffenoir's collection, reproduced by him (2)

(Head and shoulders,  side-face right, queue, high stock, coat with dark collar, patterned waistcoat open at the throat.)
I can't find this one - Thompson's reference is to the drawing (No.11) which the label says is "in the manner of a pastel".

32. Lithograph, from a picture attributed to David, in M. Buffenoir's collection, and reproduced by him (10)

(Full length, tail coat, sash, breeches, boots;  Robespierre making a speech.  MS on desk right, background of citizens behind barrier.)
Buffenoir, vol. 1(2) p.254-5.  Plate 4.
Presumed to represent an unlocated original portrait by David.  I am not sure whether there are any copies of this lithograph in addition to Buffenoir's reproduction? 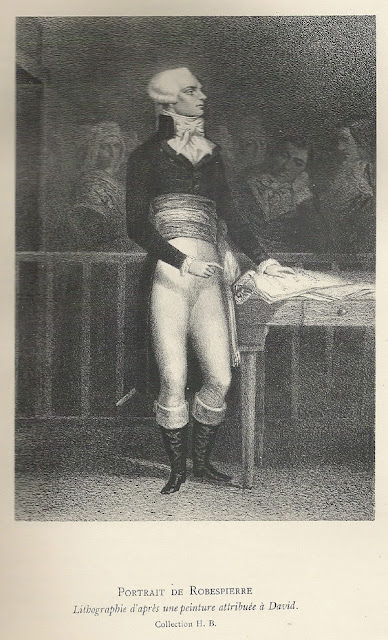 33. Anonymous oil-painting originally from the collection of Arsène Houssaye, now in M. Buffenoir's collection; shown at the Galérie Georges Petit in 1893.

(Head and shoulders, 3/4 face right, in oval frame). Not like Robespierre.  Reproduced in Buffenoir (22)

Is this the portrait already listed as No. 22?  In any case it probably isn't Robespierre?

(Head and shoulders, 3/4 face right; not the least like Robespierre)

36. Anonymous oil painting from M. Buffenoir's collection, reproduced by him (28)


37. Anonymous oil-painting in the Musée Carnavalet

Presumably this isn't in Buffenoir.  I haven't been able to find it in the Musée Carnavalet collections either so far....

? I wonder if this is the same painting as No.26 - the picture is illustrated both in Buffenoir's original AR article and in the monograph version.

Now in the Musée Carnavalet:
http://parismuseescollections.paris.fr/fr/musee-carnavalet/oeuvres/robespierre-tete-de-profil#infos-principales 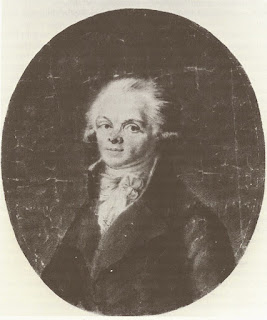 Buffenoir reports that according to M. Armand Dayot the picture was offered to the Cabinet des Estampes by Marat's sister and presumably originally belonged to Marat himself.

Reproduced in David P. Jordan, Revolutionary career, Plate VII:  Jordan comments:  "The portrait has a kind of intensity that is lacking in most of the portraits.  Partly this is created by having the figure emerge so starkly out of a black background" (p.254).

This looks like a pastel - possibly it is one of a series of "deputies" by Boze which included Mirabeau, Danton and Marat.   Does it still exist in the BN?  I can't find any modern reproductions.

42. Crayon drawing in two colours by J. Boze (?), in the Versailles Museum

(Head and shoulders, side face left)  Like No.40, but idealized.

Versailles catalogue entry:
http://collections.chateauversailles.fr/#9a0c2cc7-358f-454e-9ce0-fdcde945873d
According to this, the drawing was "formerly ascribed to Antoine-Paul Vincent".

I wonder, therefore,  it this might be  the original drawing by Jean-Baptiste Fouquet for the physionotrace of Robespierre (No.19).   It is certainly very similar.

43. Engraving by Beljambe, from Gros, reproduced by Buffenoir (86) from his collection.

See Jordan, Revolutionary career,  plate V, and p.253: "One of the many mass-produced portraits of the deputies, issued in series by various booksellers, inexpensive, and intended for broad distribution.  This one is from a volume entitled La collection de Jabin (Jabin was the publisher).  The original drawing as done by Gros, the engraving by Beljambe.  The medallion at the bottom of the ornamental plinth, "la Loi et le Roi," represents the cachet of the Constituent Assembly.  Robespierre's date of birth is wrong:  he was born in 1758 not 1760.  Gros's  original sketch is in the Bibliothèque Nationale.  The wig he is wearing here appears in many portraits"

Copies are relatively numerous.  See for example:
http://gallica.bnf.fr/ark:/12148/btv1b8412301d
The original drawing by Gros  is illustrated in the Stanford Digital collection:
https://frda.stanford.edu/en/catalog/mj262qv2437


44.  Engraving by Gautier, after Bonneville, from Buffenoir's collection, and reproduced by him (94).  Also an English engraving by Chapman

(Head and shoulders, side-face left)  Like No.42 but more lifelike. 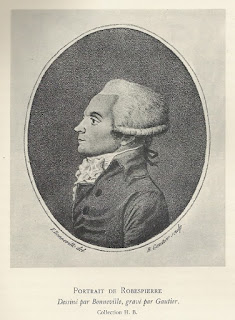 Buffenoir, AR vol.1(4) p.650-1, Plate 13. "The portrait by Bonneville, which has become rare, passes with reason as one of the finest of Maximilien, on the same level as Guérin and Fiesinger.  The artist understood the soul of Robespierre.."

In fact this engraving, or variants on it, are quite well-known, for example:
http://gallica.bnf.fr/ark:/12148/btv1b84123037?rk=21459;2
Portrait by Bonneville, engraved by B. Gautier. 11 cm x 9 cm. Inscribed "Deputy of the Department of Paris to the National Convention in 1792; decapitated 10 Thermidor, Year II of the Republic."   [One of a large series of portraits by François Bonneville, an artist who specialised in likeness of Revolutionary and Imperial celebrities.]

Buffenoir also lists an English engraving by Chapman after Bonneville, which Thompson characterises as "very similar".  This must be the print, but it isn't the same and it clearly isn't Robespierre!

Wrong in almost every particular, but not unlike No.27.


47. Anonymous painting, in England (?), known only in Egleton's engraving. Belonging to J.B. Jarman (?) 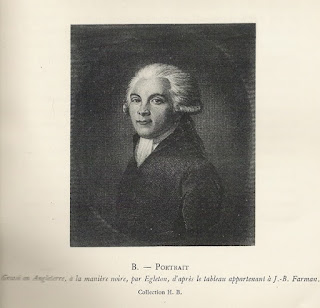 Buffenoir, AR, vol.1(2), p.256.  Plate 41b.
This is clearly the same portrait as the one used in the well-known engraving by Vérité, which is described separately by Buffenoir but not listed by Thompson:
See: Buffenoir, vol.1(4),  p.647: Maximilien Marie Isidore Robespierre, duputy of the Province of Artois. Portrait  "drawn from nature", engraved by Vérité.   Oval medallion on striped background. 12cm by 9cm. Bust facing to the left on a dark background, powdered wig, loose white cravat, collarless coat, ceremonial cloak.  Verse commending Robespierre as the "Incorruptible friend of the people". Exists in monochrome and coloured versions 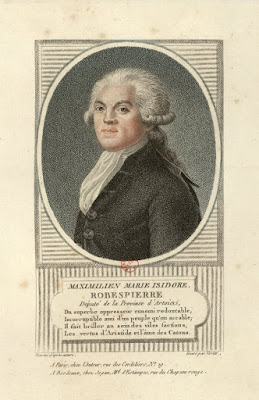 A version in oils - possibly the original painting - was acquired by Versailles in 1909. It is listed as previously belonging to the Vicomte de Cormenin.


Hervé Leuwers chose this picture for the cover of his 2016 biography of Robespierre.
The fullest notice is on Joconde:
http://www.culture.gouv.fr/public/mistral/joconde_fr?ACTION=CHERCHER&FIELD_98=APTN&VALUE_98=Cormenin&DOM=All&REL_SPECIFIC
See also, on Histoire par l'Image:
https://www.histoire-image.org/etudes/robespierre-incorruptible-dictateur?i=143

According to Buffenoir, this was a small oval portrait which belonged to Victorien Sardou; sold in 1909. Sadly, it is not to be found.

See Gustave Laurent, Annales historiques de la Révolution française 1928, vol. 5(25): p. 63-5.  Edme-Bonaventure Courtois (1754-1816), the member of the Convention charged with Robespierre's papers after Thermidor, had a limited edition of prints made by "the engraver Godefroy" after an original portrait in Robespierre's possession which was a "striking ressemblance".  The picture and the engravings are untraced;  there is no need to image an engraving by "Geoffrey" since Jean and François Godefroy are well-known portrait engravers of the period.