It is hard to find anything amusing or anecdotal to cheer up an account of the Terror in Arras.  Fortunately I am saved by another parrot, this one an outspoken counter-revolutionary. Sadly the story proved tragic rather amusing for the bird's unfortunate owners. 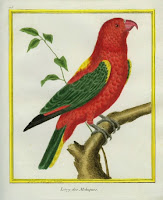 The parrot belonged to an elderly former nobleman, Louis-Auguste, marquis de La Viefville whose ancestral lands were at Steenvoorde on the northern border of the Pas-de-Calais, some fifty miles from Arras. Here he lived in quiet retirement in the château d’Oudenhove with his daughter Isabelle-Claire-Eugénie-Françoise and her infant son Louis-Eustache. Their chances of weathering the Revolutionary storm were always remote since Eugénie-Françoise's husband and first cousin, Eugène-Joseph, comte de Béthune was a suspected émigré.  On 6th July 1793 his name was officially added to the proscribed list.  In August La Viefville and his daughter were arrested, taken to Arras and detained in the prison des Baudets.  Subsequently in Spring 1794 La Viefville was transferred to the Hôtel Dieu and Eugénie-Françoise to the Abbatiale.

On 22 ventôse II, 12th March 1794,  Le Bon ordered all citizens of Arras to return from their estates to the town where they could be kept under surveillance.  The family retainers with the Louis-Eustache left for Arras and took up residence in the hôtel owned by  Béthune in the rue du Saumon.  It  was here that the parrot betrayed them, when its unpatriotic cries of "Vive l’empereur ! Vive le roi ! Vive nos prêtres ! Vivent les nobles !"  were brought to the attention of the Commissaire Galland, secretary general of the department and a confident of Le Bon.  On 16th April 1794, two servants, Marguerite Farinaux, a laundry maid and Caroline Pitre, the child's nurse, were arrested and,  on 22nd April, the  marquis and his daughter were transferred to the prison des Baudets to join them.  The four were officially charged:

..with being traitors to the fatherland and enemies of the Republican government: seeking to encourage the reestablishment of royalty;  Louis-Auguste and Françoise La Viefville having taught and kept very carefully a parrot, which repeated: vive l’empereur, vive le roi, vivent nos prêtres, et vivent les nobles.  Caroline Pitre and Marguerite Farinaux, accomplices of the aforementioned Louis-Auguste and Françoise La Viefville, having failed to declare that the parrot existed in their house.

A brief hearing took place the next day.  Jacot the parrot was solemnly brought in for interrogation but confined himself to whistling in response to the questions put to him.  La Viefville claimed - perhaps a little lamely - that the bird had already been taught the culpable words when he bought him over ten years previously in Brussels.

The marquis and his daughter were  also accused of attempting to emigrate at the time of  Eugénie-Françoise's confinement,  when she had retired to Poperinge, over the Flemish border a few miles from Steenvoorde. However, since  since La Viefville was able to produce a certificate of residence from Steenvoorde,  this more credible charge was dropped.

Despite Jacot's disappointing performance  La Viefville and his daughter, who had refused a defence lawyer, were unanimously judged guilty and condemned to death. The hapless maid Caroline Pitre was also executed; Marguerite Farinaux, who was able to show that she was in service with the Béthune family, was acquitted, but remained in detention.


The Archives of the Pas-de-Calais has a copy of the printed judgment which they reproduce on their website:

The La Viefville estates were confiscated and never restituted to the family; in 1798 they were judged to be forfeit on the technicality that Louis-Eustache, who died in December 1794 without having taken possession of his inheritance, was the son of an émigré.  The  château d’Oudenhove was demolished in 1793.

As to Jacot, the fate of the parrot was the subject of much debate.  According to Armand Guffroy it was finally entrusted to Le Bon's wife, Marie-Élisabeth Régniez, to be given a republican re-education and  taught to cry, "Vive la Nation!"  How sucessful this was is, sadly,  not recorded....

The aforementioned Louis-Auguste Marquis de la Viefville  and Madame de Bethune his daughter, whose husband had emigrated, both died in Arras by the guillotine, victims of the ferocious and bloodthirsty Le Bon, 14 Floréal  2 , 23rd Avril 1794, the daughter before the father, and their property was confiscated to the profit of the Republic.

The LaViefville and Le Poyvre families, by virtue of the laws of 14 Floréal and 31 Prairial Year III  (3rd May and 9th June 1795) which ordered the restitution of the property of those condemned in the Revolution to their families, claimed the property left by Louis-Auguste de la Viefville in France, which was restored to them apart from that already sold.  The infant Bethune was no longer living at the time of these laws;  but subsequently this property was taken away and returned to the national domain, by the decision of the Minister of Finance Bamel, 8 Fructidor, Year VI (23rd August 1798), on the pretext that the infant Bethune, although he died before the restitution of the property and had never taken possession of it, transmitted it to the Republic as the representative of a father who had emigrated, according to the terms of the revolutionary law of 17 Nivoise Year II (6th January 1794); in other words, the republic unjustly repossessed with one hand what it had justly given with the other.
Histoire généalogique de la famille de Croeser (1819),
https://books.google.co.uk/books?id=23lFAAAAcAAJ&pg=PA49