The Dead of Le Mans

In the Vendée the passage of the years has done little to soften the bitter legacy of the Revolution. In 2008 there was a powerful reminder of past conflict when building work in the place des Jacobins, in the centre of Le Mans uncovered the communal graves of more than 150 dead from the battle of 13-14th  December 1793 in which Revolutionary forces routed the remnants of the Catholic and Royal Army. The excavation of the site by rescue archaeologists from INRAP has taken place against a background of controversy: to date the ultimate resting place of the bodies remains undecided.


Background: The Battle of Le Mans

The Battle of Le Mans took place in the final destructive phase of the War in the Vendée, the so-called Virée de Galerne, in which La Rochejacquelin led his army north in an abortive attempt to rendezvous with the English fleet at Granville, then turned back in a rapid retreat.  Having failed to cross the Loire at Angers on 4th-5th December, the royalists fell back to Le Mans which they took without difficulty on 10th December. The number entering the town is estimated at 40,000 mhalf of whom were non-combattants. On Thursday 12th December, at about midday, a Republican army of 20-30,000 men, led by Marceau, began a counter attack. The barricades raised by the royalists resisted the Republican artillery for only a short time and the following day a general assault was launched. The blancs held up the progress of the Republican army in order to allow the retreat of the main troop towards  Laval. The urban topography, with its narrow streets,prevented a rapid evacuation and many were trapped.  The losses were enormous, perhaps as many as 10,000-15,000 dead, mostly women and children cut down as they fled, with 2-5,000 killed in the fighting, as against a hundred or so Republican casualties. Less than a month later, on 24th December 1793, the Virée de Galerne was to come to a final brutal end with the quasi-total destruction of the Catholic and Royal Army at Savenay.


On the day after the battle, the streets of Le Mans were littered with corpses. The Republican troops had left in pursuit of the fleeing Vendéans and the muncipal authorities had already abandoned the town, leaving the population to cope with the devastation.  Fear of epidemics, but also the understandable desire to clear away traces of the conflict as soon as possible, forced them to dispose of bodies quickly. On 14th December a provision administration was nominated to take charge of the inhumations.  A report written in 1798 stated that the bodies were buried within two days in "great pits" in "various places".  Ninety-five carts carried twenty-plus bodies at any one time. The Quinconce des Jacobins was one of the sites chosen;  it probably contained victims from the fighting in the central area (place de la République/ place de l’Eperon) which took place on evening of the 12th to the evening of 13th December..

The findings of the archaeologists

The site was excavated during the course of 2009-10 and the analysis of the remains finally completed in 2016.  In all 159 individuals were uncovered in nine burial ditches, representing 5-7% of an estimated 2500-3,000 dead thought to lie within the walls of the town. The ditches were all rectangular in shape but differed in size, and above all in depth.  The number of burials in each varied from a dozen to over fifty. The evidence testifies to their hurried inhumation. The bodies were disposed of with little care, often piled on top of one another, with no distinction of age or gender. They were covered with a thick layer quicklime, testimony to fear of epidemics, but this was distributed unevenly  and in places was incomplete.

One ditch, broadly circular in shape, is distinguished from the others in that the bodies were laid out with more care, head-to-toe, on two levels.  The remains were those of adult men, with only one woman. Conjecturally, these could be Republican dead or townspeople,  but there is no supporting evidence to corroborate this conclusion.

Remnants of military uniforms have been recovered from two of the pits, including buttons of Republican origin. However, this does not provide identification as enemy uniforms were often salvaged  by the Vendéan troops.. The majority of the bodies were undoubtedly royalists, but the burials in all probability included Republican soldiers and inhabitants of the town as well.

Contemporary reports describe pillaging and massacres by Republican troops determined to "exterminate" the "brigands"; but  plundering does not seem to have taken place systematically. Vestiges of clothing suggest the bodies were at least partially clothed at the time of burial and the finds included personal effects -  a purse containing change and an incised gold cross.  It could well be that fear of disease was an inhibiting factor;  the Catholic and Royal army was reputed to suffer from a form of dysentery, the fièvre brigantine. 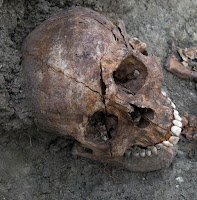 The vast majority of individuals were mature adults;  the twenty-three "children" were mostly 10 to 14-year-olds, socially assimilable to adults.  The youngest individual was three or four years old, excluding a foetus in utero.  Men were in the majority: 70 men for 38 women (where sex can be determined).

The findings on trauma are in line with historical details of 18th-century weapons.  There were numerous wounds from blades, particularly sabres, and also impact from fire arms - different types of shot recovered suggest the use of  pistols, light artillery and grapeshot. In general, fire arm damage was a feature of male skeletons, whereas  female skeletons were more likely to exhibited blows and sabre cuts, often on the head or legs, suggesting non-combattants fleeing the town. Many had suffered multiple wounds of considerable ferocity.

What to do with the remains? 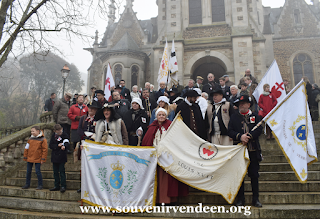 There has been much dispute over a suitable site for reburial. Technically this decision is a government prerogative, but there has been much pressure from memorial societies such as l’Association des descendants de Chouans et de Vendéens and the Vendéens de Paris.  INRAP anthropologist Élodie Cabot, in charge of examining the remains, confessed to Figaro in June 2010 that she felt she was walking on eggshells.

From the first local politicians tended to assume that the remains were exclusively those of the Catholic and Royal Army. On 10th March 2009 the mayor of Le Mans, Jean-Claude Boulard, signalled that, if the bodies were demanded by the Vendéan families, he would not oppose their removal.  Philippe de Villiers, interviewed by Ouest-France, seconded the proposal.  In April 2009 the Catholic blog Le Salon beige also agreed that it was only just that the remains were enterred in the Vendée. However, Cécile Bayle de Jessé,  president of the association Le Mans Virée de Galerne  pointed out the impracticality of  repatriating the remains, since historical research showed that Army at this date came from a wide area and included  Angevins, Poitevins, Bretons and Normans*.  Her association favoured  inhumation in the former chapel of the Franciscans in Le Mans itself.  Pierre Chevet, the INRAP archeologist in charge of the dig, was a lonely voice when he reiterated that it was not possible to distinguish the royalist dead with certainty.

In the meantime debate was coloured by the return to the media of Reynald Secher, exponent of the war in the Vendée as "genocide". Secher reissued his 1986 book and in  2011 expanded his thesis in a new work, Vendée, du génocide au mémoricide.  In his view, the discoveries at Le Mans could only confirm the ferocity of Republican vengeance, an analysis echoed for example, in an episode of L'ombre d'un doute, broadcast in 2012, in which Franck Ferrand affirmed without qualification that "the remains are those of Vendéans, combattants of the Catholic and Royal Army" :


Following completion of archeological investigation in 2016, controversy  was renewed.  Hervé de Charette spoke in favour of creating an "ossuary for the martyrs of Le Mans" at  Saint-Florent-le-Vieil, whilst Yves Auvinet, président of the departmental Council of the Vendée, favoured the Historial de la Vendée in Les Lucs-sur-Boulogne. In February 2016, local government representatives commissioned recommendations from Élodie Cabot and from the historian Alain Gérard, an advocate of "national reconciliation". In April 2016 Gérard  came down in favour of either Saint-Florent-le-Vieil or Les Lucs. In the meantime a new society Mémoire vendéenne put forward a project for yet another lieu de mémoire, the chapelle des Alouettes at Les Herbiers.

The matter is now referred to the Ministry of Culture and Communications, and for the moment, at least, the skeletons remain in storage in the INRAP premises at Carquefou near Nantes.


General history of the Vendée

* The geographical origins of almost 3,000 soldiers of the Catholic and Royalist Army have been studied by  Pierre Gréau in La Virée de Galerne : 18 octobre-23 décembre 1793 , Cholet, 2012
http://www.archives.vendee.fr/Connaitre-les-Archives/Actualites-archivees-oct.-2012-juin-2016/La-Viree-de-Galerne-revisitee-par-Pierre-Greau  base nominative de 2937 personnes