Carrier: the sex-life of a Proconsul


In 1924 a local historian from Nantes, A. A Vélasque, examined the evidence for Carrier's sexual adventures and considered them "greatly exaggerated":
He has been given ardent mistresses, Mme Lenormand, a certain dame Prasles, demoiselle Caron, who may or may not be the same person,  plus a choice of beautiful women among the captives of the Vendée and among society ladies of Nantes who gave themselves to him to save the life, if not the honour of their husbands.
For one man, in three months, that is a lot.  We must either reconsider or concede to the pallid head of our Conventionnel a place in the gallery of irresistable don Juans and Hercules of love.(p.149-50)

In the interests of trivia, let us review the evidence.....

This bare statement is embellished in by Guépin in 1839, who claimed to have possessed a written list of women, mostly respectable society ladies, who had attended these parties, but which he had destroyed to safeguard their reputations. There is no reason to doubt such a dossier existed, but careful reading shows that Guépin was not really claiming that these women were the Representative's mistresses.

Like Le Bon, Carrier gathered his accolytes around him and rowdy occasions are well-attested, notably the infamous drunken party held on the galliot La Gloire  in the course of the noyades. Members of his circle, particularly his chief lieutenant,  Guillaume Lamberty, had a considerable reputation for violence and lusty appetites.  No doubt there were women as well as alcohol involved, but the gatherings were more about solidarity than sex.

As Vélasque points out, it is not really known  why Carrier abandoned the Hôtel de La Villestreux for his stronghold in the suburbs, but he was there barely more than six weeks, and seems to have been ill for much of that time.  The idea he was pursued by his inner demons is a tempting one; one night his servant Jean Cousine was asked to lock him in his room where he remained until eleven o'clock the next morning. On 29th January he wrote to the Committee of Public Safety that he was ill and exhausted, and asked to be relieved of his mission.  Between political conflict and poor health, it seems unlikely he had that much energy for feats of sexual debauchery.


Did he take women from among the prisoners?

Vélasque, following Michelet, thought it unlikely that Carrier would have had recourse to disease-ridden brigandes from the prisons when he could have his pick of women patriots. However, his lieutenants Lamberty and Fouquet certainly succombed to the temptation posed by aristocratic silk petticoats, and were sent to the guillotine in February 1794 for sheltering "notorious counter-revolutionary women".

For Carrier himself the evidence is again not decisive. According  to Vélasque the only direct testimony is from Phelippes Trojolly, president of the Tribunal in Nantes, a hostile and unreliable witness.  He testified that on Carrier's orders, three women captives were guillotined having served his lust;  as 19th-century historians put it, they "passed from his bed to the scaffold" (Lescadieu & Laurant, p.79). Tronjolly also recounted that the husband of one of Carrier's mistresses was consigned to a noyade.

We might add, though the context is slightly different, the deposition of Perotte Brevet, a tailoress, who claimed to have resisted the advances of Carrier when she tried to save her imprisoned brother from death. This was an story later often repeated and embroidered. It is also hard to know what to make of the curious garbled account of a woman prisoner held by Carrier at the château d'Aux (on whom see below). 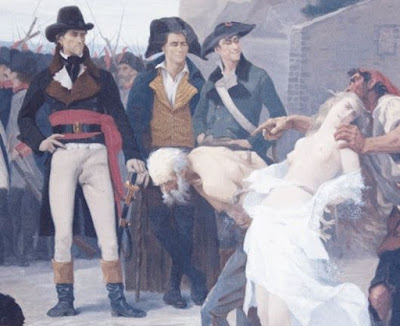 On the whole the weight of evidence is not great. It is unsurprising Carrier's dealings with women prisoners and supplicants had sexual overtones, but how far he passed from words to deeds is difficult to say.  In the existing anecdotes the emphasis is less on Carrier's rampant sexual appetites than his predatory cruelty.

Here we are on much safer ground. Two women are named as Carrier's mistresses:

Louise-Angélique Caron
Caron, who later  married a "merchant" called Louis Prasles and was known locally as"La Prasles", was credited by 19th-century historians with being Carrier's maîtresse-en-titre. She left behind a reputation for beauty and benevolence: Lenotre describes her as "a splendid courtesane".  In November 1813 she was forty years old, so would have been just twenty at the time that Carrier knew her.  There is some circumstantial evidence about her life, but little which throws any light on her relationship with the proconsul.

Lescadieu and Laurant (p.95)  repeat a story concerning a hôtel in the boulevard Delorme known as "le Palais-de-Boeuf" , which La Prasles was said to have had constructed using profits from the meat trade with the Republican army. Vélasque went through all the relevant records for the house in the Municipal archives but could find no mention of Caron;  nor could he find a merchant named Prasles in the Nantes trade directories.  He was even sceptical that a civilian woman could have been involved in army provisioning. However, Carrier's biography Alfred Lallié found documents in which she is described as "étapière" - the traditional term for such a victualler.

A note in the Revue du Bas-Poitou for 1969 dispels all doubts by providing details from her marriage certificate.  On 15 pluviôse an IV (4th February 1796)  Louise-Angélique Caron married at Nantes, Louis-Charles Prasle; their son, already a year old, was recognised at the time of the marriage.  Louis-Charles's profession was given as "entrepreneur des subsistances militaires" and Louise-Angélique's as "entrepreneuse des vivres-viande". 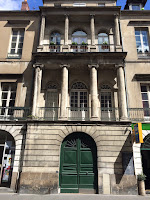 Under the Directory, thanks to "powerful influences", Caron prevailed against the wishes of the municipal administration, to build her hôtel on a site which interrupted the line of the boulevard Delorme.  In 1842 it was painstakingly dismantled stone by stone and relocated to the corner of the rues Copernic and Sévigné where in 1969 it could still be seen.  I think this imposing facade, at 11 rue Copernic, is probably the house in question.

Vélasque unearthed a police dossier on Louise Caron, dated from 1807.  Here she is described as the wife of Louis Prasles, and "ex-mistress of Carrier" / "prostitute of Carrier, charged by him with furnishing meat to the army". She is characterised as an intriguer, universally disliked.  The document claims that Prasles, who is now identified as a minor tax official, attached himself to her for her money; but, if so, there is now no sign of her former wealth.   She now makes a living dealing in army substitutes - as well as by fraud based on spurious social connections. In 1808 she is given a passport to join her husband in Clermont; in 1813 she is briefly imprisoned in Le Bouffay, then detained in Rennes but finally freed and the surveillance lifted.  According to Lescadieu and Laurant  she was ultimately to die miserably by her own hand in a prison cell, strangling herself in her own shawl.

Of Carrier, beyond the bare fact of their liaison, there is not a word.

Carrier’s second attested mistress was Madame Le Normand, wife of François Le Normand du Pasty (born 1767), the youngest son of René-Pierre Le Normand du Buisson, former procurateur and one of the four judges of the Nantes Revolutionary Tribunal. (This was quite an prominent family: several of the women were Ursuline nuns; Victor Hugo was François's great nephew)

François was by all accounts a wayward young man.  On 16th August 1791 he married, against his father’s express wish, Louise-Marie Gandriau (born 1769), daughter of a humble official (huissier) in the Palais de Justice. The lady in question had the reputation of being "une jeune personne de moeurs légères".The wedding took place in the Église Sainte-Croix  and was officiated by a constitutional priest.  None of the groom’s family were present.   Already a freemason, Le Normand  rapidly became an associate of the most radical individuals in Revolutionary Nantes. In October 1793 shortly before Carrier’s arrival, he was made administrator of the military hospital in the former Ursuline convent, in which capacity he was to prove a useful ally.

Madame Le Normand (Lenotre calls her “Semine” but I am not sure why) lost no time in establishing herself in Carrier's affections.  She was referred to as "la putain à Carrier" and oopenly approached by people seeking favours from the Representative. The evidence, which from comes mostly from the testimony of two domestic servants, reveal glimpses of a complicated relationship. (They are reproduced in full in the article by Vélasque.)  A washerwoman, Louise Couraud, reported that Carrier came frequently to the Le Normand residence in the rue Maupertius, where he behaved as if he were the master of the house, swearing, bawling or storming and shutting himself up in the evening  with his mistress.  When told that his wife was with the Citizen Representative, the complaisant husband would retreat discreetly.  Likewise Madame Le Normand often visited Carrier and once stayed with him for fortnight "in a garden" (presumably at Bourg-fumé:  perhaps during one of his bouts of depression?).  She would send him foodstuffs - poultry, tea and milk loaves made from flour bought for the sick. There was plenty of unpleasant repartee concerning the fate of the brigands; according to the cook Olive Recapet, Carrier at one supper party proposed a toast to  "those who had drunk of the big cup". There was also a murky episode where the pair disappeared suddenly to the nearby château d'Aux where Muscar and Léopold Hugo (father of Victor) were camped.  Carrier was overheard to have hidden (and later possibly to have drowned) a "superb woman" from among the prisoners.

When Carrier left Nantes the Lenormands were charged with selling his furniture and effects and a few weeks later, Madame Le Normand and her twelve-year old brother joined him in Paris. Pierre Chaux, a former member of the Revolutionary Committee in Nantes, signalled  that she was living with Carrier in his lodgings in the rue d'Argenteuil. Le Normand himself arrived at the end of May on his way to a lucrative  post as Commissaire des guerres with the Armée du Nord.  According to a family letter he subsequently obtained a divorce and remarried in Valenciennes.  As to Louise-Marie, according to one geneanet post, she remarried to the Napoleonic general Philippe Joseph Jacob (1765-1826)

At his trial and after his condemnation, Carrier reasserted a conventional concern for his wife and her future financial situation.  In Year VI she emerges briefly into the historical record when, "reduced to the greatest straits", she petitioned the Directory," for monies owing to Carrier and for the proceeds from the sale of his furniture". She lived on quietly in Aurillac until 18th August 1830 when she died in the rue du Collège.