A forthcoming auction of Royal jewels

This November sees the sale by Sotheby's in Geneva of the fabulous  Bourbon-Parma collection of royal jewellery, which is set to fetch a cool $5 million. Among the treasures are several pieces which belonged to Marie-Antoinette. The most spectacular is an enormous pearl (26 mm x 18m) on a diamont pendant, estimated to be worth $1-2 million.  There is also a necklace with more than 300 natural pearls ($200,000-$300,0000) and a pair of pearl drop earrings  ($30,000-$50,000). A diamond parure made for Louise of France, grand-daughter of Charles X, contains five gems which also once belonged to Marie-Antoinette.

The provenance of the collection is impeccable.  Marie-Antoinette's jewels were smuggled out of France at the time of the flight to Varennes.  They were subsequently inherited by the duchess Angoulême who bequeathed them in turn to her niece and adopted daughter, Louise Duchess of Parma. 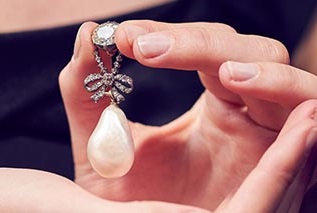 
Marie-Antoinette and her jewellery:  a chronology

On their wedding day Louis presented his bride with a huge coffer containing the Crown Jewels traditionally reserved for the use of the Dauphine of France.  The chest was nearly as tall as Marie-Antoinette herself and three times as wide; it was  covered in richly embroidered crimson velvet with a robin's-egg-blue silk interior. Reportedly her hand shook with excitment as she opened it with a tiny golden key.  The contents were valued at over two million livres.  One of the most stunning pieces was a necklace of oversized  pearls which had been worn by Louis XIV's mother, Anne of Austria. In addition Marie-Antoinette brought from Vienna as part of her trousseau a splendid set of white diamonds. It was uinversally agreed that the young princess magnificently outshone her wedding guests (Weber, p.47-8)

In the first years of the new reign, there were significant additions to  Marie-Antoinette's personal jewellery collection. In January 1776 the Austrian ambassador Mercy-Argenteau, reported to Maria-Theresa that Louis had given his wife more than 100,000 ecus-worth of diamonds during the previous year; besides which, she already owned a "prodigious quantity",  Among Louis's gifts was a pair of pendant earrings with pear-shaped brilliants which often appear in portraits.

It was in 1774 that Boehmer, the Court jeweller, made the first overtures to the Queen in the notorious "diamond necklace affair". This scandal was to dog Marie-Antoinette for much of the reign, and did more than any other episode to damage the reputation of the monarchy.  Over the year historians have disproved Marie-Antoinette's complicity in the plot and dispelled the grosser accusations against her.  However, as Marcia Pointon notes perceptively, the fault cannot be laid entirely at the door of the Cardinal de Rohan and the duped jewellers.  The Queen made herself vulnerable by her own behaviour.


Marcia  Pointon emphasises that during the late 1770s jewellery continued to be important to Marie-Antoinette; indeed owning and acquiring jewellery became an significant component in her quest for a more personal identity.  In the era of the Petit-Trianon, there was not so much an abandonment of jewels as a shift in how they were worn. "The notion that the Queen had no interest in diamonds originates with Madame de Campan and is repeated frequently as writers have misread her gradual discarding of heavy parures as a disregard for jewels per se."(p.157)  Imposing gemstones were abandoned in favour of  jewelled ribbons and ornamental flowers.  Even for more formal occasions the Queen preferred light settings and  matching necklaces, pendants and earrings: feathers and ornamental hair pieces, as well as bracelets made of ribbons or small jewels also featured largely. The gemstones themselves became subsidiary to the ornamental motif and to a new emphasis on novel settings.

Germain Bapst, historian of the French Crown Jewels, notes that the great diamonds of state, which were placed at the disposal of Marie-Antoinette, were now worn in casual arrangements to adorn hats and hairpieces or as centrepieces in decorative arrangements -  set negligently in an aigrette of heron's feathers, or as drops of water on garlands of flowers. In 1788 both the Sancy and the Miroir-de-Portugal diamonds were inventoried in a section "concerning the diamonds, brilliants, roses and semi-brilliants of the Crown, employed in the parures of the Queen"(Bapst, p.219) The great female parures were all dismantled and the jewels laid out on white paper so that they could be easily moved around or placed in temporary mounts. Since Marie-Antoinette invariably added some of her own jewels to the arrangements, it became  difficult to distinguish the state jewels from her private property. Indeed in 1785 she successfully acquired a parure of diamonds and rubies which  she had worn at the beginning of the reign and had had much augmented (Bapst, p.440)
See:  Germain Bapst, Histoire des joyaux de la couronne de France d'après des documents inédits (Paris, 1889) , p.447ff.
https://archive.org/details/histoiredesjoyau00bapsuoft


During the first months of the Revolution Marie-Antoinette demonstrated her opposition by making no concessions to the changing times.  After August 1789 she pointedly reintroduced her most magnificent jewels, including diamonds, into her daily costume.  When a delegation led by Bailly and Lafayette called on the royal family at Versailles on August 25th, Marie Antoinette chose to receive them in "an everyday gown, but elaborately decorated and absolutely covered in diamonds" (Journal of Mme La Tour du Pin, p.208
https://archive.org/stream/journaldunefemme01latouoft#page/208 )

After October 1789, she adopted tricolour costume and purchased more cockades in order to express her superficial faith in the people's "new ideas".  Although she had arrived at the Tuileries clutching a casket of her most valuable diamonds, she took to appearing in unfussy white bonnets and fichus.  For the Fête de la Fédération she wore a simple white dress accessorised with tricolour feathers and ribbons.

One of the first acts of the Revolutionary Assembly was to take over custody of  the Crown Jewels; according to Bapst,the King and Queen were initially permitted a few for their own use but by 1791 everything had been recalled to the Garde-Meuble. Madame de Campan explains the fate of the Crown Jewels. When the King was relieved of his responsibility for the Crown Jewels, the Queen was in possession of "those that she used regularly": twelve Mazarins, several rose-cut diamonds and the Grand Sancy - among the choicest diamonds in the collection.  The Queen insisted on handing the jewels over personally to the appointed commmissioner.  She is said to have insisted on presenting also "a string of fine pearls of great beauty" which had been brought to France by Anne of Austria and given to her by the King when she first arrived in france. According to Campan, she wished them to be regarded as national property.
Campan, ii, p.356
https://archive.org/details/memoirsofcourtof02campuoft/page/356


Campan recounts how prior to the flight to Varennes on 20 June 1791, she was responsible for packing and dispatching to Brussels all Marie-Antoinette's  personal jewellery.  Since October 1789 many items had been in the safekeeping of a loyal valet de chambre joaillier who had destroyed the original conspicuous red leather boxes marked with the Queen's insignia.  Madame de Campan and the Queen were observed and denounced  by a chambermaid after the recapture of the royal family.  However,the jewels themselves reached Brussels safely in the care of Léonard, the Queen's hairdressor, accompanied by the duc de Choiseul.
Campan,  ii, p.354
https://archive.org/details/memoirsofcourtof02campuoft/page/354


Caroline Weber, Queen of Fashion: What Marie Antoinette Wore to the Revolution (2007)


Some surviving jewels which belonged to Marie-Antoinette: 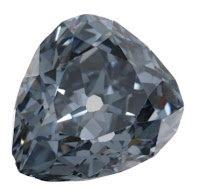 This blue heart-shaped diamond from the Queen's private collection is not to be confused with the great French Blue which belonged to the Crown Jewels. Marie-Antoinette brought with her from Vienna this greyish-blue gem which weighs 5.46 (metric) carats. The diamond was set in a ring as a gift to the Polish Princess Lubomirska in 1791 and later passed to the Potocki family.  It was exhibited in Paris in 1892 and at the Exposition Universelle in 1900.  Half a century later it featured in the 1955 Marie-Antoinette exhibition in Versailles.  In 1967 the 'Marie Antoinette Blue' was sold at the Palais Galliera in Paris to a private European buyer. It was offered for sale by Christie's  in Geneva in May 1983, remained unsold but was subsequently purchased by "a European private collector".  Although it is not on public display, the diamond remains on the radar; it was exhibited at the MNHN in Paris in 2001 and  in 2009  was the subject of a thoroughgoing technical analysis by the Gemological Institute of America:
See GIA Monograph, reproduced in Gem Trading p.46-
https://issuu.com/gemtraing/docs/gem_trading__short_list

Diamond earrings in the Smithsonian 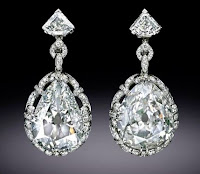 These pear-shaped diamonds  are "believed to have been set in earrings that belonged to Marie Antoinette".  Somehow they survived the depredations of the Revolution, to be given by Napoleon III as a wedding gift to the Empress Eugénie in 1853.  They later came into the possession of Princess Irinia of Russia and were acquired by Pierre Cartier in 1920.  The subsequent owner was Miss Majorie Merriweather, whose daughter Eleanor Barzin donated them to the Smithsonian. The setting was said by Cartier to be "original" but probably dates from the 19th rather than the 18th century.

This strand of forty-four graduated natural pearls, is identified as the necklace which belonged to Anne of Austria. Its history since the 18th century is not really known, but in all probability it was among the Crown Jewels auctioned by the Third Republic  and purchased by Tiffany's of New York in 1887.  The necklace was bought from Cartier's a wedding gift for the Woolworth heiress Barbara Hutton in 1933.  In 1999 it was auctioned by Christie's for the (then) record-breaking price of 1.6 million dollars. The purchaser was an "anonymous European buyer".

Pearls from the Sutherland collection 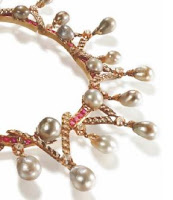 One of the few individuals allowed to visit Marie-Antoinette during her imprisonment in the Temple was the wife of the British ambassador  Lady Elizabeth Leveson-Gower, later Countess of Sutherland. When her husband was recalled to London in August 1792, Marie-Antoinette entrusted her with  two small sachets, containing 21 natural grey tear-shaped pearls and a handful of diamonds.  The gems remained in the Sutherland family until they were auctioned by Christie's in 2007.  The Countess had them fashioned into a necklace for her grandson's bride in 1849; the original pearls are suspended on a ribbon of diamond and gold, wrapped around a collar of rubies and additional button shaped pearls.