The Cathedral of Notre-Dame in the 18th century


All of us, were dismayed by the terrible fire at Notre-Dame, though happily more of the Cathedral and its treasures seem to have survived than could at first have been thought possible. It is perhaps encouraging to remember that the building has been through many vicissitudes in its long history..... 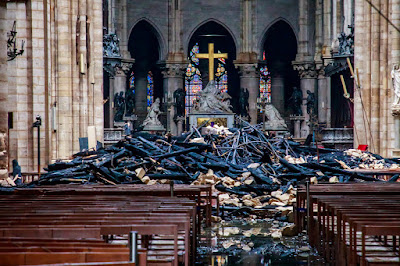 Contemplation of the future, inevitably raises uncomfortable debates about reconstruction, restoration and reinterpretation. The Age of Enlightenment has not received a good press in this respect. Despite a grudging admiration for individual works of religious art, it has long been fashionable to follow Viollet-le-Duc and his contemporaries in condemning the 18th-century's disregard for the medieval past.  According to my 1977 Blue Guide, for instance, "Until the end of the 17C Notre-Dame had preserved intact its appearance of the 14C, but the reigns of Louis XIV and Louis XV brought deplorable alterations, particularly in the destruction of tombs and stained glass".

It is worth noting the wise words of Professor McManners, who counsels against accepting the naive coupling of French Classicism with a wholesale rejection of the Gothic legacy. The repair of churches was undertaken  with a sense of historical continuity and the need to avoid  incongruities. The cathedrals of Blois, Toulouse and the abbey church of Saint-Etienne in Caen were all restored in the late 17th century in their original Gothic style. So too, the abbey of Poissy which was restored under the supervision of the king's architect Robert Cotte.  At Orléans where the cathedral had been destroyed by the Huguenots, the Bishop and local citizens successfully lobbied to retain the original medieval design. Hostility was confined mainly to Gothic "ornament" which countered prevailing ideas of simplicity, unity and good taste  (hence, says Professor McManners, the  inevitable "archaeological tragedies").   Many churches, Notre-Dame  outstanding among them,  underwent interior refurbishment, which often took place gradually, typically beginning with a splendid new altar.  Rood-screens were removed to give an unencumbered view of the Mysteries;  clear glass provided illumination.  Professor McManners sees the earlier part of the period as generally one of innovation and creativity, though the architectural imagination tended to become sterile in the second half of the century. [Church and society in eighteenth-century France, v.1 (1998) p.436-445]

Here is a brief "virtual tour" of Notre-Dame as it appeared in the 18th century:

The Cathedral's most ambitious embellishment project of the era was the extensive remodelling of the sanctuary and choir in fulfilment of the "vow of Louis XIII" of 1638 (to rebuild the main altar and erect a statue of the Virgin). Work was begun in 1699 on the designs of Hardouin-Mansart, but substantially completed under direction of Robert de Cotte  in the years 1708 to 1715. The elaborate production included many statues, reliefs and decorative elements, among them the celebrated pietà by Nicolas Coustou (1712-28) set in a niche behind the high altar and flanked by the kneeling figures of Louis XIII by Guillaume Coustou and Louis XIV by Coysevoix.  Although many of the individual elements have survived the years (and hopefully still do),  the altar on which the design centred, and the over all architectural setting, are now lost, victims of the depredations of Revolution and the medieval "restorations" of Viollet-le-Duc.

The enterprise was made possible only by  private donation:  one of the Canons of the Cathedral,  Antoine de La Porte (1627-1710), personally provided Louis XIV with 10,000 livres (?10,000 livres annually)  and financed many of the individual embellishments.  A painting by Jean Jouvenet, which imagines the Canon celebrating mass at Robert Cotte's  high altar - at the time not yet built - shows clearly the harmonious sweep of the space as originally conceived:


The work of dismantling the existing structures began on 29th April 1699. The bronze columns of the altar were removed, together with the suspended vessel containing the Blessed Sacrament ; also the retable and the five stones of the altar. Caskets of relics, statues and tombstones from the floor of the altar area were displaced. On 5th May  the foundations were commenced, entailing the removal of those buried in the choir  (who included Philippe of France, son of Louis VI). Most of the remains were relocated to the chapel St-Léonard.  A new crypt to receive the archbishops was created in 1711.

The first stone of the high-altar was laid by Archbishop Noailles on 7th December 1699.  The initial design, by Hardouin-Mansart,  was modified  by Robert de Cotte, who replaced the Roman Baroque altar, with its baldachin with twisted columns, by  a more characteristically French Romanesque design. 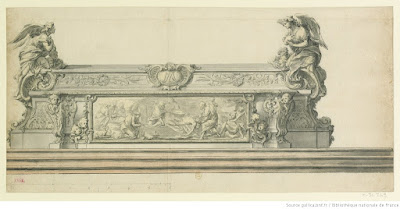 The high-altar occupied a prominent position in the middle of the sanctuary, highly visible despite the rood screen and rail which separated the choir from the nave;  the  large "six-sided" altar tomb, made of Egyptian marble flanked with decorative stone arches, was designed to be seen from all angles. It was set on a "grandin" of three steps made of white Languedoc marble - made even more splendid on Holy Days by the addition of a Savonnerie carpet.  The altar front was embellished with a gilded bronze relief of the Entombment by Antoine François Vassé.  On either side, set on white marble pedestals, stood two angels in adoration in gilded bronze modelled after Claude-Augustin Cayot.  The gradin was adorned with a crucifix and chandeliers by Baslin, replaced in 1760 with six gilt chandeliers by Philippe Caffieri.

Behind the high-altar, under the rear archway of the choir, a second altar, the autel des féries, was built for regular services outside Holy Days. This was of green veined marble.  In the niche above, between the two pillars was Nicolas Coustou's pietà: the body of Christ lay in the lap of the Virgin, who was positioned with her back against the cross, three sorrowing cherubin in attendance.  Above a gloire dorée, on which an angel was depicted dangling  the "suspension" containing the Blessed Sacrament.  On each side of the altar, on richly decorated pedestals, were the two royal statues - on the right Louis XIII by Guillaume Coustou (1712-15) and on the left Louis XIV by Antoine Coysevox (1713-15)


The prerogatives of Rome to have the greatest Masters of Sculpture, Architecture, and Painting, cannot be disputed;  but Europe has produced worthy pupils;  it is to them we owe the Chefs-d'oeuvres which have embellished the City of Paris.  To be convinced, one has only to cast eyes on the rare and curious Pieces with which the Choir of our Metropolitan Church has been enriched... by the most famous Craftsmen of our century, who  endowed it with the éclat and lustre that one sees today.  Everything there is so finely arranged and delicately worked that they have proved themselves Masters of their art...
Montjoye,  Description historique des curiosités de l’Eglise de Paris (1763) p.60
https://gallica.bnf.fr/ark:/12148/bpt6k5712219c/f72.item

The sanctuary was elevated by four steps above the choir and bounded by a circular marble and gilt balustrade. The eight pillars at the rounded end of the sanctuary were faced with marble to create classical columns and circular arches replaced the Gothic ones; the space above was adorned with representations of the twelve virtues.  Next to the pillars, were six bronze angels by Antoine Vassé, each holding  an instrument of the passion.

The Viollet-le-Duc's remodelled sanctuary and altar  with Vassé's Entombment and Coustou's pietà. The "Glory" by Robert de Cotte was banished by Viollet-le-Duc; the beautiful cross, which has shined through the gloom of the ravaged cathedral after the fire, was  designed by Marc Couturier and added in 1994. 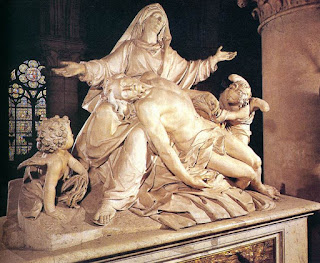 The remodelling included not only the sanctuary but the whole choir.  The floor was relaid  with marble mosaic tiles. The medieval roodscreen (jubé) was demolished and magnificent new choir-stalls in ornate woodwork (paid for by Canon La Poste) substituted for the old; there were fifty-two high stalls and twenty-six low ones, their backs decorated with bas-reliefs and the pillars between the seats carved with foliated scrolls and the instruments of the Passion. (74 of the original 114 stalls remained before the fire and look to be intact). 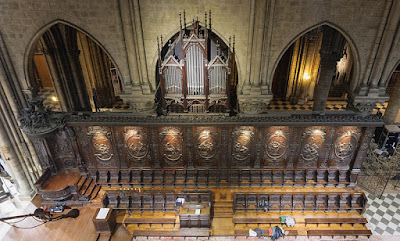 Above the stalls hung eight paintings, again given by Canon La Porte, representing scenes from the life of the Virgin. The paintings were restored to the Cathedral after the Revolution but banished to the Louvre in the 1860s.  The sole survivor is the famous Visitation by Jouvenet (1716) which was returned to the Cathedral in 1947 and rehung in the Chapel St-Guillaume. 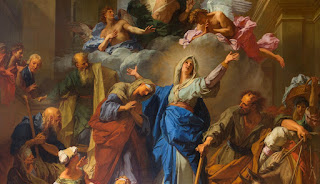 The artist, afflicted with paralysis on his right side, was obliged to paint with his left hand.  He depicts himself, at the side of the Canon La Porte, on the far left of the picture.

For a detailed description, see the  Notre-Dame website:: http://www.notredamedeparis.fr/en/la-cathedrale/linterieur/peintures/la-visitation/

Also in the middle of the choir, before 1760, was a huge six branch candelabra, the gift of Anne of Austria in thanks to the Virgin for the birth of her son, the future Louis XIV.

On either side, back to back and facing the nave, were two altars, to the Virgin and St Denis, which were refurbished at the expense of Archbishop Noailles in 1726. The former contained his tomb.


The replacement of the windows 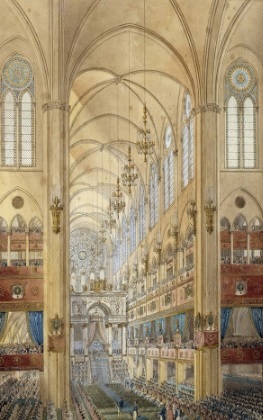 Commencing in 1741, the great windows at the back of the choir and in the nave were replaced with clear ones, by the brothers Pierre and Jean Le Vieil.  The glass was painted with a simple border of fleurs-de-lys on an azure background. In his famous  treatise L'Art de la peinture sur verre et de la vitrerie  Pierre Le Vieil relates how he demolished the last two 12th-century windows in the choir in 1741 (p.24b-25)    Plate VI depicts his design for the window over the sanctuary which featured a triangular cartouche with the Hebrew JEHOVAH in red letters on a gold background enclosed in a circle of blue.


Chapels
The chapels, much more numerous in the 18th century,  were more or less richly decorated according to the fortunes of the confrerie or family to which they belonged.  Archbishop Noailles, for instance,  had the decrepit chapels of St Martin and St Anne  knocked into one to form the Chapel St. Louis, the Noailles family chapel, with resplendent marble altar and furnishings  by Germain Boffrand.  It was here that the reliquary of St Marcel, found behind the altar in 1699, was relocated.


The nave was decorated much more simply. It  is to be noted that the interior walls and vaults were all plastered and whitewashed at this time.  The "Mays", large canvases given annually by the Parisian Guild of Goldsmiths from 1630-1707  hung in the arcades. (Thirteen of the seventy-six were still on display in the chapels of the nave at the time of the fire but hopefully survive.)  Against the great pillar on the right (left in the engraving) was a massive 15th-century status of St. Christopher - the famous colosse de Notre Dame -  which was 28 feet in height.  Sadly, this monster did not conform to 18th-century standards of taste and was destroyed in 1786 when a joist being used to repair the casing of the organ conveniently fell on its head and damaged it.  The nave also featured a large equestrian statue of Philippe le Bel - this one also destined to fall victim to Revolutionary iconoclasm, smashed by a band of sabre-wielding Marseillais.