The Extravagant Imaginings of Monsieur Oufle

Nothing is so easy as to persuade the Credulous into a belief of whatever one pleases; especially when what is propos'd to them falls in with their Prejudices.
(Bordelon, A History of ..M. Oufle, p.195) 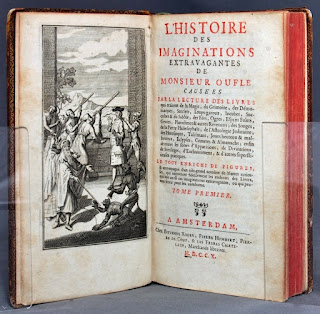 By the opening decades of the eighteenth century, belief in magic and the supernatural was already becoming an object of ridicule. The landmark text is the splendid Histoire des Imaginations Extravagantes de Monsieur Oufle, a comic novel by the abbé Laurent Bordelon published in 1710.

Laurent Bordelon (1653-1730), the chaplain of St. Eustache in Paris, was a literary abbé who moved in aristocratic and intellectual circles which enjoyed royal favour after the Affair of the Poisons.  He was the author of forty acknowledged works and many more anonymous ones. His style was generally not well regarded.  He is said to have declared that "his works were mortal sins";  if so, a wag replied, "it is the public who does penance".  His detractors were quick to condemn his comparison between Monsieur Oufle and Don Quixote.  Nonetheless the work was popular: a  pirated version appeared almost immediately in the Netherlands. There was a reprint in France in 1712 and  a second edition in 1753-54. Translations were also published:  in English in 1711, in German in 1712, and in Italian in 1757. Finally, an abridged version appeared as late as 1789 in volume 36 of La Collection des Voyages imaginaires, songes, visions et romans cabalistiques... edited by Charles-Georges-Thomas Garnier.

The central character of the novel is Monsieur Oufle (an anagram of "Le Fou"), a well-to-do and gullible bourgeois merchant.  A series of episodes lampoon Oufle’s naivety and the absurdity of his superstitious beliefs: he convinces himself he is a werewolf;  he takes on the role of seducer to fulfil his horoscope; he supposes himself tormented by ghosts, demons, and sorcerers. His family repeatedly attempt to bring him to his senses, but never quite manage to shake his irrational convictions.

Monsieur Oufle's credulity is fed by a splendid assortment of books of occult science and demonology:  he "spent a great part of his Life in reading a vast Number of Books which treat of Magick, Witchcraft, Spectres, Phantoms, Hobgoblins, Wanton Spirits, Elves, Fairies, Judicial Astrology, Divinations, Apparitions, Charms, and, in a Word, whatever the most Celebrated Authors had written in favour of a great many Superstitious Practices"  Bordelon even supplies the catalogue for a fictitious library (pp. 19-27 of Part I) in which the  works of the witchfinders jostle incongruously with an array of grimoires, including the Clavicles of Solomon.

The text includes several digressions against superstition, voiced either by Oufle's brother Noncrede or directly by the author himself.  Ample footnotes testify to Bourdelon's erudition.

A series of finely engraved plates, by Jean or Louis Crépy, depict the various adventures of the hapless Oufle, who is always shown with a fool - a Court jester - in tow. 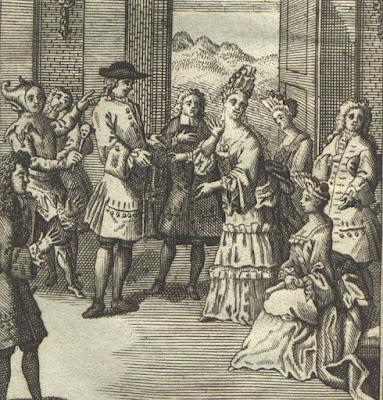 We meet the family.  M. Oufle and his wife have four children, all with suitably silly names: Ruzine, la rusée,  Camèle, who changes her mind as often as a chameleon changes colour, the abbé Doudou, as superstitious as his father; Sansugue, a bank clerk who is greedy like a leech, but for money rather than blood.  There is also an unscrupulous valet and a  sceptical brother, aptly named "Noncrede".

Lycanthropy
One evening, during the carnival season, M. Oufle drunkenly dresses up in a bear costume;  having reread Bodin's Démonologie he imagines that he has been transformed into a werewolf (above left)

Popular folklore
M. Oufle tests his wife's fidelity using a popular superstition involving thistles( above right)  He trims three thistle heads, labels them with the names of his wife and two other women and places them under his pillow. The thistle belonging to his beloved is supposed to"jet out a fresh Sprout and fresh Prickles"   (Mme Oufle substitutes a whole new thistle plant to allay his suspicions.)


Phantoms
M. Oufle  believes profoundly in ghosts - indeed he delivers a whole disquisition in their defence (left). His daughter Ruzine takes advantage of this credulity to tricks him out of a sack of gold, blaming the theft on phantoms.

Astrology ("Judicial astronomy")
Ruzine wishes to marry but M. Oufle believes she is predestined by her horoscope to enter religious orders.  A magic apparition is staged to make him change his mind and agree to the match (left)

Devils and demons
M. Oufle supports his belief in devils in another long speech. Despite the efforts of Noncrede, he persists in his imaginings and even mistakes a carpenter's black dog for a demon (right) 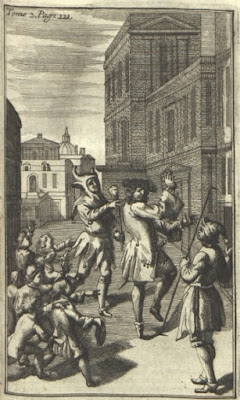 Treasure hunters
M. Oufles avaricious son Sansugue wants to make a compact with "le Démon barbu" to acquire the philosophers stone: "When they spoke to him of Devils that could find treasures, his mouth watered so much that he would not send them away".  When his father refuses to help, Sansugue tries various spells, but in the end reconciles himself to making money in an ordinary way through a career in finance.

Sorcerors
M. Oufle has a constant fear of witchcraft .He imagines his horse has been bewitched and to counter the magic steals the "witch"'s watch.  His explanations earn him the pity of his entire family.

A Witches' Sabbath
At the end of the novel, M. Oufle sets out all that he has read on the subject of witches' Sabbaths. This section is accompanied by a splendid unfolding plate, in which Jean Crépy parodies earlier depictions of the Sabbath, by Bartholomaeus Spranger and the Polish engraver Jan Ziarnko.  It would seem  that the most fearsome of images was now fair game for ridicule......

English translation (1711)
https://books.google.co.uk/books?id=nlIJAAAAQAAJ&printsec=frontcover#v=onepage&q&f=false
A later translation published in Harper's Weekly for 1865,  was used for a reading by Timothy Bateson on Radio 4 Extra
https://www.bbc.co.uk/programmes/b06r9k83

For a lowdown on all the references in the text:
Sarah Nègre - Master's thesis, University of Lyon, 2014
https://www.enssib.fr/bibliotheque-numerique/documents/65219-un-travail-de-compilation-sur-les-superstitions-populaires-des-xviie-et-xviiie-siecles-l-histoire-des-imaginations-extravagantes-de-monsieur-oufle-par-l-abbe-laurent-bordelon.pdf