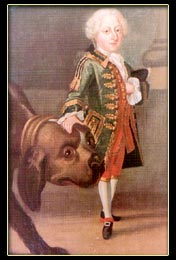 Although there are a number of different  depictions of Bébé, the only definite portrait from life is this oil by Jean Girardet, Stanislas's Court painter.  Sadly, the picture was destroyed in the 2003 fire at Lunéville and is now known only from postcards.  There are also several copies, including one at Lunéville by Girardet's pupil Dominique Pergaut, which survived the fire though it sustained some damage.  The Musée Lorrain has a pastel version by Stanislas himself, which shows Bébé in a light blue coat.
The portrait clearly shows Nicolas Ferry's characteristic long nose and small mouth.
Here is a nice copy, with clothes in the original colours, which recently appeared at auction:
https://www.mutualart.com/Artwork/Portrait-du-nain-Nicolas-Ferry--dit-Bebe/DBCC6F22222D476C
Here is another fine oil painting, sold in 2015.  An annotation specifies that it depict Bébé at the age of eleven.  The face looks like it might derive from the Girardet portrait,  but the clothing reveals  the magnificence of some of Bébé's costumes. The artist Trubenbach is not otherwise documented(?)
A portrait in the collections at Versailles, formerly thought to depict Bébé, now identified as Léopold Clément de Lorraine, Hereditary Prince of Lorraine (1707-1723).
https://commons.wikimedia.org/wiki/File:L%C3%A9opold_Cl%C3%A9ment_Charles_de_Lorraine,_Pierre_Gobert.jpg

There are also few drawings.  Arthur Benoît, who compiled a list of souvenirs of Bébé in 1883, mentions particularly a drawing from life by in the collections of the Musée Lorrain by the chevalier de Bernis (Berny)  (p.225).  Bébé is shown in profile wearing a fur coat.  The artist in question is Pierre-Jean-Paul Berny de Nogent (1722-79) - the portrait is listed among his works on Wikipedia, but I have so far failed to find an image.

The famous lifesize porcelain figure from Lunéville - lost in the fire at the chateau in 2003, but since meticulously recreated.  There are various surviving photos and postcards of the original.
Reconstruction of the lost statue - Faïencerie de Niderviller:
https://www.dailymotion.com/video/x8py79
See: Granat & Peyre  p.23-24. Measurements from the model confirm the abnormal  proportions of Bébé's face.

Wooden mannequin from the Musée Lorrain in Nancy

The Musée Lorrain has various clothes and personal items belonging to Bébé - his coat, cap, spats and a miniature cutlery set.  The costume originally belonged to a Mlle Ouvrard, who was a relative of the Ferry family.

The wooden model is 19th-century.   However, the plaster head is said to be "rigorously and authentically modelled" on the basis of a wax head formerly conserved with the skeleton of Bébé in the Musée d'Histoire naturelle. (See Wikimedia file) 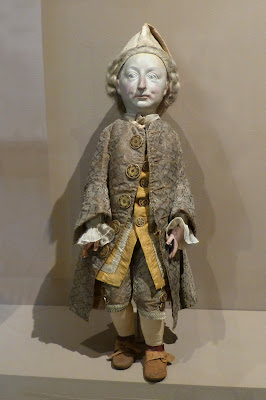 For more illustrations:  Nancy Buzz: "Nicolas Ferry, ou Bébé, nain de Stanislas" . post of 7.12.2018. (Photos of the mannequin from an exhibition at the Galerie Poirel in 2018.)
http://nancybuzz.fr/nicolas-ferry-bebe-nain-stanislas-nancy/

Several life-size wax effigies of Bébé exist, as well as sets of clothes that seem likely to have been made for the models.  In all probability they are the work of the Guillot Brothers, whose workshop in Nancy was famous for its wax figures and tableaux. The models have some claim to be portraits since François Guillot is known to have made moulds from life to create his wax heads. (The bodies were usually made of material and stuffed.)

a. From the Musée Unterlinden

The mannequin is "not made of wax" -  but possibly it is not the original, since Arthur Benoît, mentioned only articles of clothing from the Musée Unterlinden (p.119). These were among several items relating to Bébé donated by doctor Morel, the mayor of Colmar (presumably the same Morel who tried to tan human skin in 1794!), though it was not known where they originated.  Benoît precisely describes the outfit worn by the model, which comprises:

b. At Drottningholm Castle

A second example is documented by Jan Bondeson in his 2004 book The Pig-faced lady of Manchester Square and other medical marvels (p.157 and B & W plate 20) . This mannequin was given by Stanislas to Queen Lovisa Ulrika of Sweden for her private museum in Drottningholm Castle just outside Sweden, and remained in situ after the museum was dissolved in 1803. The figure is just under 3 feet tall and is dressed in a suit of pale blue silk with white stockings and a cravat.  The illustration in Bondeson's book shows an outfit  identical to the one at Unterlinden;  this model is even wearing its tricorne hat secured by a ribbon.

c. From the musée Orfila, Paris

A third mannequin can be found in the collections of the Faculty of Medicine in the University of Paris, (Musée d'Anatomie Delmas-Orfila-Rouvière) which in 2011 were transferred to the University of Montpellier.

This example is identified in several sources as by François Guillot.  In an article of 1889,  a doctor  Liégey recalls having seen it in the musée Orfila as early as 1832.  He transcribes an old note which reveals that the model once had abundant hair, curled and worn in a pigtail. It was dressed as we still see today, "à la mode Louis XV" with the familiar long blue silk coat, light-coloured waistcoat and white cravat. A felt hat is under the arm.  The scarlet breeches are probably an original variant since Benoît mentions another dilapidated pair which once existed at Lunéville. The writer comments:

He is standing, upright and clearly well-proportioned.  His skull is not that of an idiot or a cretin, but seems of sufficient size, well-developed and indicative of intelligence. His eyes are wide and sparking, with  well-defined lashes and brows. His nose is well made and somewhat aquiline; what can be seen of his ears is equally normal; his mouth is small and the chin rounded.  In summary, he has an attractive little head.  The hair, light blond with yellow tinges, is abundant, curled at the sides, ending in a fairly long ponytail.  His little hands are plump, his right arm hanging down and the left bent at a right angle.

It is not know for certain whether this is the same model which Saveur Morand was recorded as presenting  his lecture to the Academy of Science in 1764, but this seems likely. Moreau specified that his effigy was made for Bébé's surgeon, a certain doctor Jeanet, and represented him at the age of eighteen. It was made using Bébé's real hair and wore clothing which belonged to him shortly before his death.  (Sadly most of the hair from the mannequin at Montpellier is now missing.)

There is some muddle about ages and heights, since Liégey's note claimed that Nicolas only reached the height of 70 centimetres, whereas Granat & Peyre calculate he would have measured 83 cm at the age of eighteen. Perhaps mercifully, they haven't been able to measure the waxwork itself, which - to judge by the wrinkled stockings - has in any case shrunk over the years. 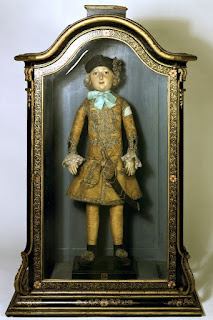 This effigy is known to have been in the  private museum of Duke Anton Ulrich of Brunswick before 1803. The maker is not known (?) but the model seems unlikely to have been taken from life.  The figure is 77.5 cm tall,  has a coloured wax head and horsehair wig - the museum notice specifies that the leather glove  in its hand belonged to Bébé himself.
There is another wax figure documented  at the Hessisches Landesmuseum in Kassel.  Priscilla Grace saw it in storage there in 1980 and reported that it was "identical with the one in Brunswick".(Metropolitan Museum Journal, vol.15, note 19)