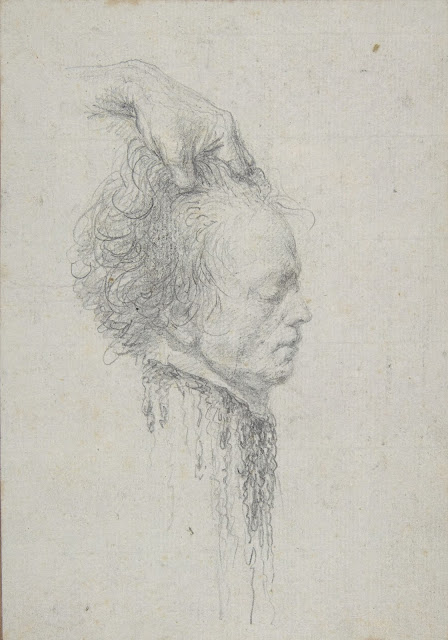 Metropolitan Museum.
Severed head, said to be that of Maximilien-François-Marie-Isidore de Robespierre (1758-1794), guillotined July 28, 1794 (10 Thermidor, An II)  .
16.5cm x 11.3cm.
https://www.metmuseum.org/art/collection/search/334240
The more you look at this little drawing by Vivant Denon, the more disconcerting it becomes!  Denon's intention is illusive and the meaning of the iconography ill-defined.  Moreover, the portrayal of the fallen Robespierre is compelling and oddly sympathetic.
Denon's relations with Robespierre
What was Denon's attitude to Robespierre?   Aulard, interestingly enough,  characterised him as "Robespierre's favourite painter".  Marie-Anne Dupuy-Vachey, in her study of the Revolutionary "heads"  finds his political position "obscure" but refers to Denon's possible gratitude for the protection he had received from David and the Jacobins. 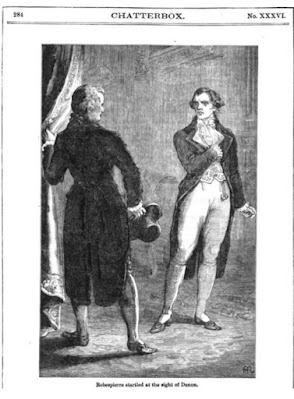 Denon's actual direct dealings with Robespierre  are reduced to a single anecdote.
In December 1793 Denon returned to Paris. Although his properties in Burgundy were restored to him, he could could not touch the income and was dependant financially on his work as an engraver.  In the months before Thermidor, he was obliged to ingratiate himself with the Revolutionary authorities. He was invited by David to engrave the Oath of the Tennis Court, and also worked for him on designs for the new official costume commissioned in May 1794.
It was in connection with the latter, that Denon met Robespierre.  Years later he recounted to his friend Pierre-Alexandre Coupin, the editor of the Magasin encyclopédique, how he had waited for him in the antechamber of the Committee of Public Safety.  Robespierre had at first challenged him in a petrifying tone ("d'un ton a lui pétrifier")  but rapidly softened and invited him in; the two then spent the night in conversation. Robespierre had been at pains to emphasise his good taste and regard for the arts. To Denon, years later, the episode seemed "like a dream"
.
The anecdote says more about Denon and his penchant for self-advertisement than it does about Robespierre, but it does preserve an echo of the complexity of the man.  It is to Denon too, that we owe the memory of Robespierre in the Tuileries Gardens in his rose coloured waistcoat.
Here is the story in an English version:
. 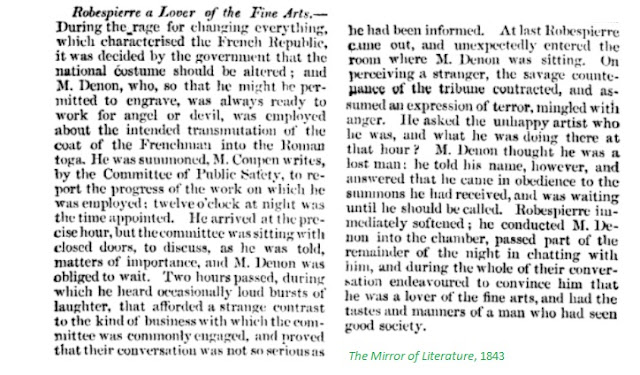 The Iconography of the Metropolitan Drawing
Although Denon placed the drawing among his Revolutionary "heads", perhaps with a view to printing, the Robespierre is evidently not a portrait from life.   How could it possibly represent the real man, hustled bloody and mangled to the guillotine?  The features look as though they are based on the death mask which we know that Denon possessed.

Alan Wintermute writing in 1989 suggested that Denon's composition echoes the famous engraving of Louis XVI by Villeneuve (which in turn quotes Cellini's Perseus with Medusa). More recently, the American scholar  Regina James has argued that the model is a painting of John the Baptist by Bernardino Luini, purchased by Louis XIV in 1671 for the Louvre (left)
In a striking design for an engraving, now lost, Denon arranged his "heads" under a garlanded guillotine blade: here the Renaissance-style sleeve of the executioner is clearly visible:
The meaning of this montage remains elusive: the cruciform guillotine seems to radiate a celestial light but the quasi-religious imagery does not lead us very far. According to Regina Janes:

Ironic and oddly tender, Denon's is a curious tribute to the new faith of the rights of man.  The guillotineur lifts man up in hope and aspiration, through blood shed for others. Yet here the hope had been in man, who destroyed others and himself in his hope.  Dying for the guillotine's meanings, they also died by it.  To Robespierre's Baptist, who is the Christ? (p.117)

1. Portrait of a young man. 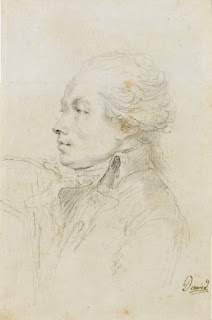 Christie's, Paris: "Tableaux et Dessins Anciens et du 19ème Siècle", 23rd June 2009. Lot 96
https://www.christies.com/lot/lot-dominique-vivant-denon-givry-1747-1825-paris-portrait-5220320/
This drawing, was sold by Christie's in Paris on 23 June 2009 as a "portrait of a young man" by Denon. It is signed "David" and has a label on the back of the mount which reads:
"This sketch of Maximilien Robespierre was made in the prison of La Force...by Louis David...Louis David gave this sketch to the Duchesse de Tourzel...".
The portrait is almost certainly by Denon. I used to be convinced was Robespierre, but now I am not so sure......
The Lot Essay suggests puts forward a number of considerations which support the identification with Robespierre:
However - as Marianne Gilchrist commented on a previous post of mine  -  the subject is just not that much like Robespierre: he is too chubby and lacks Robespierre's characteristic turned-up nose.   I used to think the coat and dressed hair identified him, but I have since discovered other portraits by Denon with similarly-dressed figures.  Here, for example, is the cellist Jean-Louis Duport:

2. Robespierre "on the day of his execution"

This drawing in the Morgan library, is from the collection of Victor Sardou. Nowadays, the ascription to David is usually rejected; but there is no reason to assign it to Denon either.  The sketch of Danton sold by Sotheby's in 2015 is intriguingly similar (though it is in pen-and-ink rather than pencil). 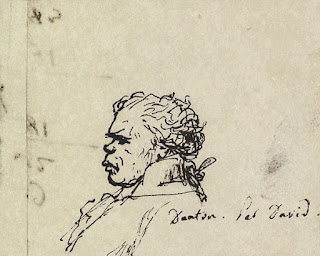 3. Caricatured portraits of Robespierre and Danton 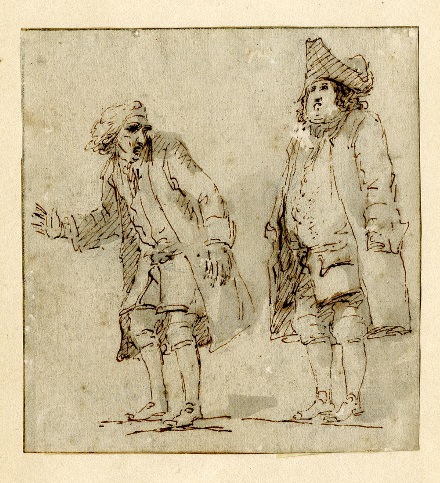 https://www.britishmuseum.org/collection/object/P_2017-7067-19.
This intriguing sketch by Vivant Denon  was bequeathed to the British Museum in 2017 by the  Swedish art historian and collector Sven Gahlin.  There is no other information.  The figures, in their long waistcoats and loose breeches, look more like early 18th-century characters than Revolutionaries to me.