This beautiful and sympathetic Revolutionary portrait  by Pierre-Nicolas Legrand de Sérant, was acquired by the Museum of the French Revolution in Vizille in 1989.  Its subject, Joseph Cange, and the story of his charitable actions, briefly fired the imagination of Thermidorian France, which was hungry for sentimental tales of reconciliation and humanity as a counterpoise to the violence and treachery of the recent past.

Cange, who was born in Sarrebourg, Lorraine in 1753, was a clerk at the prison of Saint-Lazare  during the Terror.  The story goes that, he was so moved by the poverty of the family of one of the prisoners, that he decided to share his meagre resources with them.  With commendable modesty, he made the woman and her three children believe that the money came from the imprisoned father (In some versions Cange, whose total fortune was 100 livres,  gave 50 livres to the wife supposedly from her husband and another 50 livres to the prisoner supposedly from his wife).  After Thermidor, the prisoner was freed and hastened to make the identity of his benefactor known. Cange became a minor hero and had several poems and plays written about him.

A second painting,  by Legrand, now in the Dallas Art museum, shows the emotional reunion of the former prisoner with Cange and his family:

Pierre-Nicolas Legrand de Sérant
A good deed is never forgotten ("Une bonne action n'est jamais oubliée") 1794/95
Oil on canvas  63cm x 80cm
Dallas Museum of Art (1989.134.FA)
https://collections.dma.org/artwork/4314125
The identity of the recipient of Cange's kindness is not known for certain.  In the plays he is given only  a generic name,  either "Durand" or "Georges". However the playwright Georges Duval, in his Souvenirs thermidoriens, identifies him as a certain Thomassin, a plumassier (that is a dealer in feathers) in the rue du Petit-Lion-Saint-Sauveur.  According to Duval, the man's only crime was to have laughed at Grelat, the president of the Revolutionary Committee of the section of Gravilliers, who was a hunchback and cripple (p.5,nt).  There seems no reason to doubt Duval  though, if  Thomassin financed Legrand's pictures, he cannot have been the humble tradesman depicted in the plays. Souvenirs thermidoriens - Google Books

There is no information on the circumstances in which the two pictures were commissioned.  The Dallas painting was exhibited in the Salon in the Summer of 1796 and Cange's portrait was reproduced in high-quality engravings - by Bonneville for vol. 2 of  his "Men of the Revolution" and by Beljambe who added a patriotic bonnet. The Moniteur for 16 Nivôse III (5th January 1795) , records that Beljambe's engraving was presented to the Convention.

The recent acquisitions records for the pictures do not clarity the provenance a great deal.  According to Tom Gott of the National Gallery of Victoria in Melbourne:  "Both paintings were probably commissioned by 'Georges' , the beneficiary of Cange's generosity, since they were sold in 1989 by descendants of his godson, whom it has not been possible to identify with any greater clarity".  The group painting was sold by the Colnaghi Gallery in New York  which exhibited it shortly before its purchase by the Dallas Museum in 1989.  Guide to the exhibition "Napoleon:  Revolution to Empire".  National Gallery of Victoria, Melbourne, 2nd June-7th October 2012, p.66 Google Books

Whilst the portrait preserves an authentic sense of the man himself,  the second painting tends to subordinate Cange as an individual to a wider political message:

According to Amy Freund, the Dallas canvas is "a Greuzian scene of gratitude", which reveals the eagerness of portrait commissioners to insert themselves into the Revolutionary narrative.  Details like the tricolor cockades and liberty bonnet define the context.  The image of "the good sans-culotte" is asserted as a counter to the aberrations of the Terror;  the gratitude of the bourgeois family provides a model of universal fraternity.

The historian of Revolutionary fashion, Aileen Ribeira, sees the unity of the two men as more apparent than real.  Although they both wear a cockade,  the fashionable greatcoat and smart beaver hat of "Georges" contrasts with the outmoded Revolutionary costume of Cange.  In an era where  political allegiance was expressed through dress, "men like Cange were past history".

The literary and theatrical representations of Cange, though sympathetic, give the same sense of a hero who is absent from his own story.  His position recalls the sentimentalised  heroes and heroines of the last years of Ancien Régime rather than the working class heroes of popular Revolution.

Cange is presented to the Convention

The first mention of Cange's story occurs in the official record of the Convention.  On 16th October 1794,  a deputation from the Lycée des Arts ("Lycée de la Commune de Paris"), a patriotic society which aimed to advance knowledge and education, presented Cange in person to the assembly and  read out a poem relating his act of generosity by the playwright Michel-Jean Sedaine.
It was also noted that Cange,himself the father of a family, had recently taken on the three orphaned children of his sister-in-law, whose husband had been a soldier of the Republic.
Cange was invited up to receive "fraternal accolade"; the Bulletin of the Convention recorded the president's words, "We applaud Cange's generosity. We admire the virtue that characterises him".  His case was also referred to the Comité des secours which awarded him a small pension.
Archives parlementaires, Séance du 25 Vendémiaire. https://www.persee.fr/doc/arcpa_0000-0000_1995_num_99_1_17698_t1_0201_0000_1

Cange's story was above all a phenomenon of the newly re-opened theatres of Paris.  The new sentimental drama of the era often featured moralising episodes of this sort from the recent past, "les faits historiques", a genre which reached its height of popularity in 1794. There were at least eight  different productions on Cange in last months of 1794. The theatres of the Cité-Variétés, the Opéra-Comique and the Amis de la Patrie et de l'Égalité all exploited the subject.  The first play, Cange, ou Le commissionnaire de Lazare by Marin Gamas, opened to great acclaim at the Théâtre de la République on 30th October, followed a day  later by the production of Pierre Villiers and Armand Gouffé at the Théâtre de la Cité.   Duval, who was one of Gouffé's collaborators,  reports that they had been together  in the café Cuisinier when the latter chanced upon the verses of Sedaine. Four days later the play was written and in rehearsal; by the first days of the next décade it was on stage. The actor Tiercelot took the part of Cange, which he played with his trademark Auvergnat accent.  Both playscripts were printed and sold. These first two plays were prose works but others included songs and music: the most ambitious, which appeared at  the Opéra-Comique, was Les détenus ou Cange, commissionnaire de Lazare by Benoît-Joseph Marsollier, with music by  Nicolas Dalayrec.  Simon Chenard appeared as Revéche, concierge of the Saint-Lazare prison.

Despite some elements of comedy, the plays all had strong political objective, to defend the virtuous  Republic and repudiate Robespierre and the Jacobins.  See for example, the closing speeches of Les détenus by Marsollier:

Georges :  Men like Cange...show us that in the least fortunate classes, one generally finds belief in humanity, kindness and respectable virtues...As if Nature wishes to console humanity for the appearance of malevolent beings who... hide behind a mask of of patriotism, the corrupt heart of a hypocrite and tyrant." (Les détenus, p.48)

For a selection of patriotic speeches from the various plays, see  Ernest Lunel, Le Theatre et la revolution (1910), p.244-246.  Le theatre et la revolution - Google Books
The performances were frequently made more emotive by the presence of Cange himself in the audience. It is recorded that after the first performance at the Théâtre de la République, he and his wife were invited on stage, and showered with applause by the audience, which had been moved to tears;  the same thing happened at the Cité-Variétés;  at the Opéra-Comique, Chenard saluted them in their theatre box (See Tissier, Les spectacles à Paris pendant la Révolution (1992) p.76,  note 17; p.141, note 47).  There was a strong element of calculation in this -  Duval notes, with some plausibility, that the naive hero  allowed himself to be manipulated by unscrupulous theatre directors seeking only to boost their receipts.
Despite the adulation of the theatregoers,  the Republic did not treat Cange with any great generosity.  He and his family continued to live in poverty.  He was found menial employment as an office messenger in the Commission of Public Instruction, a post which brought little money and possibly undermined his health.  To their credit, well-meaning commentators soon complained that the theatres owed him a rightful share of the profits. The abbé Grégoire and the young writer Louis-François Jauffre befriended him, as did Félix Nogaret, who wrote poem in his honour.    As reported by Laufret, we hear the authentic voice of Cange for the first time; a simple man,  proud of  his virtue and independence, he stubbornly refused to countenance the need for reward.
Cange died shortly before 11 Nivôse Year IV (1st January 1796) leaving a widow, and six children; the family was completely forgotten by officialdom.  Boissy d'Anglas reprinted his poem "De  la bienfaisance" for the widow's benefit as late as 1825.  Cange's  son served in the Napoleonic army and, after 1815, ran a modest café in Vincennes. 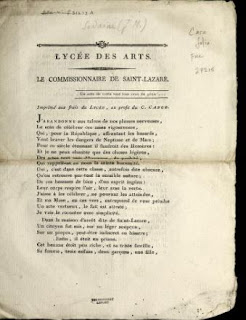 The generous deed of Cange is one of those that give the greatest pleasure to recount, because it occasions no regret, and the character that gave rise to it showed  only the the purest of sentiments... Cange could not have expected any other reward than the happiness which virtue brings to those who practise it.  He neglected nothing to ensure that his deed went unremarked.  And if it was, what recompense could he have expected?  The couple were not in a position to pay him back.  The husband was on the point of dying on the scafford;  the wife in a state of cruel poverty, without any resource.  Almost daily Cange saw those whom he had helped take the memory of his benevolence to the grave...He was generous enough to release from the burden of gratitude those who might have been humiliated to have received  help from a man of such an interior class.

The Convention, informed of this fact, in a time where virtue was not without influence in it, charged one of its committees to investigate and make a report.  After they investigated, they awarded this virtuous citizen a monetary reward and an honorable mention.  A theatre hurried to produce a play on the subject;  M Sedaine produced a play in verse, and public opinion honoured the Commissioner of Saint-Lazare with its approval and esteem. During this time he gave further proof of his virtuous generosity;  his brother had just died in the army, leaving three small children.  He adopted them as his own, although he already had four children himself.  He died shortly afterwards, leaving to the family no other legacy than love of work, and the virtue that makes it bear fruit. His wife, who became infirm, having acted as a doorkeeper in the same house for twenty years, asked for admission to one of the hospicies run by public charity in the capital; but she has not yet obtained this.One of his sons, dismissed in 1815 from the army, where he reached the rank of lieutenant...was obliged, in order to  survive, to establish a café in Vincennes; he lives happily as do all those who have memories of virtue. However,  the government ought  not to abandon him, nor his mother, now in her seventies.
Boissy d'Anglas Le Commissionnaire de Saint-Lazare (1825) NOTE.