The well-to-do lady's "toilette" attended by friends, family members, servants and tradesmen is a strong theme in French art and well-attested in reality. No doubt took its cue, however distant,  from the royal levee, and reflected the leisure and ease of a nobility who could confidently expose their private routines to their associates and inferiors.  The aristocratic bedchamber or dressing room could function as semi-public space - see above (and the illustration on the Choiseul snuffbox) .  Earlier habits were easily assimilated later Enlightenment values of domestic intimacy, informality and emotionally charged friendships.


Here is Lancret's "Lady at her toilette", identified, almost certainly erroneously, as the society hostess Madame Geoffrin.  The probability is that the piece was intended to represent "Morning" in a conventionalised set of "Times of the Day", similar to the set by Lancret in the National Gallery.

This is the corresponding "Morning" scene from the National Gallery. A young woman seated at her toilette pours tea for the visiting abbé, her gown parted to reveal an enticing naked breast. It is hard to decide how risqué this is intended to be; the bare breast is a standard feature of "toilets of Venus" and Lancret was fond of satirising mythological scenes.  Presumably the picture is intended to be amusing rather than censorious.  Exhibited in the Salon of 1739.


This is the most reproduced of the toilette scenes by Jean-François de Troy: a woman standing half-undressed in her boudoir: as her maid helps her dress, she leans over to show a miniature to the gentleman sitting nearby. Although there is an implied intimacy between the two, the composition is again not sexually charged.  In fact Monsieur seems remarkably unfazed by the sight of those blue silk stays.

De Troy's most highly regarded pictures were a pair of portraits, again themed on the passage of time, "before" and "after" the ball, which were commissioned by Louis XV's finance minister Germain-Louis de Chauvelin and exhibited in the Salon of 1739.  Again the presence of the opposite sex in the lady's dressing room, albeit suitably agog with admiration, is comfortably accepted.  The emphasis is on the close conspiratorial nature of the group; we are invited to speculate not so much on illicit intimacies as on the pleasurable gallanteries of the ball, to which we, as mere spectators, have not been privy. 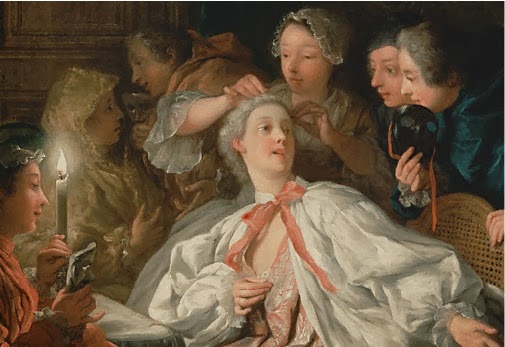 The sociability of the toilette was never, of course, without its critics; it smacked of social pretension, wilful idleness and conspicuous consumption, to say nothing of the moral ambiguity of appearing in careless deshabille.

From the mid-century criticism gained momentum; as one feels did conscious exploitation of supposed aristocratic insouciance among a widening social spectrum of women themselves.   It seems that the rite of the toilette hardened into a definite two stage process, carefully stage managed, to hide the unsightly dressing and powdering of hair and application of cosmetics. Only the final touches were open to public view.

To male eyes there were clear overtones of flirtation.  A mid-century writer describing the daily life of a woman de bon ton explains that she arises only very late in the morning and then spends the rest of the day at her toilette whilst receiving visitors;  such a lady, he adds, will be scantily clad, "in a state of undress that is more than ordinarily seductive".  (Pierre-Joseph Boudier de Villemert, L'Ami des Femmes (1758), quoted in Posner p.136).  Madame d'Epinay remarked that a lady en négligé will be "less beautiful" than when finely dressed, "but more dangerous....less elegant, but more appealing".  Mercier writing in the 1780s, comments squarely , "the second toilette is nothing but a game invented by coquetry"


The move towards titillation is evident in the toilet genre scenes of Boucher.  The male admirer disappears entirely from the picture - it is now the spectator who plays the role of voyeur at an exclusively feminine rite.  When the gentleman reappears, as in productions by Boucher's son-in-law Pierre-Antoine Baudouin, the subtext is evident. La Toilette (1765) shows a young woman being laced into her stays by a maid.  A gentleman visitor sits in front of her, his sword pointing at her outstretched leg.  The symbolism is clear and the expressions say it all!

Kimberly Chrisman-Campbell, "Dressing to impress: the morning toilette and the fabrication of femininity"
in Paris: life & luxury in the 18th century by Charissa Bremer-David et al. Getty Museum 2011 [Extracts on Google books]

Donald Posner, "The 'Duchesse de Velours' and her daughter: a masterpiece by Nattier and its historical context", Metropolitan Museum Journal (1996), 131-142.
http://www.metmuseum.org/pubs/journals/1/pdf/1512976.pdf.bannered.pdf

Here is the very informative notice on Lancret's Toilette de Madame Geoffrin  which accompanied the painting's sale at Christie's New York in 2006
http://www.invaluable.com/catalog/viewLot.cfm?afRedir=true&lotRef=kcbczgj4n1&scp=c&ri=48
(The picture was resold at Sotheby's in Paris  in 2010, with the identification of Mme Geoffrin reinstated..)

A Lady at her toilette is one of Lancret's most successful forays into a genre more closely associated with Jean-François de Troy and later François Boucher, the tableau de mode or fashionable scene from daily life. Lancret's painting meticulously chronicles the morning routine of a wealthy lady of fashion: in a sumptuously appointed Louis XIV-style bedroom, a pretty young matron sits at her dressing table, gazing into a red lacquer mirror, as she applies a mouche to complete the elaborately powdered and rouged maquillage that her maid would have just completed. Indeed, the lengthy ritual is not yet done - she still wears the white peignoir, or powdering mantle, around her shoulders that protects her clothing from falling powder, and her afternoon dress sits on the frame on which it is stored awaiting the return of her maid who will fasten her into it. The servant has presumably shown discretion by stepping away to allow the visiting abbé to share with her lady in confidence the contents of the letter he reads.

Although the painting has traditionally been identified as a depiction of the celebrated patroness of the arts, Marie-Thérèse Rodet, Madame Geoffrin (1699-1777), this is unlikely to be the case. Mme. Geoffrin is not known to have had any association with Lancret and her career as a supporter of the arts was confined to her long widowhood. By her own acknowledgment, she began to collect art only in 1750 - nearly a decade after Lancret's death - and her commissions went to younger generations of French painters, notably Boucher, Hubert Robert, Joseph Vernet and Vien. Furthermore, the pretty, pert model in Lancret's painting bears little resemblance to the known appearance of the sharp-witted but plain, long-faced salonnière. (For her portrait, see C.B. Bailey, Patriotic Taste: Collecting Modern Art in Pre-Revolutionary Paris, New Haven & London, 2002, p. 63, fig. 52.)

In subject and style, Lancret's painting is similar to a small copper panel that is one of a series of four allegories of the Times of Day, now in the National Gallery, London. (See M. Tavener Holmes, Nicolas Lancret 1690-1743, New York, 1991, cat. no. 20, pp. 90-3, pl. 20a.) The scene representing Morning is, essentially, a more risqué version of the present painting: in it, a pretty young woman seated at her toilette pours tea for the visiting abbé, who stares in amazement at her breast which has been exposed - inadvertently? - by the opening of her peignoir; observing this comic moment, her maid smiles slyly. In both paintings, Lancret has lavished attention on accurately reproducing the picturesque details of the protagonists' costumes in addition to the furnishings, interiors and accoutrements of fashionable life in contemporary Paris. Following the lead of Jean-François de Troy, who painted similar subjects in 1734 (Rothschild collections, Pregny; Nelson-Atkins Museum of Art, Kansas City), it was Lancret who had, by the late 1730s (the period from which both the London and Segoura paintings appear to date), established the fashionable toilette as a legitimate subject for popular genre painting, though it was Boucher who most frequently exploits the theme in genre scenes and portraits throughout the 1740s and 50s.

Although nothing is known of its earliest history, it seems likely that A Lady at her toilette was intended to be understood as an emblem of Morning and, like the copper in London, might have been intended to serve as one in a set of four Times of Day. Since the late seventeenth century, a toilette scene had become the standard representation of Morning in genre depictions of the Times of Day, generally with a depiction of a luncheon for Midday; game playing or sewing indicating Afternoon; and attending or returning from a ball serving to signify Evening. Indeed, in 1746 Boucher created his celebrated toilette scene, The Milliner (Nationalmuseum, Stockholm), to represent Morning in a proposed suite of four Times of Day for the Crown Princess Luisa Ulrika of Sweden. Although the prominently placed Boulle wall clock in Lancret's picture is nearly striking noon, it clearly indicates that the scene is still set in the morning hours.

The present painting was originally shaped and was no doubt made as a decoration that was inserted into the boiserie paneling of an unidentified lady's boudoir. The corners were made up at a later date to regularize the format