The Duchess of Velvet

Still on the theme of "la toilette", among the most regarded works by Jean-Marc Nattier, is this splendid double portrait, exhibited in the Salon of 1750, of Madame Marsollier, wife of a fabulously wealthy Parisian silk merchant, with her only daughter Marie-Thérèse, later marquise de Chamilly.  Despite her fine taste, Madame's social pretensions caused her to be dubbed the "Duchess of Velvet".
﻿﻿﻿﻿﻿﻿﻿
﻿
Portraits of women at their toilette, engaged in the rituals of beautification, had long been popular in France, with varying degrees of allusion to the toilet of Venus as a convenient pretext to depict aristocratic ladies in alluring deshabille. In this strand of 17th and early 18th-century thought a certain boldness in the display of physical charms could be construed as a mark of sophistication, whilst a casual state of dress denoted a confident natural superiority.

Nattier was a particular master of the mythological and allegorical portrait piece, so Madame Marsollier must have deliberately opted for realism; certainly she might have chosen to have herself depicted as Flora or Venus, or Diana with nymph. That the fashion for such conceits was rapidly waning owed something to Nattier himself who in the 1748 Salon exhibited, to acclaim, his remarkably unceremonious portrait of Queen Marie Leszcynska, wearing everyday clothes and reading her Bible. However, there is just enough hint of Venus or Astrea about Madame's pose to underline her famous beauty. 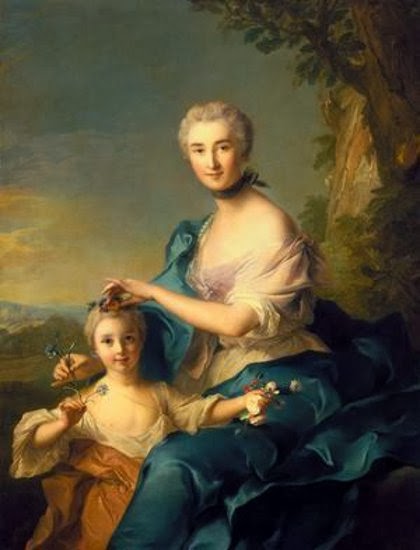 Of note too is the openly affectionate and intimate relationship depicted between mother and daughter - novel for the time though prefigured in Nattier's much earlier 1733 double portrait of Madame Crozat de Thiers and her daughter. Mlle Marsollier, an only child, was course a particularly cossetted little girl.

The message to be gleaned above all from the painting is one of richness and luxuriant ease, signalled by both the surroundings and details of dress.  Thus David Posner:  "Madame Marsollier is a statuesque figure in her undress: a revealing chemise and blue and white draperies clasped with a jewelled belt.  He hands and those of her daughter hold the two figures together, while their glances draw them apart.  The gilded mirror, ewer, and boxes are expensive objects of high quality and elegant design.  The marble arches in the background suggest a palatial interior, while the abundant velvet drapery tied with gold tassels endow the composition with dignity and gravitas."

Born Catherine Leleu, Madame was the daughter of an attorney in the Royal Household and apparently felt she had married beneath her. She disliked being reminded of the source of her husband's riches. Here, noting her premature death in 1756, is the duc de Luynes:

Memoirs of the duc de Luynes:
"A few days ago a Madame Marsollier died in Paris.  She was the daughter of M. de Leu, procurator for the domains and woods of the King; she was very well known for her beauty. Her husband was a wholesale dealer in silks who afterwards bought a position as secretary of the King.  Madame Marsollier is survived only by one daughter, who will be very rich. One of the conditions of Madame Marsollier's marriage was that she would never have to enter her husband's shop; she even avoided the rue Saint-Honoré so she wouldn't have to see the shop;  that didn't prevent people from calling her the duchess of Velvet".

The Marsolliers - a commercial dynasty
Until recently the duc de Luynes's bon mot was just about all the accessible information regarding the Marsollier family and the "Duchess of Velvet".  Now, the careful research of Matthieu Marraud has restored to us something of the world of this close-knit and powerful dynasty of merchants. The ethos which bound them together and committing them to business was at odds with Madame's aspirations and reflects the subtlety of the social relations and tensions of the time.  Madame's husband, René Marsollier (1702-63) was the third of that name to deal in the sale of imported silks from an establishment in the rue de la Lingerie, premises which, though substantial, backed onto the Cimetière des Innocents in the heart of the cramped medieval streets of Paris's commercial district.  It is clear that the shop itself, its name and sign ("le panonceau") were key components in the identity of the business; indeed it was an acknowledged requirement that, however wealthy they might be, members of the family actively engaged in the trade would live on the on the premises.

On the death of René II in 1731, our René had inherited, at the age of 29, what was already an extensive silk trade directed towards aristocratic clientele and the royal household itself. Significantly, one of his first acts was the purchase of the charge of secrétaire du roi - an ennobling office de robe - not for himself but for his younger brother.  This provided his sibling with a secure income whilst avoiding having to partition the family business.  It is to be observed that securing dynastic continuity in this way mudded the social significance of ennoblement:  "This practice brought into the second ordre some people who did not respond to the appeal of elite distinctions.  Their daily deeds did not ratify the hierarchical predominance of one profession above another" (Marraud, 2009, p.217)

René III was not, however, immune from social aspirations - that much is clear from his choice of marriage partner from outside the confines of closely interrelated Parisian merchant dynasties.  At his marriage in 1736 he renounced joint ownership of goods with his new wife not, as the duc de Luynes suggests, to spare her the sight of the shop, but to forestall any future claims on the business by her relatives.  In the same year he entered into a long-running association with a maternal uncle Augustin Nau who moved into the rue des Lingeries with his wife.  It was not until 1745 that René secured his own ennoblement as secrétaire du roi and moved out to a smart hôtel in the rue Coquillière - much grander but still within the same parish of Saint-Eustache. He still owned the majority of the assets and a controlling interest. Now at last presumably his wife could give full expression to her aspirations in suitably luxurious surroundings.

On his death in 1763, René III left an "incroyable patrimoine" in excess of 1500 000 livres, a third of which was tied up in the business.  This marked the end of the family's active involvement;  the Naus were obliged to buy out his daughter who had again married outside the merchant clans, to Lorimier de Chamilly, intendant général des écuries du roi.  They continued to trade from the rue de la Lingerie.  Indeed in 1788 the duc de Montmorency was still buying silk costumes for his son's marriage at an establishment which called itself "Nau et Marsollier" -  representing a continuity in trade of over a century.

A note on the provenance of the painting

The provenance notes in the Metropolitan Museum catalogue show clearly the descent of the painting in the family of the marquise de Chamilly. The identity of the sitters is further corroborated by an annotated drawing of the painting in the Schlossmuseum Weimar.  It is quite a surprise, therefore, to find it reproduced in a 1903 Christie's London sale catalogue, under the name of "Comtesse de Neubourg and her daughter". It is possible the painting could have made its way into a British collection in this period but who is the comtesse de Neubourg?  The Met. has Neubourg as a title belonging to the Marsollier family but there is no sign of it at all in the documents and genealogies in Matthieu Morraud's researches.  If it is simply a case of mistaken identity, there is no obvious alternative candidate.

Catalogue of the sale of Reginald Vaile at Christie's London in 1903: No 46:  "A portrait of the comtesse de Neubourg and her daughter".  Illustrated and without doubt the same painting.
https://archive.org/stream/frenchighl00chri#page/n43/mode/2up

Donald Posner, "The 'Duchesse de Velours' and her daughter: a masterpiece by Nattier and its historical context", Metropolitan Museum Journal (1996), 131-142.
http://www.metmuseum.org/pubs/journals/1/pdf/1512976.pdf.bannered.pdf

The relevant pages of works by Matthieu Marraud can be viewed as extracts on Google Books: