Watch this space!   On 20th November the BBC Four is repeating Dr Richard Clay's "The French Revolution: Tearing up history", which was first shown in May as part of the Beeb's 18th-century season. Presumably it will also reappear (however fleetingly) on i-player.  At the moment, there is little evidence of its existence on the BBC Website beyond a single clip of a whole one minute and 14 seconds.  Which is an awful shame, because it was an innovative and visually exciting documentary.

Richard Clay's film was an independent production, by Furneaux & Edgar Productions, and, even in the comparative safety of BBC Four, a daring inclusion in the 18th-century season - which featured mostly Handel and Lucy Worsley among the Georges.   Dr Clay always identifies himself as "an art historian".  He is the author of scholarly articles and recently a volume in "Studies on Voltaire and the Eighteenth Century", and his views are much more sophisticated and nuanced than they come across in an hour-long TV documentary.  But Whippet-thin and black-coated, his very persona shouts Left-wing intellectual.(I even caught a glimpse of him smoking in the vimeo trailer)  And in this case appearances do not deceive...

Here are some notes to accompany the programme.  My primary intention is not to analysis Dr Clay's arguments,  just to identify and explain some of his locations and passing references.

00:01 Dr Clay begins by explaining that his theme is "iconoclasm" in the French Revolution, the destruction and transformation of art, buildings and symbols of power, a  "history of art from below".

02:03:  At Versailles. The gods do not smile on Richard in bucketing rain outside "the ultimate symbol of royal power" and the seat of government.  He quickly take shelter in the Royal Tennis Court where the Revolutionaries ushered in modern history by proclaiming the  sovereignty of the people.
http://www.versailles-tourisme.com/en/discoveries/heritage-palace-city/muste-sees/royal-tennis-court.html

07:28:  Art as power: Dr. Clay goes to the Musée Cognacq-Jay to demonstrate that art as aesthetics was the prerogative of a leisured aristocracy (and to view a couple of delectable Bouchers on the way.)
http://www.museecognacqjay.paris.fr/  .

10:04 Art as power: Off to the Church of St-Roch - a true Rococo monster -  to illustrate religious art as opium of the people.  And another BBC first - an admiring quote from Diderot "the great philosopher of the 18th century".
Here are some pictures of the interior of St-Roch:
http://www.patrimoine-histoire.fr/Patrimoine/Paris/Paris-Saint-Roch.htm

16.55: The Storming of the Bastille. No surprises here; the Revolutionaries turned the hated royal prison into "an emblem of freedom".  Richard views the few stones that remain, on display in the Bastille Metro station.
http://archaeology-travel.com/travel-reports/where-is-the-bastille-today/

18:55: Now outside Paris to a warehouse of  the Musée départemental des Antiquités de Seine-Maritime in Rouen.
The Commune authorised Palloy to send out plaster models of the Bastille to all 83 departments - cue entrance of Bastille model wheeled in in big blue plastic crate. [I wonder why they didn't film the one on display in the Carnavalet; maybe they weren't allowed?].
http://fr.wikipedia.org/wiki/Mod%C3%A8les_r%C3%A9duits_de_la_Bastille
http://curiousrambler.com/2014/07/20/pierre-the-patriot/

21: 36: Church of St-Sulpice
Dr Clay identifies the first act of officially-sponsored iconoclasm as the melting down of "Our Lady of the old tableware", a massive statue of the Virgin by Edmé Bouchardon rumoured to have been cast from silver that Languet de Gercy extorted from his parishioners.

25: 05: Attacks on the Church:
A single church wall in Paris tells its story of Revolutionary destruction: the official BBC clip covers most of this: "It is odd how quickly the familiar can become strange"  http://www.bbc.co.uk/programmes/p01y3ff3# 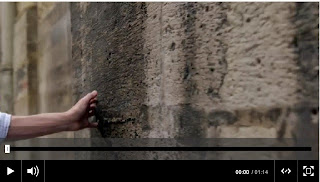 The Church is St Louis-en-l'Île:
See http://www.saintlouisenlile.catholique.fr/spip.php?article334#.VGUMMvmsU68
"In the French Revolution, the church lost its organ and almost all its furnishings. The statues in the transepts of St Geneviève and the Virgin Mary, by François Ladatte, survived only by being transformed into statues of "Liberty" and "Equality".  The curé of the parish since 1785, Coretin Coroller, took the Civil Oath but that did not prevent the closure of his church in 1792.  In 1792 all the metalwork was removed and taken to the Mint.  The church became a "depot littéraire" and was subsequently sold as national property on 31st July 1798 for 60,000 francs to a certain Fontaine; interestingly, the buyer left it at the disposal of Father Coroller who had taken refuge near Notre-Dame and continued to take services and exercise his ministry.  Under the Napoleonic Concordat, he retracted his oath and was reinstated as curé of his parish."

29: 23:  Back to the historical narrative and the fall of the monarchy.  In Versailles the weather has cheered up marginally.  A print in the Bibliothèque national shows boys climbing up to blindfold the statue of Louis XV as the royal carriage passes on its way back from Varennes.


31:54: The film digresses at this point, to allow Richard to meet some suitably cerebral graffiti artists. In 2010 Lek and Sowat led a forty strong team to embellish the walls of a huge abandoned supermarket. They  readily agree that they are not vandals (though I am not sure how much they really buy into the Revolutionary parallels)
http://mausolee.net/
.
38:28: Another contemporary  analogy, a "Space Invader" on the column in the place du Châtelet. Richard provocatively asks why this is illegal when  a big intrusive ad for VW is allowed. (I think he knows the answer really).  There are actually over 1,000 Invader mosaics:
http://www.localnomad.com/en/blog/2012/11/02/space-invaders-in-paris/
https://www.flickr.com/photos/meteorry/sets/124207/

Back to the Revolution - symbols of royalty destroyed:
39: 26: The statue of Louis XV is toppled. The Assembly decrees that the metal should be taken to the forge to make "cannon to fire on the armies of kings".
40:33:  The statue of Henri IV.on Pont Neuf  dismantled: "as hollow as the power of kings". 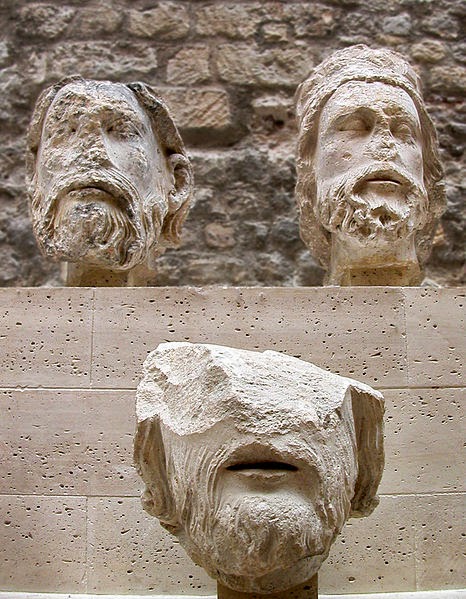 41:58:  Statues of Kings on the facade of Notre-Dame toppled onto the parvis. 21 heads were rediscovered during building work in 1977 in basement of a house built for Jean-Baptiste Lakanal on the rue Causée d'Antin.   They are now on display in the Musée Cluny.

47: 29 Dechristianisation - St-Sulpice
Festival of Reason at Notre-Dame (47: 29) and at St-Sulpice (48: 58)
The official dismantling of Christian and royal symbolism at St-Sulpice by a team under François Daujon.
There are some great scenes of the interior of St-Sulpice and its towers.  Here are some photos from intrepid Belgian "urban explorers" which are nearly as good:
http://www.forbidden-places.net/urban-exploration-saint-sulpice-secrets#14

François Daujon:
Daujon's career illustrates the complications of personal allegiances and individual decisions during the Revolutionary period. Like Palloy, he allied loyalty to the Revolution with financial acumen;  there are detailed invoices for his work in St-Roch, St-Eustace and St-Sulpice. A sculptor rather than a "stonemason", Daujon did not really share Dr.Clay's enthusiasm for creative destruction. He is mentioned as one of Alexandre Lenoir's three "assistants", engaged in the preservation of monuments.  As Dr Clay himself notes, Daujon made good his altered statues and ran foul of conflicting jurisdictions in his effort to rescue pieces of historical and artistic merit.
Interesting, this is the same Daujon who, as Commissioner at the Temple, was responsible for saving the royal family from the crowd carrying the head of the Princesse de Lamballe. Dr Clay quotes a letter from Daujon in defence of his Revolutionary record, when he was briefly arrested post-Thermidor:

"Since 1789 I have not ceased to serve liberty. I did my service in person every time I was not en fonction. I presided over the Section du Nord and of Bondy in stormy times, and these sections were always in good voice[….]On the night of 10 August, I was presiding over the Section du Bondy and called all the citizens to the defense of liberty. I was named first commissioner on that famous night. I was at the Temple as a municipal officer when they brought the head of Lamballe. I prevented them from killing the tyrant, I wanted him to die on the scaffold and I accompanied him there as a soldier. I was in the departements in September 92 to call the citizens to the communal defense. [... ] As a municipal officer I signed the petition of 31 May [ 1793] against the 32 [Girdondin representatives ejected from the Convention].[…]I occupy myself with nothing but the arts, my profession, during which  I was arrested by my revolutionary committee on 15 Thermidor. I am making a statue of liberty [... ].The fatherland has hardly any better friend, I have sacrificed everything for it, I ask to be allowed the liberty that I have so many times risked my life to defend".
(quoted Clay,Thesis, p.171-2):

Podcast Q & A on the documentary, following a screening before an invited audience at Birmingham University
https://audioboom.com/boos/2117999-dr-richard-clay-tearing-up-history-on-bbc-four-transferring-academic-research-to-the-screen