In search of the Tuileries Palace: the Château de la Punta 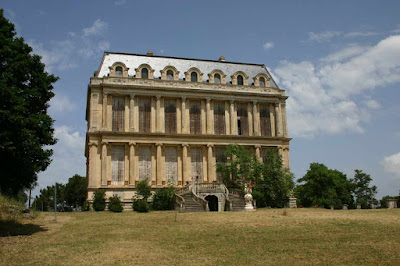 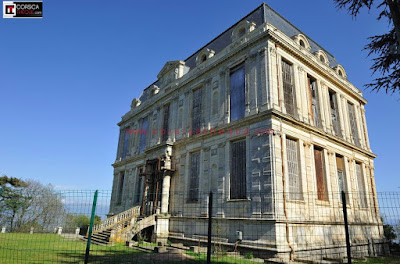 Rather bizarrely, the most substantial portion of the ruined Tuileries Palace to survive today is a reconstructed pavilion situated on the remote heights of Ajaccio in Corsica. The Château de La Punta was built for the duc Jérôme Pozzo di Borgo and his son who in 1883 bought a substantial consignment of decorated stones from the demolition contractor Achille Picart  The stones were crated up, taken by train to Marseille and thence by sea to Corsica.  No doubt, the duc, who was the nephew of Charles-André Pozzo di Borgo, a bitter enemy of the Bonapartes, was gratified to have this echo of Napoleonic splendour transported to his own ancestral lands.

The architect responsible for the project, Albert-Franklin Vincent, based his re-construction on the West facade of the Tuileries' pavillon Bullant. It is an austerely square structure, with ionic columns on the first level and Corinthian columns on the second.  On the south side the entrance features two marble columns by Le Vau after Delorme; by the staircase stands a sculpture of the Four Seasons by Jean Debray which came from the old Hôtel de Ville in Paris.  Old photographs suggests that the interior was once equally lavishly adorned, though the furnishings were sold off by successive owners in the 20th century.

The Château is now in a very sad state of repair with the interior completely closed for safety reasons.  Following a fire which destroyed the roof in 1978, it  was sold off to the  Conseil Général of the Corse-du-Sud department, which has already spent considerable sums on replacing the roof and inserting a metal frame to support it.  In 2003 it was estimated that a further 10 million euros would be needed if the Château was ever to be opened to the public.  Sadly this is well beyond the scope of the departmental budget.  The fact that the building is a listed national monument severely curtails the range of options; the EU favours "re-utilisation" of historic buildings but the location - seven kilometres up a virtually impassable road in an isolated part of Corsica - makes this an unlikely solution.

From time to time indignation is expressed at the Château's delapidated condition.  Only a week or so ago an article appeared in the newspaper "Corse Matin" reporting the shock of Alexandrine Pozzo di Borgo, a relative of the former owners, when she visited La Punta  after an absence of twenty years. There is a vocal group of "friends of La Punta" who have begun a petition for its repair.  However, it seems likely that nothing much will happen unless someone is able to come up with the monies required.


The ruin has a certain melancholy attraction.  Here are some atmospheric pictures by a local photographer:
Thierry Raynaud Corse-Photo.fr
http://corse-photo.fr/gallery2/main.php?g2_itemId=2202