Voltaire by Largillière - the case of the two portraits 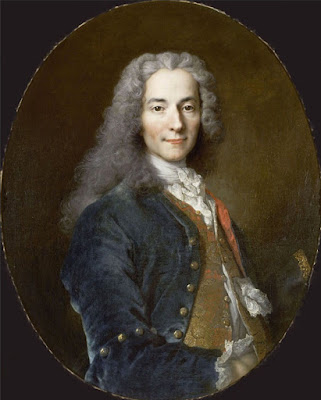 Here is the magnificent Largillière portrait of Voltaire in the Versailles collection, prominently rehung in the Salle du Pape in January following the Charlie Hebdo shootings. Shame that it should ever have been hidden away! 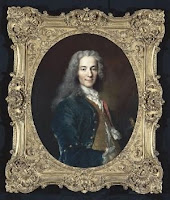 Even though the painting is so well known, there is a certain amount of  mystery surrounding it.  The problem is that there are actually two Largillière portraits, this one in Versailles and one in the Musée Carnavalet, both of which have good claim to be the "original".  The prima facie case for the Versailles portrait is a strong one.  It  is clearly the superior painting in finish and coloration, and has the endorsement of Largillière experts such as Dominique Brême, who wrote the catalogue for the major Largillière exhibition at the Musée Jacquemart-André in 2003. But the Carnavalet portrait too has a well-established provenance.

Voltaire, the actress and the painting


The only early reference to the portrait is a note in the Kehl edition of the works of Voltaire relating to the Epistle Les tu et les vous which was written in about 1729 and probably addressed to Voltaire's former lover Suzanne de Corsembleu de Livry, marquise de Gouvernet. Long ago in 1716, whilst in exile at the Hôtel de Sully, Voltaire had struck up a relationship with the beautiful aspiring actress.  Despite Voltaire's voice coaching she failed to excel on the stage, even when Voltaire secured for her the leading role of Jocasta in Oedipe.  She subsequently travelled with a troupe of actors to England,  acquired an aristocratic husband the marquis de Gouvernet, and, with Voltaire's aid, won a fortune on the lottery. In 1729 Voltaire was not amused when he found himself turned away from her door by a lackey.  A lifetime later in 1778, during Voltaire's final months in Paris, the former lovers, now both octogenarians, met once again. Voltaire discovered that she still possessed his portrait.
According to the note:

"At the time of his liaison with mademoiselle de Livri, M. de Voltaire had given her his portrait, painted by Largillière, and she had kept it always despite their parting, her change of estate and her religious devotion.  During their conversation in 1778, he let it be known that he wanted to offer this portrait to the marquise de Villette;  madame de Gouvernet consented, and Voltaire immediately carried it off personally to madame de Villette, who has possessed it ever since."

The picture was sold as part of the Villette collection in 1865.

Here is a notice:

[Largillière. Portrait of Voltaire, thirty-five years old.  Blue coat, hat under the arm, left hand in his waistcoat.  Voltaire had given this fine portrait to Mlle de Livry; later he expressed his desire to offer it to Mme de Villette.  Mlle de Livry, who had become Mme de Gouvernet, consented to this.  Voltaire took it and carried it himself to Mme de Villette.  Ever since that time it has remained in the family.]

This picture is almost certainly the one now in the Musée Carnavalet. It belonged to Jean-Baptiste Mariani, the former French ambassador in Rome (I am not sure whether he actually bought it at the Villette sale but, if not, it was always identified in the 19th century as the same painting.)  When he died in 1890, he bequeathed it to his brother-in-law Charles Floquet (one time Prime Minister of France), whose widow donated it to the Carnavalet in 1899. The picture is annotated in an 18th-century hand: "Fr. de Voltaire, peint par Largillierre en 1728, donné à la marquise de Villette en 1778" (It is interesting that both this note, and the sale details, place the painting in the late 1720s rather than 1718.) 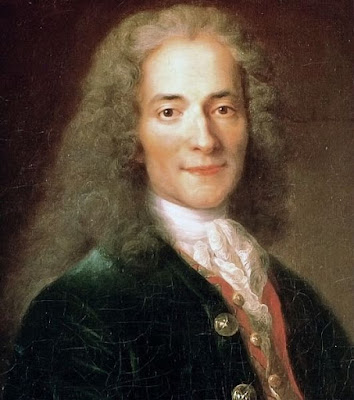 No other copy of the work was  known to 19th century commentators.  Critics often complained that, since this picture was in private hands, no good quality  portrait of Voltaire was accessible to the public.  There was only an inferior copy prepared for the Académie française.  This still  exists at Versailles; the details of Voltaire's dress  - notably the red waistcoat and arrangement of buttons - show clearly that it derives from the Carnavalet portrait.

What about the Versailles Largillière?

We know that it belonged to Massimo Uleri - presumably the film producer -  who donated it to the Versailles collections in 1962.  Squinting at "snippet view" of the 2003 Largillière exhibition catalogue yields the information that this portrait too is identified as the picture given to Suzanne de Livry.  The earliest entry in the detailed provenance refers to the collection Evrard de Rhoné, which was the subject of a sale in Paris, hôtel Drouot, on 6-8 May 1861.  (I even found a sale catalogue on Internet Archive but, disappointingly, there is no mention of the Voltaire.).  The portrait subsequently belonged to several other collectors and was sold to M. Uleri in December 1961.

The  notice for the Carnavalet Voltaire offers one possible explanation:

Samuel Taylor is presumably Samuel S.B. Taylor, who has written extensively on both Voltaire and Rousseau. So far I haven't traced the reference.  However, there is clearly no absolute consensus among the experts.

It might be worth pointing out that we do not really know if the portrait given to Mlle de Livry was the "original" or the only one in circulation in the 1720s; would Voltaire really have surrendered the only copy to his mistress (or even ex-mistress), I wonder?

http://a80-musees.apps.paris.fr/
I can't see a way of linking directly to this notice for the Carnavalet portrait on this website, so here is a copy: