A people and its King..... (Jean-Clément Martin)

A new film on the French Revolution is a big event! 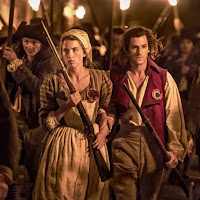 Un peuple, et son roi [One Nation, One King], directed by Pierre Schoeller, was premiered at the Venice Film Festival and went on general release in France on 26th September.  It is a film conceived on a lavish scale:  the cost of production was €16.9 million ($20.8 million) and there is a star-studded cast: Gaspard Ulliel (Basile), Louis Garrel (Robespierre) and Denis Lavant (Marat).  The film is reported to be presold, indeed already "sold out", in several countries - Spain, Portugal, Benelux, Switzerland, Greece, Hungary, plus Japan and China - but not as yet in the UK or US.
.

The action encompasses most of the major events of 1791-93. The storyline, which is really little more than a vehicle, concerns a young convicted criminal called Basile (Gaspard Ulliel), who is liberated and follows  the King on his return from Varennes.  He subsequently falls in love with Françoise (Adèle Haenel) and becomes an insurgent.

I haven't seen the film, but the trailer (above) left me disappointed. The shots of the March on Versailles and the inside of the Assembly do not seem much more real than those of the French Revolution blockbuster by Robert Enrico and  Richard Heffron, which was made thirty years ago. The American reviews confirm this first impression. The critic in Hollywood Review described the production scathingly as "a wannabe epic about the French Revolution that’s so bad it almost makes you wish France were still a kingdom".  In his view the plot was thin and events too crowded in; political opinions were represented by slogans and historical figures reduced to caricatures. The deputies in the Assembly were just "men in foppish wigs spouting big ideas in tiny speeches".  Ouch!

Unsurprisingly, the film has been more favourably received in France where its pretentions have been taken much more seriously.  It has been advertised with the encomium "Magisterial. A Great Political Film".

Pierre Schoeller takes himself very seriously indeed.  And to be sure he addresses two extremely serious topics: the role of "the people" in the French Revolution and the legitimacy of political violence. In his director’s statement, Schoeller says that he was inspired to make a film about the Revolutionaries because “these people built their sovereignty, established new relations of equality, ordained new rights (…). They have things to tell us.” He explains that he has organised his material around the concept of "le peuple décisif" and, as a secondary theme,  around the importance of women in Revolutionary events.

Several academic historians were consulted in the course production and others have given their considered response.  There is a feature based on the film in the magazine Historia for October with contributions by Olivier Coquard,  Hervé Leuwers, Thibaut Poiret, Jean-Clément Martin and Guillaume Mazeau.  Jean-Clément Martin has also published a long review essay:

Here is an English summary:

As one might expect, Professor Martin is sympathetic towards the enterprise of portraying  popular revolution.  He declines to criticise the cinematography, though he does admits that the drama is in danger of being stiffled by the film's didactic purpose (Au risque...que la dimension didactique étouffe le film.) and by the need to reference a whole host of Revolutionary events.

He begins by pointing out a few anachronisms. (In an epic of this scale, the struggle for historical accuracy is "no doubt lost in advance"): 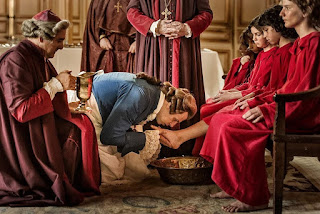 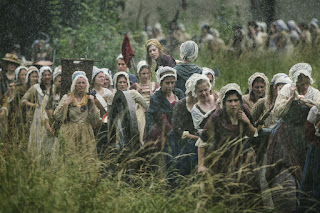 Here we move on to the main core of Professor Martin's critique.  He complains that some of the more difficult episodes of Revolutionary violence are omitted from the film - for example, the deaths of the gardes du corps on 6th October 1789.  More fundamentally, although the events of 10 August are depicted in graphic detail, the September Massacres are mentioned only once, and that ambiguously (one of the characters wishes the victims paix à leurs âmes.).  Another silence concerns masculine reactions to feminine violence - which was negative among supporters as well as enemies of the Revolution. 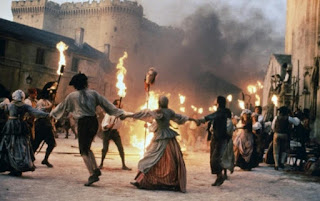 The Revolution of the People

Professor Martin contests the idea that there was ever a unified Revolutionary populace.  The film presents only a small sample of stereotypical "sans-culottes":  families of artisans and workers, with a few beggar children and a pittoresque vagabond thrown in for good measure.

In reality, the radical supporters of Revolution were socially divided. They included well-to-do employers like the rich brewer Santerre and Duplay, a master-carpenter. Such patrons continued to be nervous about the demands of their workers. It is shame that Pierre Schoeller omitted real radicals like the Enragé Varlet, who wanted to establish direct democracy and equality between the sexes.

Whole swathes of Parisian society are simply missing from the story:  the mass of middling people, domestic servants, priests and believers, provincials and immigrants. To illustrate the true complexity of allegiances, Professor Martin draws attention to his researches on  "les dames de la Halle" who led the October March, but who also demanded the preservation of Christmas and concerted together to oppose the radical femmes enragées. 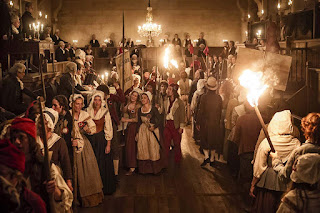 Un peuple, et son roi - the title presents a dichotomy which is misleadingly simplistic.  Louis himself - played disconcertingly by the dark, lean Laurent Lafitte - is made into a pompous caricature, always sporting his decorations, and always shown in strange isolation.  Similarly the film sets up a artificial contrast between  the "people" and its representatives, those who act and those who debate. The political Revolution is represented entirely by the deputies who, apart from Marat, are portrayed as bewigged and impotent.  They are invariably seen in the Assembly,  with nothing shown of their lives or relations with others.  This is evidently misleading.  Danton, for instance, was heavily involved in the politics of his quartier, in the Cordeliers Club, in orchestrating the Revolution 10 August.  (The printer Momoro, who appears briefly,  was also a prominent figure in the Cordeliers.)  Even the aloof Robespierre had close relations with the martyred sans-culotte leader Lazowki, and drew a "garde du corps" from the Sections. 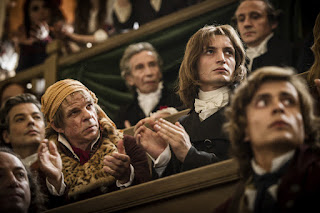 The proliferation of institutions - assemblies, delegations, committees - was one of the great characteristics of the period and its experiment in direct democracy.   It is historically false to show as spontaneous and disordered the departure of the insurgents by torchlight on 10th August;  the insurrection had been prepared several days in advance by the Comité de l'Evêché;  the deposition of the king had been debated for weeks by the Sections;  Danton, and even Pétion, were involved. Contrary to the impression given by the film, the action was the prerogative of armed men, with no women or children present.

The film ends with the death of Louis XVI.  The royal execution, as the accomplishment of popular Revolution, is linked metaphorically with the achievement by Basile, now a glassblower, of a perfect glass sphere.  Jean-Clément Martin again points to omissions and errors which subtly alter this final message.  There is no recognition of Louis's personal courage, no depiction of the intimidation which accompanied the vote for his death in the Convention (and the number of votes is wrong).  There is also no sense of the massive security which surrounded the execution;  Louis rode with two gendarmes, who personified the force of the state.  All these factors militate against the idea that the King's execution represented a unanimous popular will or a lasting resolution of the Revolutionary crisis.

Professor Martin's criticism is clearly of a piece with his insistence elsewhere on the importance of historical detail.  A film must necessarily be selective.  But, by ironing out the complexities, Pierre Schoeller has falsified the record.  The film claims erroneously that "popular identity is natural, consubstantial, identified with the poor". Thus is sidestepped  the whole fraught political debate about the nature of "the people", and the dilemma of the Rousseauist "general will".  Moreover, says Martin, the  justification offered for Revolutionary violence is a biased and misplaced one - it is "une légitimation dérangeante".