The Frenchman and the "pot of porter"

This anecdote is again from Fanny Burney. In October 1792 Fanny and her half-sister Sarah were the guests of Sarah's uncle by marriage, Arthur Young,  at Bradfield Hall in Norfolk.  Here they met the exiled duc de La Rochefoucauld-Liancourt, who was renting a house in Bury-St-Edmunds. The  two men had struck up an unlikely friendship through their mutual interest in agricultural improvement. In 1784 Young had played host to La Rochefoucauld's two sons, and in 1787 and 1788, during his tour of France, he had visited the château de Liancourt and its great estates to admire the duc's innovations, which included a model farm and a  manufactory for linen and cotton cloth.  Young had since washed his hands of the constituants révolutionnaires and declared to Fanny that Liancourt deserved his misfortunes; but he consented, nonetheless, to invite him to dinner.

François Alexandre Frédéric de La Rochefoucauld-Liancourt, had been one of the most conspicuous members of the liberal aristocracy.  In 1789, as representative of the nobility of Clermont-en-Beauvaisis at the Estates-General, he had been one of the forty-seven noble deputies who joined the Third Estate on 25th June in formal disobedience to the King.  As grand maître de la garde-robe, it had been he who had brought news to Louis of the fall of the Bastille: he is credited with the famous observation, "it  is not a revolt, Sire  - it is a revolution!".
La Rochefoucauld had been an active member of the Feuillants,  had spoken in the Assembly in favour of liberty of conscience, and was the first to propose the abolition of hanging.  At the same time he continued to develop manufacturing  workshops at Liancourt and in 1790 installed a mechanical cotton mill.  After the dissolution of the Constituent Assembly he was nominated  Governor-General and Commandant of Normandy and Picardy.  Disillusioned with the course of the Revolution, he entertained vain hopes of bringing the royal family to Rouen and thence effecting their escape to Le Havre and Britain.  When Louis refused his offer, he placed at 150,000 livres, a substantial part of his fortune, at the King's disposal.  Finally La Rochefoucauld  was himself forced to flee.  When his cousin La Rochefoucauld d'Enville was killed at Gisors on 14th September 1792, he inherited the title of duc de La Rochefoucauld.


Fanny takes up the story:

The duc was in Rouen with four regiments under his command when news reached him of the 10th August.  He at once summoned his officers and men, and standing in the mist of them "he took of his hat and called out aloud, 'Vive le Roi!'".  Only his officers echoed him.  Again he called out and this time the soldiers responded in like kind. "In what manner he effected his escape out of Rouen he has never mentioned." Once at the coast, he and his groom embarked on a small boat, manned by two sailors; they "planted themselves at the bottom of the boat and were covered with faggots", and thus remained, "till they thought themselves at a safe distance from France".  At one stage alarmed and disorientated in the fog, they imagined they had been betrayed and were headed back to France.

Eventually they safely reached England.   It was at this point that La Rochefoucauld had his unfortunate encounter with the "pot of porter":

At length they landed—at Hastings, I think.  The boatman had his money, and they walked on to the nearest public-house. The duke, to seem English, called for “pot portere.”  It was brought him, and he drank it off in two draughts, his drought being extreme; and he called for another instantly.  That also, without any suspicion or recollection of consequences, was as hastily swallowed; and what ensued he knows not.  He was intoxicated, and fell into a profound sleep.  His groom helped the people of the house to carry him upstairs and put him to bed.  How long he slept he knows not, but he woke in the middle of the night without the smallest consciousness of where he was, or what had happened.

See Gregg Smith,  "Porter", on RealBeer.com
http://www.realbeer.com/library/authors/smith-g/porter.php
Porter was apparently first brewed by the Bell Brewery in Shoreditch in the 1720s.


He looked round the room with amaze at first, and soon after with consternation.  It was so unfurnished, so miserable, so lighted with only one small bit of a candle, that it occurred to him he was in a 'maison de force' — thither conveyed in his sleep.  The stillness of everything confirmed this dreadful idea. He arose, slipped on his clothes, and listened at the door.  He heard no sound.  He was scarce, yet, I suppose, quite awake, for he took the candle, and determined to make an attempt to escape.

Down-stairs he crept, neither hearing nor making any noise and he found himself in a kitchen.  He looked round, and the brightness of a shelf of pewter plates struck his eye; under them were pots and kettles shining and polished. “Ah! “? cried he to himself, “je suis en Angleterre.”  The recollection came all at once at sight of a cleanliness which, in these articles, he says, is never met with in France.

Next day, the Duke accepted Young's invitation to dinner and arrived at Bradfield Hall on horseback.  Since he was early, Fanny and Sarah were summoned to entertain him.  They found him in the drawing room playing with his favourite dog, which his groom had just brought back from France.  Here is Fanny's description:

He is very tall, and, were his figure less, would be too fat, but all is in proportion. His face, which is very handsome, though not critically so, has rather a haughty expression when left to itself, but becomes soft and spirited in turn, according to whom he speaks, and has great play and variety. His deportment is quite noble, and in a style to announce conscious rank even to the most sedulous equaliser. His carriage is peculiarly upright, and his person uncommonly well made. His manners are such as only admit of comparison with what We have read, not what we have seen; for he has all the air of a man who would wish to lord over men, but to cast himself at the feet of women....

He rapidly beguiled the two sisters, Sarah by playing with his dog like "a true French Polisson" and Fanny with attentive conversation about her novel Cecilia. The party enjoyed a pleasant dinner, in which Arthur Young comically interspersed French conversation with English words spoken in a French accent.  However,  the meal once over, Fanny reported that La Rochefoucauld gave way to melancholy: "Recollections and sorrow had re-taken possession of his mind;  and his spirit, his vivacity, his power of rallying were all at an end. He was strolling about the room with an air the most gloomy, and a face that looked enveloped in clouds of sadness and moroseness".

In 1784 duc's two sons François and Alexandre, came to England with their Polish escort Maximilien de Lazowski. The party was persuaded to base itself at Bury where they met Arthur Young, and were taken by him on a five or six day tour of Suffolk and the Essex border.  François left a diary, which was translated and published by the Suffolk Records Society in 1988. He said that he liked Young, but disliked visiting Bradfield Hall, because Young kept an extremely poor table. As to Mrs Young, he found her so ill-tempered he suspected her of beating her husband. 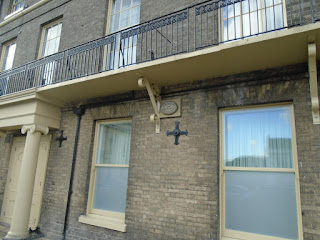 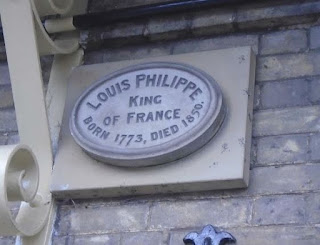 The history of the émigrés in Bury-St-Edmunds is a little confusing. The first party to arrive was Mme Genlis with the fourteen-year-old Madame Adélaïde d'Orléans and two companions, Mlle de Sercey and Pamela (later Lady FitzGerald).  She had travelled to London in October 1791 in the company of the two Deputies Pétion and Voidel, spent a few weeks in Bath, then continued unaccompanied to Bury.  She stayed initially in a house next to Angel Inn, which was probably the same one that the La Rochefoucauld party had occupied in 1784.

This house, 2 Angel Hill, still stands today and  bears a  plaque commemorating the sejourn of Louis Philippe; but he was not with them; he spent seven months from August 1791 to March 1792 with his regiment at the citadel in Valenciennes,and had disapprovingly seen the women off in Calais.

Mme de Genlis then rented a small house, 84 Whiting Street, in the middle of the town.  Louis-Philippe reported that neither he nor his father were able to ascertain the reasons for this "bizarre choice".  The disgusted duc de La Rochefoucault, reported to Fanny Burney, who had met Mme Genlis on a previous visit,  that she had lived reprehensibly,"with several others, who appeared in various ways, as  artists, gentlemen, domestics, and equals".  She was also said to have "almost lived" on the hospitality of Sir Thomas Gage at Coldham Hall.   Having promised to stay a month in England, under the pretext of taking the waters in Bath for Madame Adelaide's health, she in fact stayed thirteen months. The duc d'Orléans was finally driven to send Hugues Maret, the duc de Biron's former secretary, to England with power of attorney to force her  to return his daughter. On his arrival, the party departed precipitately for Paris, leaving their debts behind them. The  duc de La Rochefoucault, who co-incided briefly, then took over the lease on the same house in Whiting Street: Fanny Burney confirms,:"The Duke is now actually in her house.  There was no other vacant that suited him so well".

See A Frenchman's Year in Suffolk, p.xxxv, note 20:
There are some references to a house next to the Angel Inn, possibly the one which today has a plaque commemorating the later sejourn of Louis-Philippe.  On 14th February 1793, a five-bay, three-storeyed Georgian-fronted house in Whiting Street, now number 84, appeared in the rate book as "Duc de Lerincourt House - 12 rent, 1.4s rates".  This house was unoccupied the previous August.
In January 1814 a death notice appeared in the local press for one Alexandre Desoutre [elsewhere "de Soustrice"], aged 20, "natural son of M. Liancourt (now Duc de Rochfoucault) by his French servant, during his residence in Bury with Madame Genlis, and the ill-fated Pamela, afterwards Lady Edward Fitzgerald.  The bit about Mme Genlis is impossible for many reasons.

At least we have a clue how a French noble passed his time in exile!


La Rochefoucauld stayed a year in Bury, by which time Suffolk was on a war footing -  Arthur Young himself formed the Suffolk Yeomanry and a troop of Light Dragoons was based in Bury in readiness to meet a French invasion.  The duc departed for Philadelphia in October 1794.