Wigs and the 18th-century consumer

The following is taken mainly from an article by Michael Kwass, Professor of History at Johns Hopkins University.  The subject is the wig trade in 18th-century France, and the light it sheds on the emerging world of the consumer.

Wigs as objects of consumption

By the mid-century wigs had become an everyday item of male attire across a wide social spectrum. They "seemed to have tumbled down the social hierarchy, so far down that writers now observed them sitting atop the commonest of heads" ( Kwass, p.634-5)  Mercier  in the Tableau de Paris, for instance, listed  many types of ordinary men who had taken to wearing wigs:  schoolmasters, old choirmasters, public scribes, law court ushers,shop boys, legal and notarial clerks, domestic servants, cooks, and even kitchen boys.   However, the growth in demand for wigs did not just reflect an expansion in conspicuous consumption or the pursuit of marks of social rank.  It represented the
emergence, through printed word, of "a new set of consumer values based on convenience, natural authenticity and self-expression". (p.634)

Business was booming!  Records are unusually good as the wigmaker's trade was regulated by charges, or licences to operate,  issued by royal authority and controlled by the Corporation of Barbiers Perruquiers.  The number of masters in Paris multiplied from 200 in 1673 to 835 in 1765 and 945 in 1771. The peak membership was  1014.  According to one Almanac of 1776, "there is no neighbourhood where one does not find many [wigmakers], and there is nothing easier than informing oneself about the most renowned" (quoted Kwass, p.635-6).  A vast number of wigmakers also operating illegally outside the guild system, and were subject to periodic policing by the Corporation.  They worked both openly, in shops, and in clandestine premises, typically on a second floor (see Gayne, 2004).  Evidence from provincial centres show a similar pattern.  Surprisingly small communities boasted local wigmakers and the wig trade penetrated into small country towns and villages via peddlars, markets and fairs.


By the end of the seventeenth century  the wearing of wigs had already spread to non-aristocratic professionals:  magistrates, clergymen, financiers, well-placed domestic servants.  It now extended to still more middling groups.  In the middle of the century  the Rouen wigmaker  Le Tellier, whose account book been studied by Professor Kwass,  counted relatively humble curés and procureurs among his clientele.  His cheapest wigs were twelve livres, half the cost of a decent coat or a silver snuffbox.  Moreover, he turned out over a hundred wigs a year.


Further evidence is provided by the "surprisingly robust presence" of wigs in after-death inventories.  For instance, inventories for tenant farmers in the Île-de-France revealed an increase in wig-owners from virtually none at the beginning of the century to 46 per cent in the 1750s; "The rustic fermiers of the Île-de-France had transformed themselves into bewigged gentlemen farmers" (Kwass, p.638)  Studies from Normandy and Savoy yield similar results. Wigs now adorned the heads of farmers, professionals, merchants, shopkeepers, clerks and the wealthier artisans throughout France.

The chronology of this expansion is difficult to assess with certainty.   The initial period of growth seems to have been from the Regency to mid-century, a period of general consumer vitality.  By the third quarter of the century, the wig had become a commonplace commodity. It was part and parcel of a whole intermediate consumer zone of "accessories" - toiletries, snuffboxes, cans, fans, watches, umbrellas - which were by no means confined to women.

Following Norbert Elias, social historians of 18th-century France have tended to see wigs and other items of personal adornment as part of a growth in "conspicuous consumption"; the  primary function was to bolster status and privilege by encouraging  social emulation.  Wigs were certainly seen by contemporaries as a statement of social position.  Thus a set of fashion plates by Michel Moreau  published in 1776 depict men of descending social and political status wearing different kinds of wigs or no wigs at all.  The seigneur, bishop, nobleman, magistrate, financier, abbé, bourgeous and doctor all wear styles of wig appropriate to their status.  The artisan and gardener have natural hair under their hats.  The series ends with a lowly - and bald - beggar.
Michel Moreau, Les costumes françois representans les differents etats du royaume (1776)
https://books.google.co.uk/books?id=toFcAAAAcAAJ&printsec=frontcover#v=onepage&q&f=false


However, according to Professor Kwass,  possessions  can also convey other, more complex and personal messages.  Writers and commentators - and the wigmakers themselves in the way they presented their goods - often discussed wigs completely differently, in terms of their convenience, truth to nature and contribution to physiognomy.

Convenience - "la commodité".  This concept was much evoked by defenders of "luxury", who applied it to a host of consumer goods, particularly furniture and clothing.  They asserted that wearing a wig was more convenient than cleaning and dressing one's own hair.  According to the Encyclopedie méthodique wigs possessed several advantages over natural hair, “one of the greatest of which is to relieve men of daily cares.” According to the satirical Éloge des perruques (1799), men soon discovered that their hairstyles were ruined by the slightest breeze and "longed for the immobility of wigs, as one wishes for calm after a storm." (p.10-11).  Convenience was particularly associated with the newer, lighter styles.  Molé's history of hairstyling  published in 1773, notes that  in-folio wigs had been disgraced at the death of Louis XIV to be replaced by "new editions" which were much more convenient and portable.  Knotted wigs and bagwigs, at first considered indecent for formal occasions, soon became accepted as part of fashionable dress (Molé, Histoire des modes françaises (1773), p. 119-20). The wigmakers themselves promoted a health and utilitarian aesthetic, advertising soft, flexible wigs, that allowed free movement of the head and were even comfortable enough to sleep in.

Nature:  By the 1770s  fidelity to "nature" had became part of the language of consumer appeal. From the mid-century  advertisements stressed how well wigs imitated natural hair.  For example, the wigmaker Chaumont, who operated from the St Honoré quarter, advertised a series of innovations which  made the seam between the forehead and the wig as invisible as possible.

Individual style:   Enterprising wigmakers claimed to tailor their wigs to the individual faces of their clients. In 1757 the lawyer and writer Jean-Henri Marchand parodied this idea with an Encyclopédie perruquière with illustrations of no less than forty-five styles of wig, supposedly to help the reader chose "the form which most flatters the air of his face".  Many well-known 18th-century figures used wigs as a means of self-expression:  Rousseau, took to wearing a simple round wig to express his independence and  Greuze sported idiosyncratic side curls.  Advertisements emphasised not only the rank but the aesthetic taste of the consumer.

This book was one of a whole series of  Descriptions des arts et métiers,  sponsored by the Académie des Sciences.  The volume was edited by the writer F-A.-P. Garsault, but the section relating directly to wigs is the work of  Antoine Quarré, "a skilled and ingenious perruquier who has carried out researches to perfect [the construction of wigs], and whose aim is to imitate the beauty of Nature."

The manufacture of wigs is a modern Art, which grows more perfect from day to day. It seems likely to endure due to the advantages of wigs over natural hair, the greatest of which is to rid the wearer of daily haircare.... Wigs are for both sexes and all conditions (Preface, p.vi)

The great art of wigmaking is to create hair for those whose own hair is inadequate. To make a wig, is to construct a sort of epidermis, to which hair is attached and arranged in such a way as to simulate the owner's own  hair.  The aim is to imitate la belle Nature. At the time of writing, some wigs follow the laws of Nature closely whilst others deviate from them -  but much less so than in the infancy of the art. Then wigs were immense and created the appearance of a bear or a lion rather than a human head. (p.5).
https://gallica.bnf.fr/ark:/12148/bpt6k1067624g 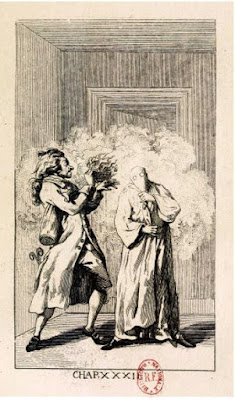 Imagine all the filth that lack of hygiene can amass.  It reigns in this shop where people come because they want to be clean.  The windows, clogged with powder and pomade, block out the light. Soapy water has eroded and loosened the pavement outside.  The floor and walls are impregnated with  thick powder. Spiders hang dead from their long white webs, asphyxiated by the constant volcano of the powderer. Don't ever enter this infected hole, but come and look with  me through the broken window pane.

Here is a man under a cowl of waxed cloth, a sort of gown which covers his entire body. They have just put a  hundred paper curlers onto a head which has no need to be disfigured by all these spikey horns.  A heated iron is used to flatten them out, and the odour of burning hair makes itself felt.  On one side, look at that face bearded with soap suds;  further on, there is a comb with long teeth which cannot enter into a thick head of curls.  They will soon cover it up with powder, and so find a solution.
https://gallica.bnf.fr/essentiels/mercier/tableau-paris/boutique-perruquiers