Wigs of the Professions

The wearing of wigs by the clergy was almost universal by the beginning of the 18th century.  Several wigmakers in Paris already specialised in ecclesiastical wigs, notably M de la Roze in the rue Saint-André, who, according to a 1692 almanac, was renowned for his "perruques abbatiales" (Livre commode des adresses de Paris, p.40)

The perruques d'abbé of the standard catalogue were short, simple affairs which differed from the bonnet laicque of the modest bourgeois  only by the addition of a slightly absurd tonsure. (The author of the Art du perruquier confides that this made them much more challenging to construct.)

Any moral reservations about clerical wigs would have disappeared from public view long ago had it not been for Jean-Baptiste Thiers's Histoire de perruques, published in 1692.  The redoubtable Thiers's irresistable mix of erudition and humour ensured that his work was reprinted and  referred to, even over a century later.

The abbé Thiers, learned and zealous opponent of superstition and abuses in the Roman church, composed a book of almost five hundred  pages against the wigs of ecclesiastics.  He talked first about lay wigs, whose usage began in France in about 1629....numbers grew to such a degree that in 1659 an edict was passed creating two hundred barbers, bathhouse keepers and wigmakers.  It was only in 1660 that churchmen first wore wigs. The abbés, or those who called themselves such - the abbés of the Court, dandies and men of fashion, started to wear wigs;  these were short and were called perruques d'abbé.  The first to wear one was famous for his base intrigues, La Rivière, later bishop of Langres.

The abbé Thiers proves convincingly that wigs were condemned by the Church;  he cites  challenges, rulings, statutes of the synods, directed against clerical wigs, as well as various attacks - including violent ones -, trials, scandals and coups that have taken place.


Theoretically canon law forbade priests to cover their heads whilst officiating. It seems that ecclesiastics habitually pleaded headaches or vulnerability to the cold - a feeble pretext, commented Molé, which had led to out-and-out conflict in certain dioceses (Molé, p.265)

According to the Oratorian Pierre Lebrun:
Dispensation to wear a wig to the Altar ...should only be asked for in cases of serious inconvenience and then with clear limitations laid down as to length, curls, colour and secular styling;  otherwise there is a danger that the rules of canon law on modesty of hairstyle  will be violated entirely. Most people agree that it is less harmful to wear a cap during Mass than a wig, which is often seen as a mark of worldliness.  For this reason several cathedral chapters have forbidden all priests and deacons to officiate at the altar in the choir whilst wearing a wig. See Mr Thiers for relevant statutes, disputes and judgments.
Lebrun, Explication ....des prieres et des cérémonies de la Messe (1718), p.103 nt.

The interdiction remained theoretically in place. In 1769 Voltaire enjoyed himself hugely by trying to persuade Cardinal Bernis to seek papal dispensation for Father Adam to wear a wig, so that he could keep warm in church when saying Mass.
Perhaps, in a world of glacial churches and cheerless presbyteries, the need was not so far fetched. It is recorded that in 1794, Father Joseph Raoulx, martyr of the faith, suffered from such violent headaches that he was permitted to wear a wig in the tumbril on his way to the guillotine.
https://books.google.co.uk/books?id=H19uU5KF-1kC&pg=PA405 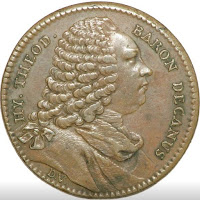 A series of medals ("jetons") commemorate the doyens of the Faculty of Medicine.  By end of the 17th century they are shown in enormous wigs.  With  E.-F. Geoffroy (1726-30) and his successors, the size is more modest but extravagant curls still sweep the shoulders -  as was the case with the wigs in the medical engravings of Hogarth.  At the mid-century Hyacinthe-Théodore Baron (1750-54) [left] wears an elaborate perruque à marteaux.  In later years, the wigs of the doyens were still elaborate, but generally shorter and more swept back in line with the fashions of the age. 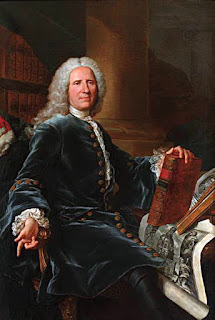 The Dictionaire des sciences médicales notes that certain elderly medical men persisted in wearing  massive old-fashioned wigs, of horsehair or black in colour, well into the new century.  Guérin, chief surgeon of the hôpital de la Charité and of the Gardes-Françaises, retained his until his death in 1742. Certain physicians affected such wigs as a protest against their diminished status under the Regency.

The Surgeons,  in contrast, eagerly adopted the fashions of the Regency era.  Maréchal, first surgeon of the young king, was the first among his colleagues to sport the splendid new wigs. His example was  was followed by his assistant François Gigot de Lapeyronie, painted by Rigaud in 1743 [right]. Portraits of later surgeons - .J.-L.Petit, Ladran fils, Levret, Lecat, Lafaye, Houstet - show the same adherence to modern styles.  The finest wigs of all among the surgeons belonged to La Martinière, Hévin and Louis.

For both physicians and surgeons, a fine wig soon became an essential accessory for the medical man in fashionable society, "the first item of a practitioner's equipment"." Choice was dictated by the wearer's purse.  The preferred wigs of doctors and surgeons  could be extremely expensive since they required "live" hair, prematurely grey for preference.  It was joked that  Bucquet and Vicq-d'Azyr (the profession's trend setters in the 1770s and '80s) had ruined the doctors and surgeons of Paris.

The common wig of the medical man was the perruque à trois marteaux.

Pupils and masters, candidates and senior doctors alike, all sported wigs:  "It was an amusing spectacle to see young men of eighteen or twenty lost in huge, magisterial wigs which contrasted singularly with their baby faces."

A few prominent doctors -  Antoine Petit,  Hallé, Corvisart - were considered eccentric because they insisted on wearing their own hair (presumably on their rounds, since they are bewigged in their portraits).  Corvisart was said to have been refused the post of doctor to the hôpital Necker, because Mme Necker refused point blank to appoint a man who was so badly coiffured.  During the Revolution, the profession generally abandoned their wigs and their black costumes:   Dr. Guillotin, for example, was well-known for his unadorned white hair.  The Dictionnaire of 1820 reports that there survived but one aged officier de santé in the Marais, whose black coat and tiered wig might serve to recall the sartorial traditions of the past.

The gens de Robe were the only professionals to persist in wearing long wigs.  The majority of them adopted perruques quarrées, but they still took glory in hair that descended right down to their belts.  For greater convenience they took the hair from each side and secured it at the back between the shoulders;  hence hairstyles "en pyramide renversée", or "les perruques pointues". (Molé, p.298-9).

These perruques naturelles or perruques naissantes were adopted as the preferred wig of "young men of the law" [Left: Dupaty].

As was the case with medical men, lesser legal functionaries - solicitors, notaries and clerks,  -  were obliged to wear black, so that their clothes were constantly soiled by powder and pomade.  The problem was made more acute because, unlike the "cheveux naissants" of magistrates and avocats, their wigs, whether round or knotted, reached only to their collar.

Wigs were confined to army officers: from the mid-century soldiers let their hair grow and greased it to hold it in the regulation hairstyle. They would use chalk as hair powder.  Since the officer corps was part of aristocracy, it was never subject to strict regulation.

The German Nicolai, whose history of wigs translated into French in 1801, noted the tenacity of full wigs in senior military circles. Generals and their adjutants wore heavy wigs in the field: Prince Eugene, Marlborough, George II at Dettingen (1743), Charles of Lorraine at Czaslau (1742) and the Austrian Field-Marshal von Daun during the Seven Years War - all fought in perruques à noeud or perruques à l'Espagnole.  Officers of the French état-major, from the time of the Regency, until the mid-century  wore full perruques carrés, or à l'Espagnole, with long curls down their backs. These can be seen in portraits of the Marshals of France, Belle-Isle, de  Maillebois, de Noailles.  (Nicolai, p.140-141)

The principal wig of the 17th-century officer corps, the perruque à la Brigadière, also continued to be worn into the new century: only fifty years ago, notes Nicolai, all senior French officers and many in Germany still wore this thick wig from the back of which hung two boudins, or tirebouchons.(Nicolai, p.143-144)  With its heavy rolled curls,  was said to make officers who used white powder look like “sheep on two legs”.  The Encyclopédie confirms: by the mid-century only “old military men” wore it.  The Brigadière was particularly associated with the grenadiers, who cut a fine figure on horseback in their wigs and bonnets.  See “Perruque à la brigadière”  in Dictionnaire de l'armée de la terre (1861) 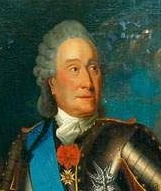 The perruque à deux queues or à cadenettes, was another old-fashioned wig of military origin, in which the hair was confined into two long pendant plaits.  This style fell out of favour by the 1720s, though, according to Nicolai, it was retained by aging courtiers until the time of Louis XVI. The Encyclopédie quipped that it was much favoured by Germans:  no-one, young or old, dared to present himself before the Emperor Charles VI without his "deux queues". The maréchal de Richelieu, who was the ambassador to Vienna, wore a wig with two long queues to his belt, right to the end of his life.  At the coronation of Louis XVI in 1774 the marshals of France were privileged to appear in traditional wigs which boasted three "queues" [Maréchal de Brissac, left]

In contrast French cavalry officers wore short wigs with a bourse until the War of Austrian Succession . Marchand’s  satirical Encyclopédie perruquière of 1757 has two wigs (no. 16 à la Dragone and no.19 à la Mousquetaire) whose names suggested to Nicolai that the troops of the royal household also sported the bourse (Nicolai, p.142). From the mid-century,  however, many young officers abandoned wigs altogether and wore their own hair with a  tricorne hat. "Soldiers soon became tired of knotted styles, indeed they ceased to favour wigs at all. Perruques à la brigadière were soon put aside.  Officers, like the simple soldiers, started to wear their own hair" (Molé, p.297) An ordinance of 25 August 1767 confined the wearing of pigtails to cavalry officers.  The officers of the infantry wore the cadogan, often confined in a crapaud. There followed a whole series of ruling in 1775, 1777 and 1788 concerning military hairstyles;  finally in 1792 the ribboned pigtail imposed throughout the army.  During the Revolution, officers often favoured short hair whilst outside France, "the stiff pigtail has become the invariable hairstyle for all the armies of Europe" (Nicolai, p.145)