Some Revolutionaries and their wigs


Wigs in the Early Revolution

The Revolution from the first involved issues of dress. The controversy which surrounded the opening of the Estates-General on 5th May 1789 highlighted the antiquated costumes of the three Estates.  As one anonymous deputy remarked, the dress code underlined the puerility of Court etiquette and degraded occasion into a "mascarade indécente". (Quoted Ribeira, p.46).  The sombre black uniform of the Third Estate served to underscore its inferior status. Some deputies refused to conform and wore ordinary clothes, even coloured coats.   On 15th October 1789 the Constituent Assembly formally voted to abandon all uniform; a few days later the obligation to wear clerical dress was also lifted.  David chose to depict participants in the Tennis Court Oath in English style suits and greatcoats.  Among the deputies, as on the streets, there was sartorial confusion.  The English visitor Mary Berry, wrote of the Assembly in Paris in 1790 that she had never seen "such a set of shabby, ill-dressed, strange-looking people".
Miss Berry's Journal (1865) p.217-8.
https://archive.org/details/extractsofjourna01berruoft/page/216/mode/2up
Wigs at first remained neutral in meaning.  The powdered wig, like the sword, was a symbol of nobility, but it also formed part of the everyday attire of the lawyers and well-to-do bourgeois of the Third Estate.  Amy Freund (2008)  has studied the series of portraits of deputies engraved by Nicolas-Francois Levachez  from 1789 onwards; many posed in their ordinary street clothes; the famous farmer-deputy Michel Gérard affected rural simplicity with his simple brown coat and bare head.  However, the majority,  still wore wigs or else their own curled and powdered hair.

Amy Freund, "The legislative body:  print portraits of the National Assembly, 1789-1791",  Eighteenth-Century Studies, 2008, Vol. 41(3) p.337-358. https://www.jstor.org/stable/30053554?seq=1
In this 1839 painting Couder imagines the deputies of the Third immaculately turned out, mostly in the long shimmering perruques naturelles of the legal profession.  He is almost certainly inaccurate.


Prominent wigwearers among the early Revolutionaries: 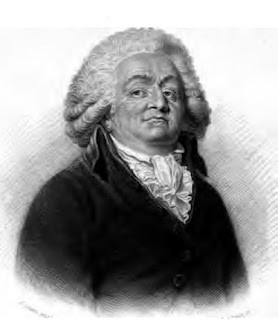 Mirabeau, scion of the aristocracy, was one of comparatively few deputies to pose for Levachez  in the uniform of the Third Estate (albeit in a nonchalant state of disorder).   In the Assembly he emphasised the need for uniformity of dress; though his vision of sartorial equality was by no means austere:  "The Third Estate were affronted at not being able to wear plumes or lace if they so desired".


Mirabeau himself was hardly ever to be seen without his immense frizzy perruque à la grecque.  The wig  served to frame his splendidly ugly face and ensuring he was always a conspicuous presence.  This was probably intentional - as  may be surmised from Mirabeau's comments in his Memoirs on the wigs of the time of Louis XIV:

My grandfather had a beautiful head of hair;  nevertheless, at the age of five and twenty he wore a wig, which appears the most extraordinary ornament of those days.  His motive was to render his features imposing by making himself look older.... A man left off his hair to wear a wig when he wished to impose upon himself, and upon others, sense of superior dignity .
Memoirs of Mirabeau (p.83 note)
https://books.google.co.uk/books?id=T4ATwCXq5eoC&pg=PA83&lpg=PA83#v=onepage&q&f=false 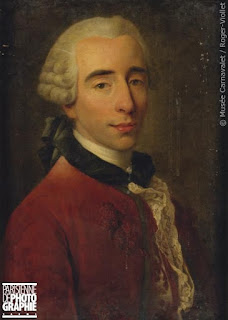 Bailly, an man in his 50s at the start of the Revolution, teamed plain but elegant dress with a magnificent trademark perruque naturelle.  The long following hair at the rear, with its "tress" of curls,  can be seen in various portraits  and engravings and, most strikingly of all, in his busts by Houdon and Deseine.

Bailly obviously liked his wigs.  Among contemporaries, he was also known as the last man in France to have sported the classic perruque à la régence with its bourse and two ribbons fastened at the front of the neck.
(Mullin, Magasin Encyclopédique, (1807) p.293)
https://books.google.co.uk/books?id=NsFRAAAAcAAJ&pg=PA293#v=onepage&q&f=false

A portrait in the Carnavalet [left] show a comparatively youthful Bailly in just such a wig.

Lafayette was another unrepentant wigwearer.  He cut a dashing figure in his National Guard uniform and perruque -  and he knew it.  He is often credited with popularising the perruque "à boucles en rouleau" which he almost invariably wore, sometimes with a bourse and sometimes with a long thin beribboned queue.  The main body of the wig, puffed up in the all-over frizz  fashionable in the 1780s, added volume to his long thin face . 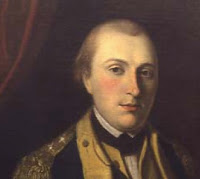 One can see why Lafayette stuck firmly to his wig. As the portrait of 1779 by Charles Willson Peale at Mount Vernon shows, even as a very young man he had sparse hair and a high forehead.

It is quite startling to first encounter the Lafayette of the 1820s, wearing his own hair in a short dark bob.  He has now contrived to grow his hair down over his forehead (or maybe sports a discreet hairpiece?)


Wigs in the later Revolution

By the middle of 1791, supporters of the Revolution already often wore their hair cut short and unpowdered, a style which later became fashionable for men and women as the coiffure à la Titus.  Among the deputies, it was Brissot, in imitation of the English Roundheads, who first made a point of cutting his hair short and appearing without powder. It is reported that those who followed his example were at first mocked, but the "tête patriotique" soon became accepted. It was introduced into the clubs and Committees, then taken up by members of the Convention.
Jean-Michel-Constant Leber, Notice sur l'habillement et les modes des français Collection des meilleurs dissertations  vol. 10,, (1838), p.411/
https://books.google.co.uk/books?id=F4NjlKVGfQ8C&pg=PA411#v=onepage&q&f=false
Wigs began to be denounced on ideological grounds:
On 10 August 1792 the Assembly forbade the wearing of wigs in the name of equality of appearances.  However, it is not certain whether this was intended general ruling or applicable only to that sitting.
(Ref from: Paul Gerbod, Histoire de la Coiffure et des Coiffeurs (Paris: Larousse, 1995), p.129. Is it  possible to check this?).

The Girondist deputy for the Meurth, the surgeon Jean-Baptiste Salles (1759-94), is recorded as having
spoken against wigs to universal applause:
All exterior signs which distinguishes one man from another must disappear.  It is after this incontestable principle that I denounce the use of wigs....Did Scaevola, Brutus, Scipio, Cato, wear wigs? The invention of the wig being very-aristocratic and tending  to destroy the principle of equality in a free country, I demand that it be suppressed.
Quoted by the abbé Gaume in La Révolution: recherches historiques sur l'origine et la propagation du mal en Europe, vol. 3(1856), p.260.  (Where is the original of this speech?)
https://books.google.co.uk/books?id=MWdbAAAAQAAJ&pg=PA260#v=onepage&q&f=false

It was no doubt in part because the symbolism of Classical Republican dress was particularly associated with the Girondin deputies that radicals like Danton and Robespierre continued to wear their Ancien régime costumes and wigs.
The Perruque "jacobine":
The characteristic haircut adopted by supporters of the Jacobins was not short, but involved long straight hair with a central parting.  The more follically-challenged, like Billaud-Varenne,  wore a  perruque or toupe "à la jacobine":


The year 1792 saw a new sort of hairstyle.  At that time the majority of men in France  adopted a hairstyle which resembled that of Christ, who in his images wears long hair, parted in the middle and falling sparsely onto his shoulders.  This fashion was introduced by revolutionary personalities such as the journalist Carra, whose name it took.  Until the end of 1793, the Jacobins wore this hairstyle;  those who did not have enough of their own hair covered their head with a wig of long straight black hair; as did Billaud-Varennes, who could be encountered every day during the September Massacres clearly recognisable "in his little puce-coloured jacket and his black wig".
Augustin Cabanès, La névrose révolutionnaire (1906), p.387
https://archive.org/details/lanvroservoluti00conggoog/page/n387/
Helen Maria Williams observed that Robespierre "far from being involved in a black wig" still wore his hair neatly arranged and powdered. 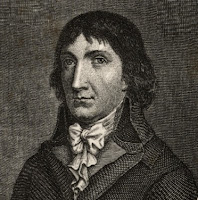 Billaud's famous wig is sometimes referred to as yellow or ginger; he was even characterised as "le tigre à perruque jaune"; but this is an error; contemporaries agree that the wig was black; his complexion rather than his hair was "yellowish".


On 1st Frimaire Year II (21st November 1793) the Commune formally forbade the wearing of perruques dites jacobines, on the grounds that disloyal citizens wore a Jacobin wig in Paris but their own hair in the country.
Moniteur, November 1793:
https://books.google.co.uk/books?id=vz1PAAAAcAAJ&pg=PA489#v=onepage&q&f=false
Compare the denuncation of Hérault de Séchelles's mission in the Haut-Rhin: in Paris he wore a perruque jacobine, but in the departments he disported himself "en ailes de pigeon".
https://books.google.co.uk/books?id=f5XSiNZy7dwC&pg=PA27#v=onepage&q&f=false

According to Larousse, the suppression of the Jacobin wig prompted the hairdresser Duplan to supply a short black wig to the actor Talma who played Titus in Voltaire's Brutus, hence giving rise to the  coiffure à la Titus.  This scenario seems a little dubious, though Duplan was certainly the chief exponent of the new hairstyle.