Here is a little more on the recent efforts by the Naundorff family and its supporters to support their claims from scientific evidence. 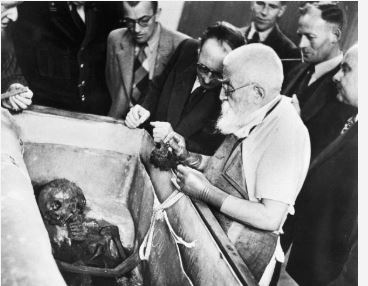 C-L recalls the cold damp day and the forensic specialist Dr Hulst, a diminutive figure, incongruous in a white rubber apron.  It was established that the remains were those of a man in his sixties,  with possible stab marks on his back (from assassination attempts).   This excluded a  current theory that the body was not Naundorff  but a soldier called Berg, a much younger man who shared the same boarding house. The individual was also too short to have been to a soldier.
The "Expertise Castelot"
In 1943 André Castelot asked a Dr Locard, director of the police laboratory in Lyon, to compare a lock of the boy king Louis-Charles's hair in the possession of the abbé Ruiz, with a sample from Naundorff, given to him by the baron de Genièbre.  The then new science of trichoscopy confirmed that the two specimens had the same characteristic off-centre channel. However, hair from the 1950 exhumation failed to reproduce the anomaly. As a result both Castelot himself and Alain Decaux retracted their support for the Naundorffists.  Locard later confided to Castelot that the initial specimens were so alike that he thought they must both have have come from Louis-Charles.


The first DNA testing in 1992
In 1992 the Dutch historian Hans Petrie invited Professor Cassiman to conduct DNA tests on hair recovered from Naundorff during the exhumation. Despite repeated attempts, it proved impossible to extract viable DNA from the hair,  so Cassiman was forced to rely on bone samples held by the Dutch police. The mitochondrial DNA sequence established from the bone showed two nucleotide differences from those of Marie-Antoinette and her two sisters (established from various hair samples) and four differences from living relatives (Anna of Romania and her brother André de Bourbon Parme).  As Cassiman repeated to Franck Ferrand in 2014,  this made it "exceedingly unlikely" that Naundorff was the son of Marie-Antoinette.
Here is Cassiman's report in the European Journal of Human Genetics for 1998.
https://rdcu.be/b4dLD
Predictably, the Naundorffists remained unconvinced. C-L felt that Petrie had betrayed his confidence and "corrupted" Cassiman.

There is one particularly interesting aspect of Professor Cassiman's  conclusions. In his book C-L criticises Cassiman for failing to use DNA from Naundorff's living relatives.  However, it seems he has misremembered:

A letter from Cassiman dated 5th May 1997 addressed to the two Naundorff cousins is reproduced on Facebook and several other websites.  In it Cassiman clearly states that he has created profiles for the Y-chromosome from blood samples given by various Naundorff descendants, the cousins included.  With a great deal of difficulty, he has also established a profile for the Y-chromosome from the bone sample. The significant point is that THE TWO DID NOT MATCH.  He concludes that it is "very probably the humerus, or at least the DNA extracted from it, does not come from a paternal ancestor of the Comtes de Bourbon living today".  Cassiman himself cautiously declined to pursue his researches further and suggested that they reopen the grave to secure further samples.

His readers, like the historian Bruno Roy-Henry, whose letter is also reproduced, immediately jumped to the conclusion the bone sample was at fault;  as C-L puts it in his book, the results were based on  "a very dubious bone with a different DNA formula".  However, the logical possibility remained that the corpse itself had been misidentified. 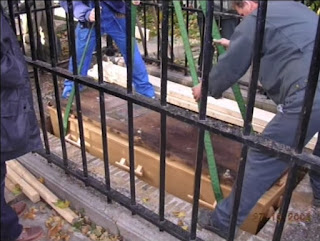 On 27th October 2004 a new exhumation of Naundorff's remains took place in Delft. Further DNA tests were carried out in Leiden by Professor Peter de Knijff , seconded by Professor Walter Parison at the Institute of Legal Medicine in the University of Innsbruck.

The initiative was a joint one between the two rival branches of the Naundorff family, but the French Naundorffs subsequently pulled out. The Canadian branch has never allowed the results to be published.  In August 2015 Professor de Knijff informed Philippe Delorme that he could not divulge his findings without written permission from the family lawyer. For a long time, Charles-Louis himself claimed that the tests had not yielded a clear DNA profile; on 22 September 2013 the baron d'Auzat,  his representative, wrote:  "I remind people simply that DNA analysis is only one means to resolve the enigma of Louis XVII.  Genetics is a modern science, constantly developing, and posing new problems everyday for  researchers".

Inevitably there was speculation that the results had proved unfavourable.  Sources close to the French branch reported that the Canadians "had proof that they did not descend from Naundorff".

In his 2017 book Louis-Charles de Bourbon finally gives an answer. It would seem that the rumours are justified. The results are "the same as the previous conclusions found by Drs Cassiman and Pascal", which "proved without doubt that the body in the grave in Delft was not a Bourbon body and thus the negative results":

We have never published these test results until now. But the final result is that there were three grave sites for Louis XVII. First, in Delft Holland, he was not in the National Monument of Holland. The heart in the Cathedral of St. Denis was not his. The grave in the cemetery of St. Marguerite was not his. Now we knew that the body in Delft was not a Bourbon, and no relation to me.

This is a little unclear, but it appears that the researchers have uncovered a new mystery; not only is the person buried in Delft not Louis XVII, apparently he is not Naundorff either!

The Findings of Gérard Lucotte

DNA profile of Hugues de Bourbons
Since the French branch of the Naundorffs did not have access to the results of the exhumation, in June 2011 Hugues de Bourbon agreed himself to undergo  DNA testing.  Samples were taken at La Rochelle at the home of Bruno Roy-Henry and submitted to the controversial geneticist Gérard Lucotte. In February 2014 Lucotte published his findings in the International Journal of Sciences  He compared the Y-STR  profile of Hugues de Bourbon with those established in 2014 by Cassiman and Larmuseau  for three living male members of the Bourbon family. The results were very similar. Hugues de Bourbon belonged to the same subhaplogroup.  Discrepancies were found in only six out of twenty-seven markers studied, leading Lucotte to conclude that  Hugues could indeed belong to the "grande famille" of the Bourbons.

Leading geneticists, including both Professor Cassiman and his colleague Maarten Larmuseau, were not slow to offer criticism of Lucotte's conclusions.

According to Cassiman, in order to claim a relationship when discrepancies exist in  six Y-STR markers, a base of thirty-eight markers rather than twenty-seven needs to be taken into account. (The three Bourbons had discrepancies in only four markers between them).  If Hugues and the Bourbon line had a common ancestor it would have been thousands of years ago, not in the 18th century.  To be certain Y-SNP markers rather than Y-STR markers should be compared.  These did not match, so it can safely be concluded that Naundorff's descendant is not in fact a Bourbon.

DNA profile of Naundorff
The findings concerning Hugues de Bourbon were eclipsed in the media by Lucotte's announcement in 2014 of a far more ambitious project - the genetic profiling of Naundorff himself.  At the end of 2013, Christian Crépin entrusted Lucotte with a sample of Naundorff's hair, not it should be noted from the grave but taken on his deathbed in 1845. (The hair had been purchased by Crépin at the 2003 Bancel sale).  An article in Figaro announced Lucotte's intention to establish Naundorff's complete DNA profile.

In July 2014 Lucotte reported that Naundorff's mitochondrial DNA belonged to the sub-haplogroup HVO within the group HV.  The mtDNA of Anne of Romania  (profiled by Cassiman) also belongs to the HV cluster. Therefore, the possibility that Naundorff was Louis XVII was not excluded.

In December 2014 Lucotte announced that he had successfully established the Naundorff Y-STR profile.  This matched that of Hugues de Bourbon for 14 values out of 15 (not surprising really since Hugues is Naundorff's direct descendant!).  Lucotte pronounced that there was a 50% probability that Naundorff and the three Bourbons had a common ancestor in about 1300.  Even I can see this is a dubious statistic - apparently as much can be said for a fair percentage of the French population.

Comparison with Louis XVII
At this point Christian Crépin was moved to furnish Lucotte with another of his treasures, this time a lock of hair from Louis XVII himself, preserved in a  medallion which Crépin had also acquired in the Bancel sale. As with Louis XVII's heart, it proved possible to extract mitochondrial DNA from the hair sample but not DNA from the Y-chromosome.

In November 2015 Lucotte confirmed that the Louis XVII-Bancel sample was an exact match to the rare haplotype H19 of the Hapsburg women (as profiled by Cassiman). Four mutations were examined in the variable sequence HVR2: the hair sample matched Marie-Antoinette but had only two mutations in common with Naundorff. The conclusion?

Comparison with Louis XVI
In April 2016 Lucotte published a Y-STR profile for Louis XVI based on yet another hair sample.  As one might expect, it proved close to that of the three living Bourbons but completely different to that of Naundorff.

Although some of Lucotte's science has been challenged, his results are pretty much as one would expect.  The early optimism that he had established a link between Hugues de Bourbon and the Kings of France, is not corroborated by his own later research. He has verified known relationships, between Naundorff and his descendants, and between Louis XVII and his family,  but has found against the identification of Naundorff with Louis XVII.  The opening of the grave in Delft in 2004  has yielded no further information but merely added a new mystery: if the individual buried there is not a member of the Naundorff family, who is he?  And where, more to the point, is Naundorff???

Articles by Lucotte in the International Journal of Sciences
https://www.ijsciences.com/pub/author/TVRJd01n