A visit to the Madeleine Cemetery in 1793

On 18th February 1793, barely three weeks after Louis XVI's execution, an intrepid young woman set out in her carriage for the Madeleine Cemetery to see the King's grave for herself.  She left an extraordinary first-hand account was first published by Louis Hastier in the Revue des Deux Mondes for 1951.

The woman in question was Angélique-Catherine Charton, née Chauchat (1759-1849), wife of Jean Charton, a member of a prominent family of Lyon silk designers.  Her husband served  as a Commander of the National Guard and then colonel in a Regiment of the Line, but in June 1796 he too was to fall victim to Revolutionary justice,  guillotined on the place du Trône-Renversé, and consigned to a communal grave in the Picpus cemetery.  Angélique-Catherine herself  lived a long active life, dying in 1849 at the age of ninety.  She was one of the founder members of the committee which acquired the Picpus Cemetery as a place of memorial and, in the last decade of her life, acted as president of the Picpus Society.


Here is an English translation.
The gravedigger whom Mme Charton encounters can be identified as Étienne-Pierre Joly,  later custodian at both Errancis and Monmartre, who was present at Louis XVI's exhumation in 1815. The details given entirely corroborate the later testimony concerning the location and circumstances of the burial:  the body, still in its shirt, waistcoat, breeches and stockings, was placed in an open coffin, and buried with a covering of quicklime at a distance of about ten feet from the wall of the cemetery.  Joly implies that the pit had not quite been dug to the required depth of twelve feet by the time the burial party arrived. The only significant departure from the  later despositions is Joly's statement that he positioned the King's head by his neck rather than between his legs. 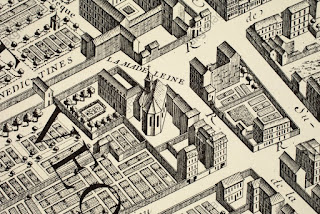 I arrived at the Madeleine church.  A low mass had just begun; I heard it for the King.  Not that I allowed myself to pray for his soul; I would willingly have done so but my longstanding plan was to see where he had been buried. An usher past by me, offering each person a little candle to burn in honour of the Virgin.  I asked her where the cemetery was and whether it was open.  She replied that she didn't think so, but would inquire.  I asked her to talk to the keyholder and she left.

Ten minutes later, she came back to tell me that entry would not be possible as the gravedigger, the only person who had a key, had gone out to the faubourg Saint-Germain.

I asked her if she had seen the place where the King was buried - Yes;  Had he had been taken into the Church? - No.   Did people come to the cemetery? - No. No-one dared, she said. The King had caused  trouble for many people; besides a lot of women had masses said for him.

I wanted her to take me to the gate. - The burial place is under the wall, she said.  You will see once you are inside.  I had her put in my carriage.  Once we had arrived, the gravedigger appeared. My good woman recognised him.  I asked him to open up.  "Willingly, Citizeness!" said he and he opened the gate.

I was trembling from head to foot.  I entered reverently into the last resting place of the best of men, his only refuge from so many troubles.

The area is about half an arpent [a little less than half an acre].  The gate is in the rue d'Anjou-Saint-Honoré.  Unfortunately a man in Jacobin dress, with untidy black greasy hair and  a pipe - he looked like a spy -overheard my request and followed me in.  Never has a man caused me so much distress; he almost reduced me to tears.  He twisted all my questions.  I will record them exactly, as well as his own in response.  In the course of the conversation, several old women and children also entered the cemetery, then a tall heavy man, and finally Bérard my coachman.

Gravedigger: Citizeness, go along to the left and you will find the grave at the side of the wall.

Me: I thought the grave would be bigger.

Gravedigger:  I was ordered to make it larger, but the order only came to me on the Sunday night and, since I could not work at night, I did not have enough time.

Jacobin:  I bet that is not even seven feet.  He paced out the length and width:  Is that one of his bones?

Gravedigger: No Citizen. There are none to be found any more.

Jacobin:  His bones were tough enough to still be here.

Me:  They say he was entirely consumed in twenty-four hours.  Can you tell us exactly what you did and what happened?

Gravedigger: Absolutely Citizeness. From  start to finish.  When they arrived I was still in the pit.  I got out quickly, and set to work with my spade on that pile of quicklime over there where you can still see the traces: there were five bags of lime pellets.  I mixed the lime into a paste, and with the help of another man, poured water on it so that it started to boil.  The wooden coffin was there on the side, the great basket next to it.  The gate was shut.  At one end, by the feet, were two deputies. Here stood three priests, our vicaire and two others, with a silver cross. Then came the national guardsmen, and that was all, since they were afraid something bad might happen.

A child turned a cartwheel on the spot he showed us.
- Got away; this spot isn't happy enough for dancing, said the gravedigger. Look, his head was there.
I put forward my toe, trembling: - What, just here?

Gravedigger: Yes, just there.  But to go back to my story, when everything was arranged as I have said, I pulled the body from the basket.  I wanted to untie his hands which were bound behind his back, but the deputies absolutely refused to let me.  So I put him just as he was, fully dressed, into his coffin.

Me: What?  He was dressed?  They all say that after he was executed, he was robbed, and that his clothes were torn to pieces and sold.

Jacobin:  That is a dirty lie.  I was there, by the guillotine, as close as I am now to the pit, and I defy the boldest liar to say that a single hair from his head was touched.  It was only the redingote, which he himself took off before mounting the scaffold, that was taken and torn.

Gravedigger: That's true.  They hadn't cut off a single hair. His hair was curled and still attached with a comb which is buried down there as well.  I laid him out in his wooden coffin.

Jacobin: Good grief - did he deserve a coffin of gold?

Gravedigger:  That is not what I said, Citizen.  It is Madame the Citizeness who asked me to give all the details.

Me:  Yes, please.  But tell me, haven't there already been other people who have asked the same questions as us?

The Jacobin grimaced at the plural, which associated his curiosity with my own.

Gravedigger:  No, Citizeness, you are the first.
Me:  That surprises me I replied.  People from this area have the opportunity.

Gravedigger:  He was missing only his shoes.  He had a slightly dirty white waistcoat, his shirt of course, grey breeches and silk stockings.  Afterwards I picked up his head which I placed on his neck.  His eyes were open.  Then we lowered him onto the bed of bubbling quicklime.  The priests came forwards and said their prayers.  Then we put the lid on the coffin, and added water and more lime pellets on the top and sides.  Finally there was the earth which you see.

The Jacobin started walking on the tomb again.

I seized my courage.  I wanted to do the same, but in a different spirit.  He was profaning it.  I wanted to count the paces to check the size - 1,2,3 to 7, then, making the sign of the cross, I counted 1, 2, 3 wide.  Before leaving this sad place, which I felt like I could never leave,  I asked to see the graves of the men of 10th August and the those killed at the royal marriage.

It was the all the same gravedigger, said he, that is to say  myself.  The King effectively lies next to the men of 10th August.  There were 116 of them.

- I hope, said the Jacobin, that you separated the Suisses from the patriots. You mustn't mix up aristocrats.

- No,  said the big man who had just entered. There were neither aristocrats nor patriots;  they were all drunk before and dead afterwards.

- In any case, added the gravedigger, they were naked;  I couldn't tell anything.

- For myself, said the man with black hair, I know an aristocrat, dead or alive.

I asked the man several questions concerning  the moment of the King's execution.  He replied very honestly to all. What he said agreed with the facts I have noted above.
I asked him if it was true that the cavalry had played Marlborough bringing the body and  Ça ira on their return. He replied that nothing could be more true.

The gravedigger then showed us where he had buried the dead of the rue Royale.  There had been 133 but they were not all there, since many of the bodies had been claimed by their relatives.  This grave is a long way from the King.

When I took out my wallet to thank them, my two assistants kept their distance.  The gravedigger came up close to me to receive his remuneration and thanks.  He said to me very quietly, for the dark man was at the gate: "Madame, if it was not my livelihood, I would never have agreed to bury the King.  It caused me a great deal of pain, but I wasn't able to refuse, I assure you.

My friend, I said, you have done no wrong; on the contrary, since he was already dead;  in all this, you were the only one to do him any service.

Ah! Madame, replied the good man;  if you believe that, so much the better.

I got back into my carriage, waved to the dark man and left.