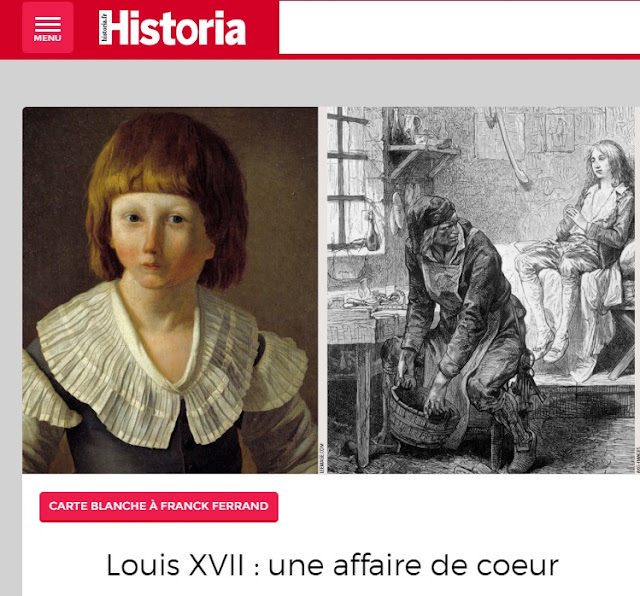 This month the popular magazine Historia has published an article by Franck Ferrand on Louis XVII and the pretenders. The occasion is the twentieth anniversary of the press conference of 19th April 2000 which announced the result of the DNA analysis of Louis XVII's heart. This, Franck writes, should have resolved any doubts and marked an end to the speculations of the survivalists. Yet the supposed descendants of the child in the Temple continue to make themselves heard....

It was at the invitation of Delorme ("mon confrère Philippe Delorme") that Professor Cassiman confirmed to an electrified audience, that the heart undoubtedly belonged to "a relative of Queen Marie-Antoinette".  The geneticist was careful to add that it was up to historians to establish that this relative was indeed Louis XVII.  To Philippe Delorme this was only a formal caveat;  his research had proven beyond all doubt that the heart was the one removed by doctor Pelletan in June 1795,  rescued by his son in February 1831 and finally given over to representatives of the legitimate Bourbon line.

At the beginning of the new century, after 200 years  of investigations and more than 800 books, it therefore seemed proved that Louis XVII had indeed died in prison as the great historians of the 19th century, Beauchesne and Chantelauze, had demonstrated . However, researchers have claimed that  two hearts, that of Louis-Charles and that of his elder brother, the dauphin Louis-Joseph, had both been in the possession of the archbishop of Paris and could have been confused.

In a episode of the radio programme La Curiosité retourne à l'école, broadcast on the 7th of this month, Franck clarifies.  If would be an unlikely chance if the survivalists were right and the hearts swapped; but since the possibility cannot be absolutely discounted, the mystery is saved.  The fact that the remains  discovered in the Cimetière Sainte-Marguerite "incontestably" belong to an older child, adds fuel to the flames of controversy.

On several occasions Franck has given a voice to the survivalists in his broadcasts and they have enjoyed a great deal of media coverage.  Twenty years on he is forced to admit that the arguments against Philippe Delorme's case are slender, but still tenable.  It has been pointed out that the heart of Louis Joseph had been embalmed whereas the one examined in 2000 was not.  But there are still pathologists prepared to cast doubts on its condition .... And why not?  It would be pleasant  to believe the stories of  the prisoner's escape and the substitution of another child.  The excavations at Ste-Marguerite, in 1846, 1894 and 1904, have only produced the remains of a boy who was too old to have been Louis Charles.  This has greatly encouraged the survivalists, most of whom defend the pretensions of a particular candidate.

There have been so many  individuals who have appeared out of nowhere claiming to be the son of Louis XVI and Marie-Antoinette -  more than a hundred appeared in the first decades of the 19th century when the scars of the Revolution had not yet healed.  Many of them took their naive arguments from Regnault-Warin's novel Le Cimetière de la Madeleine.

The most famous pretender in his own lifetime was the Baron de Richemont. Without descendants, he lost his partisans little by little.  His great rival Naundorff had  been more fertile.  His descendants obtained the right to the name de Bourbon, a right confirmed in 1913 by the Court of Appeal in Paris.  However, as early as 1998, Professor Cassiman's analysis of DNA from the arm bone of Naundorff excluded the possibility that he was LXVII.

In 2014 for the programme L'Ombre d'un doute, Franck met a descendant of Naundorff from the younger generation.  Hugues de Bourbon - his legitimate name - seemed to him to demonstrate a humility and honesty that his partisans do not possess.  He waits with impartially for historians to give their verdict on the affair which is of paramount importance for him personally and for his family.  At the time of filming he wanted to put an end to the old quarrel;  a famous geneticist had given him the results of new DNA tests which seemed to contradict the conclusions of 1998.....

Even without Naundorff, there are still many solid contenders to be Louis XVII. Franck gives  the example of  Pierre  Benoît who seems to him the "most convincing" of recent candidates:
.
In 2013 Jacques Solppelsa, a career diplomat, was a guest on Franck's radio programme Au coeur de l'Histoire. Whilst working in Argentina, he had come into contact with the descendants of  Pierre  Benoît.  Although Benoît never claimed to be Louis XVII, he  had a troubling biography.  He was visibly obsessed by Louis XVI and Marie-Antoinette;  he had been escorted to Le Havre on his departure from France by the duc Decazes personally and introduced into the highest social circles in South America; he was deeply very affected by the death of Madame Royale in 1851.  He was assassinated in the following year by a certain Dr Lavergne, who had previously blackmailed that princess...Jacques Soppelsa was totally convinced that Pierre Benoît must be the child in the Temple.


Many other theories as to the fate of Louis XVII have been put forward over the years.  Some historians  - for instance Léon Creissels between the Wars - thought that Louis XVII had been rescued but in a poor psychological state and that he had subsequently died anonymously.  Others agreed with Philippe Delorme and the great majority of experts, that the young king died in the Temple consider that his death was earlier than 8th June 1795.  Franck has recently received a thorough exposition of this theory by Juliette Pacull  [L'Enfant du Temple, Lulu, 2019]. She sustains the thesis of Louis Hastier, repeated by Georges Bordonove in 1995, that Louis XVII died at the time of the departure of the Simons in January 1794; it was at this point that the laundress of the Temple ceased to receive his dirty laundry.

Franck ends with a quote from Juliette Pacull, to the effect that the affair is now officially closed and will never be reopened. How sad to think of the child's remains, lost forever in the anonymous soil of a Paris cemetery.