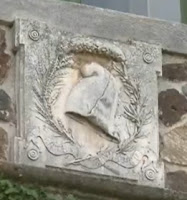 In contrast to La Grange, the Château de Chavaniac in the Auvergne, Lafayette's birthplace museum, has been open to the public for many years. Although Lafayette never lived there for any length of time as an adult, he visited periodically -  in 1770, 1783 and 1786; then in 1789 and on his return to France in 1800, before taking up residence definitively at La Grange. The medieval manor house had been completely rebuilt in 1701 following a fire and was enlarged in the first half of the 18th century.  In 1791 Lafayette himself had the building modernised by the architect Ambroise Laurent Vaudoyer assisted by the painter Albert Ancica. The work concentrated on the grand salon "des philosophes", which was conceived as a shrine to the Enlightenment, and the boudoir of Madame Lafayette, both situated on the first floor.  In a spirit of naive optimism, Lafayette had a stone from the Bastille, adorned with a Phrygian cap of liberty, replace the Lafayette coat-of-arms over the main door.

Chavaniac remained in the Lafayette family until 1916  when it was bought from the indirect descendants of the last marquis by the Scotsman John Moffat  on behalf of the "French Heroes' Lafayette Memorial Fund", an American foundation which raised more than  $50 million to help French soldiers and victims of the First World War .The fund committee hoped to restore and preserve the château as a memorial and archive of French-American friendship.  Moffat and his wife took up residence and pursued the fund's relief work, creating an orphanage and  a pioneering "preventorium" for  children with TB. They are said to have welcomed more than 25,000 children. They added a school, dormitory, and dairy farm.  The nearby village of Chavaniac became Chavaniac-Lafayette in 1957.  Moffat himself died at the age eighty-one in 1966 and is buried at the foot of the chateau's front terrace. 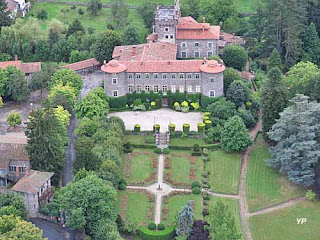 Starting in 1917 the Memorial Committee began a series of restorations and new construction work, under guidance of the municipal architect Achille Proy.  The roof was replaced, the foundations stabilised, the tower rebuilt and a south wing added, which had the effect of restoring the medieval silhouette.  The interior was reorientated around the main salon and utilities connected. 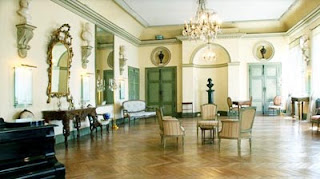 In 2009 the Memorial Committee was finally dissolved and the Department of Haute-Loire took over direct control.. Following the Lafayette 250th anniversary celebrations in 2007, theycommitted to a major programme of further restoration. The first phase, now successfully completed with the aid of local sponsorship,  was the boudoir of Madame Lafayette. A Departmental brochure issued in 2010 estimated the cost at 160,000 euros and featured dispiriting pictures of peeling salmon pink paint and hanging wires.  Now the wall panels, beautiful 18th-century parquet flooring and fine furniture have all been beautifully restored. The most significant feature of the room is the gorgeous Reveillon wallpaper - bought for Chavaniac in the early 20th century but dating from the 1790s. There are 14 panels in all, including not only classic Reveillon arabesque wall panels, but also a set of elaborate cameos that go over the doors.